The Sophisticated Engine Brake for Diesels (on an ‘07 Chevrolet Duramax).

A COMMONLY OVERLOOKED PERFORMANCE ENHANCEMENT FOR diesel trucks is the braking system. Some diesel owners tend to obsess over creating more torque and horsepower for their truck in order to increase speed, enhance towing power, or both; therefore neglecting to consider how to bring that added power to a stop. Banks has an elegant plug and play solution to the braking dilemma-SpeedBrake.

The SpeedBrake utilizes the Banks PowerPDA to communicate with the truck’s ECU and take control of the braking action for you. Note: The PowerPDA used in this article has been updated with the Banks iQ > The SpeedBrake can control the variable geometry turbo vanes, the torque converter clutch application, and the Allison 1000 transmission’s gear selection, all in the effort to control the speed of the vehicle without the use of wheel brakes. This preserves the longevity and serviceability of the truck’s service brakes.

With a system designed to control the truck’s ECU, turbocharger, and transmission, we were anticipating a very extensive installation. Fortunately, we were wrong. The SpeedBrake took less than one hour to install with just a few handtools. The installation instructions are well-written, detail-orientated, and easy to follow. The best part is that the installation required no cutting, welding, or wire splicing. The SpeedBrake is a far cry from conventional exhaust braking systems.

We began by routing the SpeedBrake’s cable harness from the fuse box (where the module would eventually be mounted) down to the transmission, over to the ECM connections, and down to the rubber grommet pass-through on the firewall.

The first electrical connection is made down at the transmission. It was the most difficult part of the installation because of its mounting location. The next connection is at the ECM harness. We disconnected the 24-pin black connector by lifting the blue locking ring on the connector and separating the halves. Then we inserted the black connectors from the Speed8rake harness and secured them with the blue locking ring. Then we connected the ground ring from the SpeedBrake’s harness to the ground lug on the firewall.

There are two connectors that need to be passed through the firewall into the cab of the truck. A trick we used was to tape a zip tie to the end of the cable bundle, extending about 5 inches past the connectors. The zip tie is easier to fish through the grommet and provides a safe end to grab with a pair of pliers to pull on to get the rest of the cable into the cab.

After mating the two connectors inside the cab, it was time to mount and connect the SpeedBrake module to the harness. The module mounts to the fuse box via hook and loop fasteners, and its application could not be simpler. We cleaned both mounting surfaces with the alcohol wipes provided, removed the adhesive backing from the hook and loop tape, and secured it in place with light hand pressure for 60 seconds. The final installation step was to connect the module to the harness. After all of the mechanical assembly was complete, we loaded the SpeedBrake software into the PowerPDA and we were ready to hit the road. It really was that simple.

The SpeedBrake has two primary modes (besides Off, of course). They are On and Speed Control. Each mode has its own complement of settings to allow for driver preference. The On mode will slow the truck down whenever the driver lets off of the accelerator or depresses the brake pedal, whereas Speed Control will decrease the truck’s downhill speed until the preset speed (between 25 and 75 mph) is reached.

The On mode has three strength settings – High, Medium, and Low – which are used to compensate for variations in the truck’s loaded weight and driver’s preference. The High strength setting is the most aggressive and offers the highest level of braking activity by aggressively downshifting the transmission and closing the turbocharger vanes in order to decelerate the truck to 15 mph. It is intended for use when the truck is heavily loaded.

The Medium and Low strength settings also slow the truck to a target speed of 15 mph by downshifting the transmission and controlling the position of the turbocharger’s vanes – just less aggressively than the High setting.

With the SpeedBrake’s mode set to On and strength set to Low, we headed out to test this new braking system. The system was installed on an ‘07 Chevrolet Duramax Crew Cab longbed 4×4 with a 6-inch lift and 35-inch tires that tips the scales at nearly 8,000 pounds.

The SpeedBrake worked phenomenally to reduce the speed on the big truck Immediately after lifting the accelerator pedal, the SpeedBrake begins working. It senses the rate the truck is decelerating, and if it is not slowing down fast enough, the SpeedBrake will choose to downshift the transmission, control the torque converter, or close the turbocharger’s vanes-or all three-depending on the situation, to reduce the speed of the truck to 15 mph. We tried all three strength settings: Low, Medium, and High, and they all performed as described, with the difference being the aggressiveness of the braking application.

With a lightly loaded truck set to the highest breaking strength, you better have a good dental plan, because you will eat the steering wheel if you are not bracing yourself for the aggressive braking action, After testing the On mode, it was time to test the Speed Control mode.

The SpeedBrake’s mode was set to Speed Control and the target speed was set to 35 mph. We made several runs down a modest hill to test the ability of the unit to maintain the desired speed. This mode worked flawlessly. On each run, we crested the top of the hill at 44 mph and lifted our foot from the accelerator. Within 35 seconds of each test, the speed of the truck was reduced to 34 mph, which was 1 mph below the target speed.

The collage illustrates the SpeedBrake’s effort to reduce and maintain the target speed of the truck during this test.

The SpeedBrake software and PowerPDA provide two-way communications between the user and braking system. The SpeedBrake settings are adjustable on-the-fly and provide constant feedback on the truck’s parameters, such as speed, braking effort, transmission temp. SpeedBrake mode, brake level/braking speed, gear, engine temp. and system status. An additional handy feature of the device is its ability to read and clear OBDII codes from your truck’s computer.

So, if you are ready for a new era in exhaust braking-slow down with SpeedBrake.

The truck’s service brakes were never applied during this test. The SpeedBrake was set with a target speed of 35 mph. The truck crested a 1-mile-long hill at 44 mph. Within 35 seconds, the SpeedBrake reduced the vehicle’s speed below the target of 34 mph and maintained it. 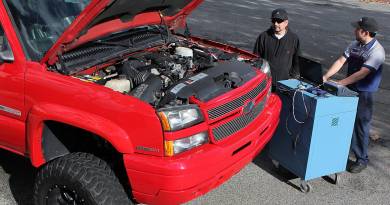 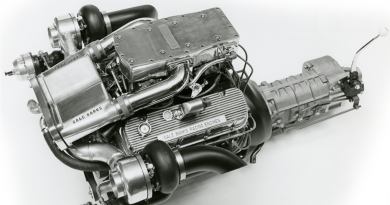 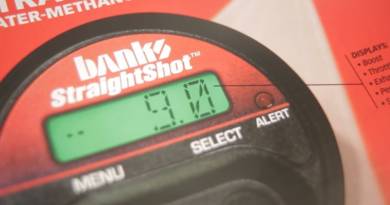