At least one magazine calls them Pro Tourers: a new kind of hot rod with big wheels, very low-profile tires, big brakes, super-tuned chassis, a five or six-speed manual trans, and plenty of horsepower. In other words, a hot rod that drives in something other than a straight line and for distances longer than a quarter-mile—much longer.

The ’68 Camaro under construction in our Race Shop is just such a vehicle. It sits on a chassis jig right next to Rick “Speed” Lefever’s incredible Mercedes 500-SL quad-turbo Pro Mod race car, and Speed splits his shop time working on both vehicles. We’ve been bragging so much lately about our Project Sidewinder Dodge sport truck—the World’s Fastest Pickup, period—that we’ve pretty much overlooked the Camaro project. Heck, it doesn’t even have a name. But it’s pretty incredible, too.

The trouble is, you really have to look to see what all has been done to it. I wouldn’t call this car subtle. But a lot of the modifications are not readily apparent. And Speed is not one to buy a part when he can make it himself. I can’t begin to tell you how much of this car is hand-fabricated.

It began when Gale’s son Andrew acquired a very scruffy ’68 Camaro a little before he began to drive. It was just a bare body shell at the time, but he and a friend were going to fix it up and make it Andrew’s high school driver. But one thing led to another, and it became a full-on Banks project. Andrew’s been out of high school for several years now.

At my house, we call it “we could syndrome,” especially when it comes to car projects with me and my son. You know, “We could do this…and we could do that…”. Some of it gets done, lots don’t. When Gale gets going on “We coulds” they can get pretty radical in a hurry. But they usually get carried out—eventually. To say this car is overbuilt is an understatement (just take a look at the rear end housing—and that’s only what you can see on the outside). That’s why it’s been in the project stage quite a while. But this week’s news is that it’s finally on wheels and tires and has a December date set with the paint shop. After paint comes window glass and then upholstery.

The main mechanical component left to build is the engine. It is currently comprised of an iron, 4-bolt main Oldsmobile Rocket small block and a pair of GM Performance splayed valve, symmetrical port aluminum heads. A pair of high-flow, compact Garrett turbos are in place, and they will blow through an electronic fuel injection system as yet to be determined. Same for the crankshaft, so we don’t know exact engine size, but it will be over 400 cubic inches—probably 427. And horsepower numbers anywhere from 800-plus to 1600 have been bandied about, but I’ll bet it’s toward the higher end of that range.

Will it run over 200 mph? We already did that on Mrs. Orcutt’s driveway with much less engine. With a twin-turbo 454 in a stock-bodied Firebird, Gale ran close to 300 mph at Bonneville. But the real beauty of this project car is that it will steer and stop, too. It has ground clearance and creature comforts for cruising cross-country. Which is exactly what it’s intended to do—Pro Tour.

We said it’s slated for the paint shop, but we didn’t mention what color it’s going to be. Come now, do you even have to ask? They’re sending over several samples of red sometime next week so Gale can choose one. 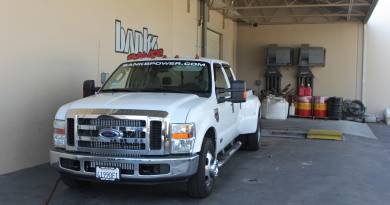 Adam Carolla puts Banks Power on his own truck

November 26, 2012 Banks Power Comments Off on Adam Carolla puts Banks Power on his own truck 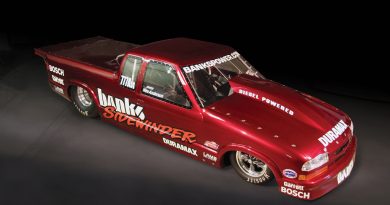 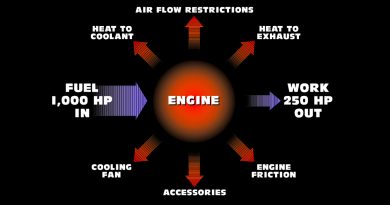