MOTOR PRESS GUILD Luncheon Meeting with Bosch and Banks. Listen to the audio!

Photos:  By Pete Lyons and Albert Wong courtesy of MPG

Even though it was not open to the general public, the Motor Press Guild’s September luncheon meeting was deemed a “sell out” with over 100 members and guests in attendance and additional tables and chairs called for not once, but three times before everyone was accommodated. 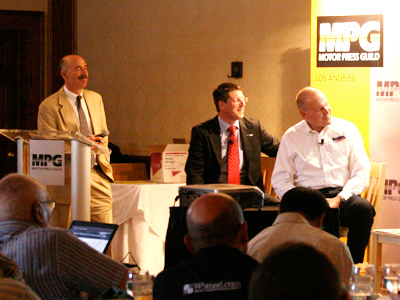 Click above to listen to Stewart, Ullrich and Banks at the meeting.

The subject was Diesel, Clean Diesel to be more specific, and the two invited experts sitting in the speaker’s chairs up front were Gale Banks and Lars Ullrich.  Respectively they were: the President/founder of one of the best-known American engineering and aftermarket engine upgrade companies, Banks Engineering, and the Director of Marketing for Diesel Systems Bosch North America.

Veteran magazine editor John Stewart did the honors as moderator for the panel.

Young engineer-turned-marketer, Ullrich, talked in real world terms about the past, present, and future of Clean Diesel technology.  “Clean-Diesel vehicles are good, clean and fun to drive,”  he told the group.  “They achieve an average of 30 percent better fuel economy than their gasoline-powered equivalents. In addition, clean diesel emits 25 percent less greenhouse-gas emissions. With ultra-low sulfur diesel fuel and the new clean diesel technology, it also meets emission requirements in all 50 states. 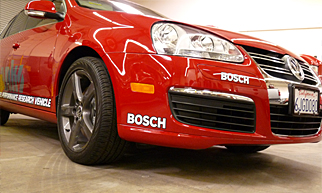 Ullrich also provided some well-researched data showing that the total cost of ownership of a Diesel-powered automobile was from 20 to 25% lower over the lifetime of the vehicle.  In looking into the near term, and as the yet-to-be-finalized 2015 regulations, Ullrich indicated that, from his perspective, Clean Diesel was one of the best available technologies for the challenges facing manufacturers.

Banks gave the packed audience a quick overview of some of the engineering and motorsports involvement that his company is working with to advance the understanding and subsequent use of Clean Diesel power.  With a background in high performance engine design and modification stretching back some 50 years, he and his company remain on the frontier of research and development in harnessing the strength and efficiency of the Clean Diesel to the needs of today’s drivers. 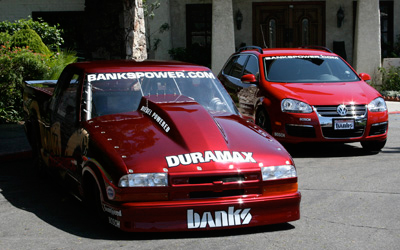 Banks had brought both his personal road Jetta TDI and his racing Sidewinder S-10 to put on display at the meeting.  The Jetta featured a few prototype Banks performance upgrades, intake and exhaust being two of the areas.  And of course, the Drag Truck was the real thing, the record-smashing 7.77- second, 180 mile-per-hour, fastest diesel on the strip.  Both vehicles got plenty of attention from media and public alike, being parked pretty conspicuously in the circular front drive of the popular LAX-adjacent restaurant where the meeting was being held.

A self-proclaimed “futurist”  Banks also talked about a ways to alert the buying public to the features and benefits of the new breed of machines.  “All I can tell you is that I just bought a Jetta TDI SportWagon for my daily driver.  Me, Gale Banks, driving a 2-Liter compact wagon, and having the time of my life … You’ve just got to drive one to understand.”

Banks and Bosch have partnered on a number of advanced automotive, truck and marine engine projects.  As in the case of the S-10 the two companies have also teamed up on powering all-out competition vehicles as well, and, in the process they have set many national and world speed/time records. 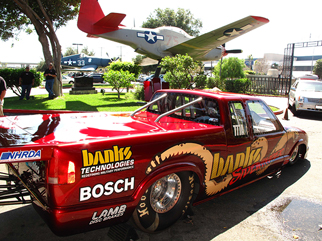 In the end Stewart became more of a timekeeper than a moderator in attempting to accommodate the many hands raised in the Q&A session and satisfy the rules of the road trying to get the meeting adjourned by 1:30 PM or so.  Stewart did an outstanding job with the official time limits, but as soon as he thanked everyone for attending (especially on a day following a 3-day holiday weekend) the front of the room was swamped with MPG members who kept both Banks and Ullrich engaged and answering their questions until quarter past 3.

The Los Angeles-based Motor Press Guild (aka “MPG”) is the largest automotive media association in North America. This exclusive, non-profit organization is dedicated to upholding the highest ideals in automotive journalism and promoting education and information exchange within the motoring press. Members include print journalists, photographers, broadcasters and new media professionals, as well as public-relations representatives, consumer groups, and governmental bodies tied to the automotive industry.