How much do you want to know about wastegates and variable geometry turbos? Lots? Then give this a read. Plus, gain some insight into the engine that powers Jay Leno’s crazy behemoth known as the tank car. There’s HOT ROD POWER TOUR info too!

By-Pass: Better out than in

A couple of weeks ago I started talking about the… (How can I say this shorter?)… Banks Marine Super-Sequential Twin Turbo Duramax Diesel Power Engine again. I went through the reason for going to a super-turbo combo and that it wasn’t just by accident, but purely by design. I had also said that the entry was going to be about the actual arrangement of the two, but I lied. Instead I’d like to talk a little about actuation first. So, get cozy with a favorite beverage while ‘ol Uncle John learns ya something.

There are three ways of actuation used in controlling power output on a forced induction application: hydraulic, pneumatic, and electric. Each of the ways have their own attributes, and their downsides. Honestly, we have a good deal of experience with each of them on various products and projects. 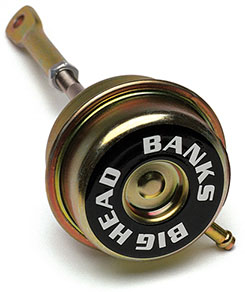 The simplest of these types of actuation in a turbo set up is a wastegate actuator, which is used primarily to open a bypass or gate in the turbine housing at a given pressure. A canister atop the contraption fills up with air siphoned off the compressor housing, which in turn fills the area inside pushing against a spring and diaphragm combo. The spring is calibrated to a specific setting due to its stiffness. What this does is fill it like a balloon and moves the actuation rod. Depending on the spring’s setting and the actual rod length you will get the desired boost level from the turbo. In some cases it’s pretty darn simple to adjust. When I say simple I mean that you make the actuators rod longer or shorter, depending on the desired boost pressure produced by the turbo. In some cases that won’t really work too well because the spring on a stock wastegate actuator can be pretty weak, causing the gate to be blown open under situations where you wanted more boost… leaking potential power. To fight this and get the diesel performance that we’re looking for in our older kits we created the Banks Big Head Actuator line. Those Big Head Actuators had the right spring and rod setting (calibrated) and were a bolt-on in the basic sense. They matched what we wanted the stock turbo to do exactly giving the right boost for the fuel and timing we commanded. This solution was great on a normal, fixed geometry turbo. 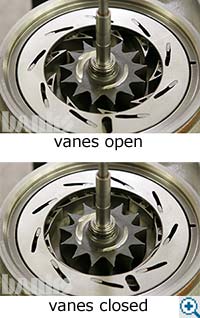 Now we move on to where it gets tricky: the precise control of a turbo that has a variable geometry.  I’ll start by talking about what VG really is, and why it’s so important to control. A fixed geometry turbo is just that: fixed. It only comes in one size as far as the volume of exhaust it’s able to hold, which in turn works to set the turbo’s performance potential and… both power and responsiveness. Size a turbine housing really small and the sucker will come alive really fast producing boost early, but often peters out because you’ll have to wastgate a ton to stop the turbo from over speeding. Size the housing mid size and you can get decent low end response but mid range is where she’ll shine. Make it too big and it has the potential to create a lot of power… but does so way later on in the RPMs and is otherwise pretty sleepy down low. A variable Geometry turbo’s turbine housing can be all of the three, and any size in between. Think of the turbine housing as being a magic drinking cup, one that can be the size of a Dixie cup one second and a 128 ounce tub the next. Since this thing can morph its size it’s important to keep it under control at all times, because not doing so can have disastrous results in three major areas: fuel, timing and turbo speed. I won’t go into the mess that can be caused by ‘em here, but let’s say holes burnt into pistons and blown up turbos can be detrimental to an engine’s performance.

We started controlling VG turbo systems back in 2001 in our Sidewinder Dakota landspeed race truck. In that particular application we wanted all out speed, but still desired drivability on the street since the goal was to actually drive the Sidewinder Dakota onto the salt rather than having her be a trailer queen. The engine for that project was an ’03 Cummins common rail injected diesel engine (yes… the project was in ’01 and we had an ’03 engine: we’re time travelers) and the turbo we chose for it was… well… suppose to live on a 14.5 liter turbo diesel engine used in big rigs. It was quite large, but we needed that for all the top end power we’d have to make if we wanted to break the speed record. At the same time we needed the turbo to be responsive enough for normal street diving. The turbo’s VG actuation was done pneumatically, kinda like the wastegate actuator described above but moving vanes that direct exhaust gasses to at the turbine instead of simple gate. The actuator has to be controlled very quickly… by computer. Usually the control for the unit is done so by the ECU, but since our engine didn’t require it in stock form there were no provisions for it. We created a stand-alone controller we called the ShapeShifter (get it?) that actually monitored the stock ECU, the throttle, and a bunch of other inputs to control the turbine housing’s geometry (‘er… size). The result was pretty stellar: 735 hp with 1300 ft-lbs of torque, over 21 mpg and a few smashed speed records. That was in ’02, and no matter how many have tried break the record it still sits on the books as being a true testament to diesel performance. (Watch the Sidewinder Dakota in record-setting action here.) 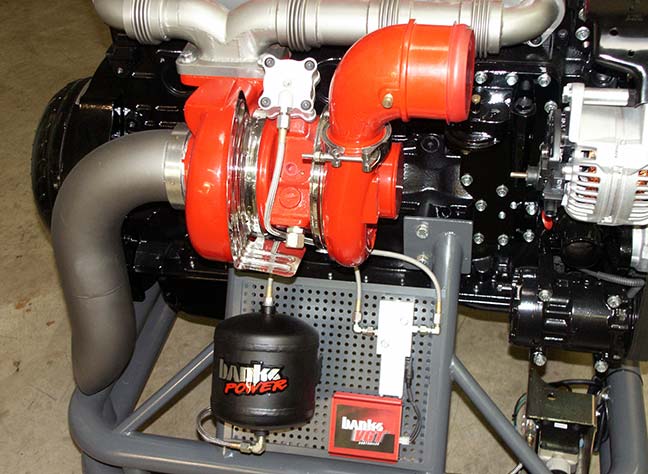 We took that Banks ShapShifter system and modified it to work with a hydraulically actuated VG turbo. An example of that type of turbo used in a stock diesel application would be the Ford Power Stroke or the GM Duramax. This turbo uses the engines oil and pressure to move a lever that in turn moves the vanes in the turbine housing. Again… computer controlled, but this time it spoke with our Six-Gun diesel tuner and adjusted the turbo while the tuner controlled fuel, timing and everything else. We adapted the new turbo system to both the Sidewinder Dakota and to a (then brand new) Sidewinder All-Terrain Dodge Ram and took them on the Hot Rod Power Tour. Both systems worked flawlessly, gave us the precision control needed. We traveled across six states and got fantastic mileage. Quite frankly… those were probably the two most powerful street machines on the tour, and they were trucks.

Another example of VG actuation is an electric actuator. This unit actually uses a motor driven worm gear that moves a rod, basically doing the same thing as both before mentioned systems to control the vanes inside the turbine housing.

So now we travel to modern day where actuation and control of forced induction applications is needed more than ever due to higher boost and emissions requirements. The stand-alone ShapeShifter VG turbo controller is still a modern piece of electronics, but with our Banks Ottomind ECU originally developed for the Duramax marine engine program we can do it all in one neat package. We can also do each flavor of control through it: pneumatic, hydraulic and electronic. We have calibrated and run complete ‘engines as shipped’ (basically a complete engine that runs in a production truck) and our bypass systems. Remember, all this was planned well in advance of the ECU’s development, so it’s all in there from the start. This means that there is no need for any add-on modules. One time while videoing the Banks marine twin-turbo engine on the dyno an experiment was caught on film running simultaneously on a table next to the engine. I posted that video and a fella with a sharp eye watching it on YouTube made a comment about the throttle body that was moving on the bench. That throttle was the supercharger bypass used in our Super-Sequential… you know. Even though we hadn’t even started to fabricate the super-turbo system we were thinking ahead to the future. More on that bypass in the next installment.

Can you spot the throttle body in this video?

I have to share something with you all that happened a few days ago that ties into a past project vehicle of ours: Jay Leno’s Tank Car. Let me start at the beginning…

Several years ago (six, I think) Gale Banks was holding his newborn grandson for the first time when his cell phone started to go off. It just happened to be his old pal Jay Leno. Feeling like the proud grandpa he of course wanted to tell his friend the good news. The conversation, however, went something like this:

And like that the bargain was struck for Banks Power to not only twin turbocharge the engine, but to also add modern fuel injection to the beast. The result of the undertaking was basically that we doubled both the power output and range. I still recall the day that Gale and Jay went for the initial test drive on the 210 freeway one Saturday morning. Naturally we took a chaser truck out to follow them “just in case”, but it quickly became an obscene display of pure military might and Banks Power meshed into one. The 9,500 pound vehicle took off like a rocket and, to all of our surprise, was now able to haze the tires at freeway speeds when the throttle was mashed. The already stout 12-cylinder Continental 810 horsepower, 1,590 foot-pounds of torque engine displayed its newly uprated 1,600 hp with 3,000 ft-lbs Banks turbo power. Impressive… I know. 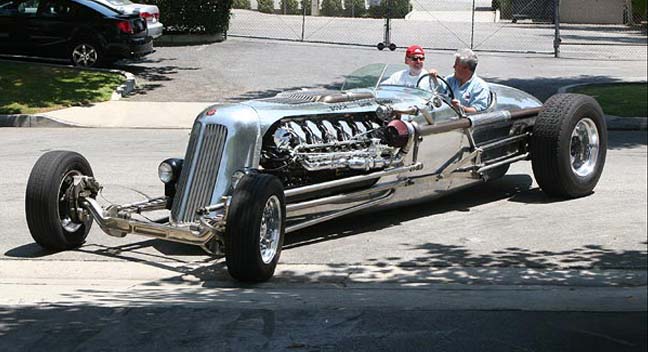 So about that now in the present day I came into position of something pretty neat, and it pretty much just dropped into my lap. A visitor dropped by to visit with Gale Banks and reminisce about old times and wanted to show his buddy around the shop. See, the fellow was a pit crew member from “back in the day” on Al Teague’s World’s Fastest Piston-Powered Bonneville streamliner, a project that Gale also worked on. He had come by a few weeks before and noticed a tank engine from that project still in our shop, and that got the brain a going. A few phone calls later he had a copy of the original ordnance maintenance manual for the 1955 Continental tank engine (models AV-1790-5A, AV-1790-5B and AV-1790-7) published by the Department of the Army. Looking at the manual it appears to be in great condition and quite the collector’s item. Years ago when we really needed this for the Banks performance upgrades we were working on this would have been a Godsend, but instead we had to dig for the engine info (where’s the time machine when you need it?). We eventually ended up having to get the same manual, only a Xerox copy of an original… which is an interesting story in itself (which I may tell at a later date). Looking at the manual it clearly says that the engine was actually meant for M46 and M46A1 medium tanks, M47 90-mm gun tanks, and T48 90-mm gun tanks.

Oddest thing… I can’t find anything in this book about the Banks Power Twin-Turbo and fuel injection system? Weird. 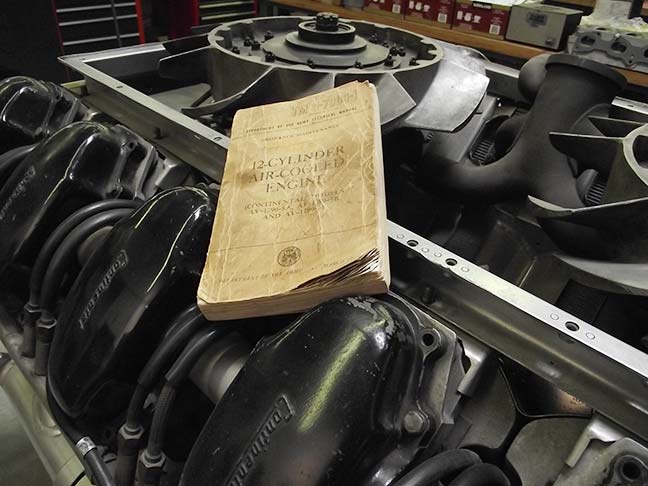 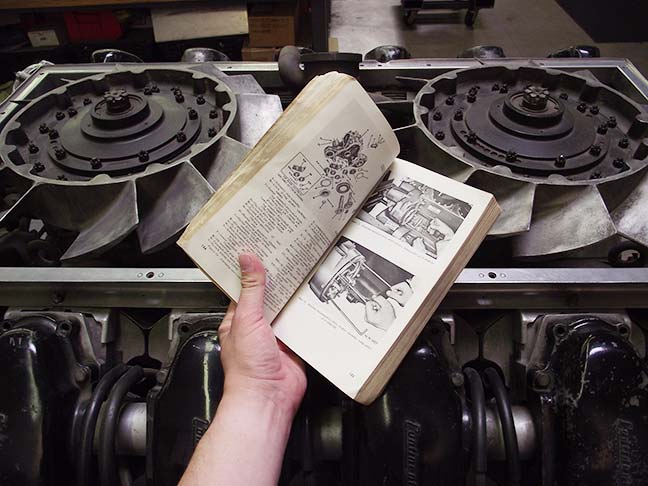 Wonder how it’ll drift with the added power? Check out this YouTube video »

That’s about all for this week’s installment. Till next time have a powerful week!