When it comes to designing an intercooler, it’s a balancing act where things could topple if it’s not done right. 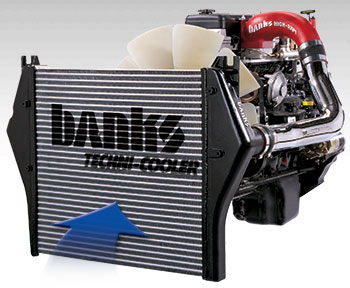 The other day we here at Gale Banks Engineering saw an ad from a competitor that touted how great their intercooler was, and that it out flowed our Banks Techni-Cooler intercooler in particular. That got me thinking: do they really know what makes a performance intercooler, or are they just not aware.

Intercoolers are interesting animals. Most of the time a factory cooler is only merely adequate and not the device that supplies frost-like, density enriched power one would expect. Mostly the actual design and performance are dictated by both the time to get a vehicle out and the money it costs to engineer all the parts that comprise the car or truck. This is where the aftermarket shines in what it can do with almost any leftovers, finding gold in perfecting the function of marginal equipment that comes standard on the vehicles we purchase. But is any change to make a change a good one? Not always, especially when it comes to intercoolers. Here performance is a balancing act where things could topple if it’s not done right. I’ll try to explain:

An intercooler is like a radiator for air, simply put, and made up of stacked tubes that the boosted air flows from one side to the other of the unit. Inside those tubes are fins that the air must travel through/around and are packed in various angles and numbers. The amount of cooling depends on the fin count and design of those fins packed into those tubes, but the flow or amount of restriction also depends on that arrangement. Think of the fins as a strainer for heat. Pack the tubes too densely and you’ll get great cooling ability because the air will stay longer in there with the heat being absorbed by the fins, but the restrictions can be a killer dropping pressure and reaction times. Pack the tubes sparsely and the flow though the cooler is great, but the cooling ability is diminished or even completely removed. Some folks make an intercooler with just an extruded tube… which gets the air through the thing very quickly but defeats the purpose all together. 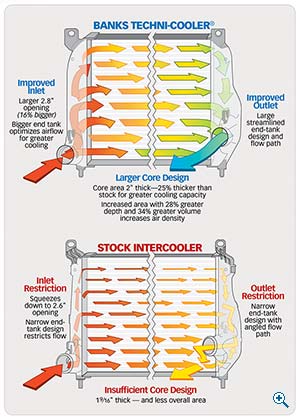 An intercooler’s ability to chill the air also depends on the space between the tubes, which is also packet with fins. These fins are cooled by the incoming air from the nose of the vehicle and effectively pull the heat from the tubes and assist with chilling the boosted air. The effectiveness of the cooling ability also depends on the fin count and design here as well. Have a bunch in-between the tubes and you have more surface area to act as a heat sync, but then your flow through the face of the core is dismal. Remember… you have a succession of coolers behind that intercooler including a radiator, trans cooler and others. Make the intercooler too efficient and it ends up being totally selfish, starving the rest of that cooler pack that needs air, causing those systems to overheat. Make the fin count less dense and the ability to cool is less, but at least the rest of the systems get air.

So you see… making a performance intercooler is an interesting teeter-totter. We actually take in account everything when making an intercooler upgrade, and all that engineering makes for the best product we can produce. When someone says that their intercooler outflows ours, well we know it has to give up performance in another area. It may flow better, but does it cool better? Remember, the function of the unit is to provide better density which will equal better power, cooler overall temperatures and increased MPG. So the question here is what is the actual density gain that the intercooler affords, not just how it flows. But, some folks just don’t get it while others keep on making claims that skirt that important performance issue.

Why play games when it comes spending your hard earned money? Isn’t improved diesel performance what you’re after? Our Banks Techni-Cooler System excels at the cooling balancing act removing restrictions and granting your truck greater airflow and density for proper fuel combustion. The result: more power and torque at any EGT… period! Pressure drop and charge air temperatures are reduced while exhaust temperatures are lowered enhancing power anywhere the engine is operating. Mash down the throttle and get results while reducing the thermal load on the engine and its cooling system. Bam! Just like that you’re now making smart, lasting power.

Towing? If it’s a boat, a horse trailer or a house on wheels you need that power to eat up the hills. With density added to your system the power remains when you need it most on long, hard pulls.

Ok, so I sound a bit like a commercial… I know, but it’s all true. The point is to reap all the benefits of doing the job right and protect your investment at the same time. I’m going to make these points about our system then I’ll bring you back to the program all ready in progress:

• Banks’ boost tubes (which come with most of the kits) are larger than stock, streamlined to reduce the number of bends and eliminate flow impeding crimped spots
• The actual Techni-Cooler core is designed to increase the density of the boosted air by an average of 10%
• The Techni-Coolers core area is about 25% larger than stock for even greater cooling capacity
• The larger cast aluminum end tanks are painstakingly designed through CFD analysis to improve airflow in, across the fins and out of the cooler reducing loss and increasing performance. (Learn more about what CFD is and why it’s important below.)
• Melting or bursting of the stock unit caused by heat and extreme boost pressures is gone because of the rugged, all-aluminum design. No plastic tanks to sweat over
• Denser air charge leads to better fuel burn which will also result in better economy

Yes, we think (and know actually) that we have a great intercooler product in our Banks Techni-Cooler, which results in better diesel performance overall. Next time you look at intercoolers I hope that you see them a bit differently, and know that this is one case where high-flow isn’t the most important part of the power equation. Till next time, have a powerful week. 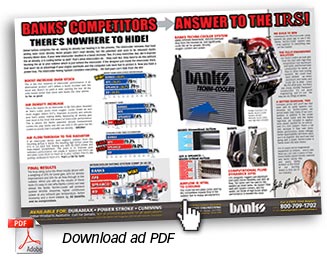 Click to see more
in the Diesel Power ad!