Perfect! It’s Halloween week and we get to strap the Great Pumpkin (Trike Bike) down on the Banks Engineering “rack” … er Chassis Dyno. Sneak a look (if you dare) at one of Las Vegas Trikes’ latest masterworks of motorcycling mayhem … All hooked up and bristling with some monstrous Banks Twin Turbo hoss-pawer!

EPILOG: It WAS, after all, Tuesday, the 27th of October, and Halloween WAS only a few days off … So having about as “scary” a machine as we’ve ever had on the Banks chassis dyno for the day was pretty well par for the course and (as everyone on staff agreed) right in keeping with the “season”.

A very special Banks Twin Turbo gasoline engine had come back home for a little workout on the dyno and a quick checkup. Built especially for the renowned Las Vegas Trikes shop in ‘Vegas, this small-block with the big kick was in shop here to fine tune it’s performance right in place in its trick trike chassis. 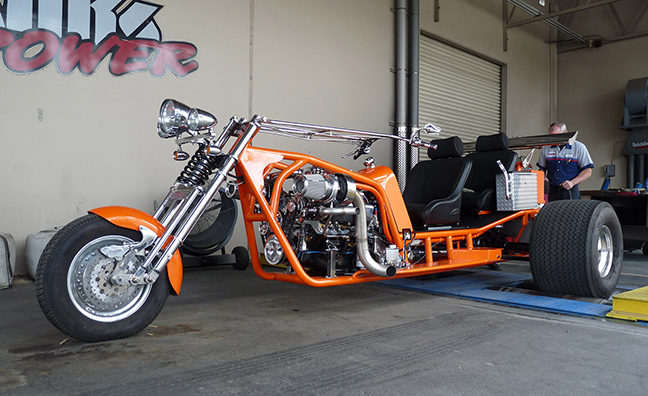 The last time we saw it, fresh off the dyno it was a fully-dressed engine, all wrapped up like a holiday gift and on its merry way across the desert to the place that they call “The city that never sleeps.” (aka Las Vegas, Nevada). Now LTV’s office manager Gabe Ginsberg and assembler David Den Hartog had trailered the beast back across the burning sands to Azusa for the Banks bunch to hone a razor’s edge on the Twin Turbo’s basic tune-up.

Back at Banks HQ in Azusa everyone marveled at just how very nicely the very photogenic 800 horsepower engine was fit into this wild, long wheelbase, bridge-girder-strong, tricycle chassis made from what seemed to be miles of 2-inch diameter, .120-wall, chrome-moly tubing (effectively the same stuff that they make protective roll-cages out of for top dragsters and stock cars).

Aptly named “The Widowmaker” this particular LVT model is considered the baddest of the bad and is very definitely, absolutely, unequivocally, flat-out, no kidding around, most assuredly (get a breath here) about as mean a ride as you can plunk your backside into this side of a NASA rocket sled. Our runs (power pulls) were all on the chassis dyno but the readouts showed big wheel slip at an indicated 200 miles an hour, a “pretty good” indication of the engine’s robust thrust potential. 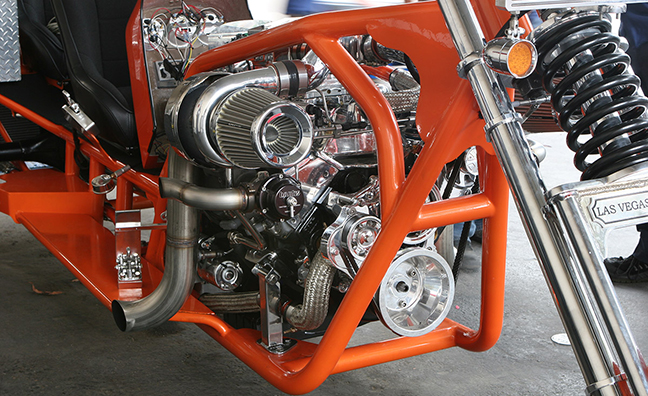 LEGAL JARGON: These (and any others quoted herein) numbers are strictly for comparison and in no way intended to indicate any promise of potential performance. (But this thing really, honestly, full-time, no time off for good behavior; picks them up and lays them down!)

There are two seats laid out in tandem here, meaning that proud owner of one of these bikes can take a friend with them (preferably an adventurous one, who will enjoy being pinned back in their deep, form-fitting, off-road racing seat leaving every stop sign and traffic light on the strip). Of course such back seat riders need not to be of the little-tap-on-the-shoulder “Ok, that’s fast enough.” variety. Nope, Widow Maker operators will need to be looking for co-pilots with an attitude that embraces adventure, and who really don’t mind being looked at ALL THE TIME. Short of gliding into town straddling a cruise missile, you will get gawking with this machine. (Like you hadn’t figured that out first look at the accompany photos!)

Even the color scheme on this monster motorcycle seemed appropriate: a foot-thick, bright metallic pumpkin coating that almost looked edible. But this no pumpkin coach, this was a modern interpretation of the kind of vehicle that a guy like the headless horseman would have, by now, traded his faithful nag in for. This 3-wheeled apparition just gave off those kind of vibes. Even when they weren’t spinning it up and beyond to that 200 miles-per-hour reading on the dyno … “I may be a friendly shade of orange, but I darned sure ain’t the great pumpkin, Charlie Brown.” the bike seemed to be saying under its breath. 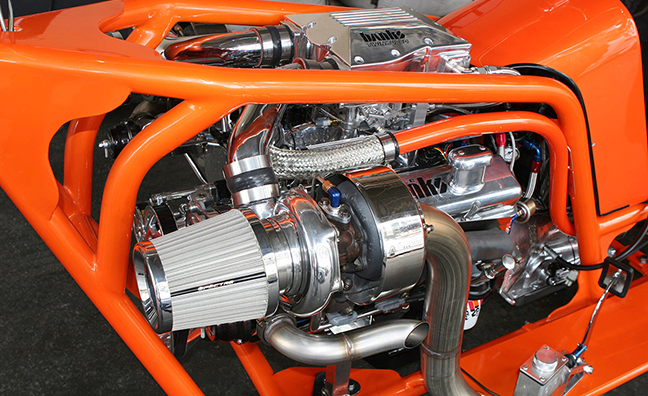 As the testing continued, the Banks engineers determined that the exhaust pipe that LVT had installed, exactly perfect for the shape of the machine, was a little too short for the oxygen sensor to get a clean reading, which, in turn made the computer “confused” (there’s a long technical term here but confused works just as well), which in turn, did not allow the engine to punch out its full potential of pony-power. A quick bit of electronic magic adjustment easily cured that and revealed the horsepower that was sort of “hid out” in this remarkable two-turbo wonder.

And, almost as quickly, the “fix” has added a few lines to the owner’s manual that comes with each Banks Twin Turbo engine! Written right on site

here at Banks, this owner’s manual (and every other manual for a Banks Power product, is a true living document. Instantly upgradeable (and available 24/7on the Banks website) these manuals are printed in small batches on premises and thus easily adjusted if new information is learned about the installation and/or operation of a particular Banks product.

It goes without saying (but we’ll say it anyway) that shrinking violets and “private people” need not apply for ownership of one of these technically-outrageous. Scientifically-preposterous, and totally-wonderful, tri-wheeled conveyances for which Banks produced the orbit-achieving power.

Fun … but not for everyone perhaps. 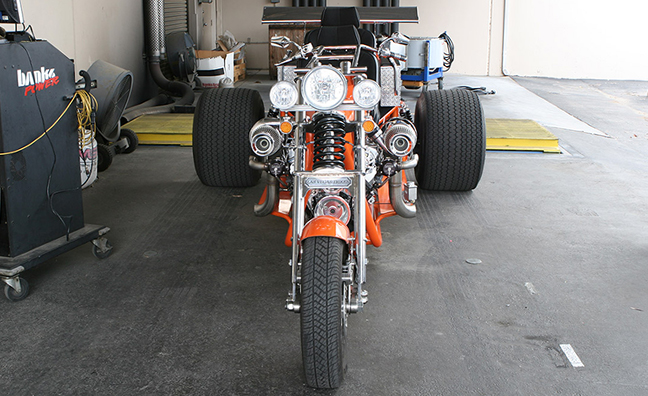 PROLOG: What follows was written a few months ago. At that point all we had seen of this project at Banks was the actual engine build itself and a few website shots of some of the bad-to-the-bone bikes that Las Vegas Trikes builds out there just across the Mojave desert from Azusa. When the real thing arrived at the shop (above) it was, to say the least, a unique experience. What follows is the build-up to that visit.

BANKS TWIN-TURBO TO TWIST IN TRIKE
As everyone who knows horsepower knows, Gale Banks Engineering – – Banks Power – – is the fabled home base of Twin-Turbo Sidewinder power.

Over the past decade, all over the country hundreds of Banks-built high-powered V-8 engines have plastered broad smiles on their owner’s faces powering a fair old variety of rides.

Truth be told, there’s really not much that really compares to the wind-up of two high-revving turbochargers lighting off 377 cubic inches of heavy Chevy horsepower. In the highly-competitive world of super performance these Banks-built beauties have earned a well-deserved reputation as pound for pound, dollar for dollar, the best and/or baddest (take your choice) small block that money can buy.

Every component in every Banks Twin-Turbo is special to the job, with every part specified, designed, fitted, or modified by the Gale Banks Engineering staff in house to exacting specifications. From the high strength Banks/Dart block, through the forged steel crankshaft, to the 4340 H-beam rods, and on to the gleaming Banks Sidewinder twin intake manifold, each part, every single component, of this engine has but one purpose: producing hundreds upon hundreds of big, strong, solid, horsepower and untold tons of pavement-peeling torque.

These precisely-built, one-at-a-time, hand-assembled engines are the living symbols of Banks’ quest to be the best. They’re seen by thousands almost every week in the hottest of hot rods at the coolest of show cars; many of the four-wheeled world’s most beautiful (and for sure fastest) machines. Banks Twin-Turbo power is a true badge of honor in any vehicle.

However, until a gentleman by the name of Garth Kloehn decided that he had to have one of these legendary powerplants in his personal machine, a Banks Twin Turbo engine had never found a home in a motorcycle, and not just any motorcycle, a three-wheeled one at that!

Kloehn is the founder and owner of Las Vegas Trikes. That company is known far and wide as THE place where some of the wildest, most strident trikes in the universe are born, raised, and then set free to roam the streets. A quick look at their website (www.lvtrikes.com) should give you the idea.

Truth is these machines are items of personal choice that are (understatement alert) “not for everyone”. These trihemoths (newly-coined word there) are “Mad Max” meets “It Came From Outer Space” with a couple of reels from “Transformers” spliced in just for good measure. They fall well beyond the realm of “instant conversation starters”. Short of saddling up a seven-foot-at-the-withers saber tooth cat and riding it sidesaddle down the strip, these are just about the most in-your-face way to promenade up any boulevard there is.

They are (and you’ve very likely already guessed it!) also very fast.

What are they really? A few feet of 4130 chromemoly tubing, three tires (one narrow one and two real broad suckers), a seat (maybe two), a set of handlebars, a fuel tank, a windshield, a couple of quarts of some super-exotic paint, some very neatly organized wiring, and little else. Overall weight: about that of a Fiat 500, overall horsepower in mister Kolehn’s Banks Twin Turbo-equipped trick trike: “just a click over 8 bills”. That’s eight hundred husky ponies, all chomping at the bit, all trained by that master of horsepower … Gale Banks and each of them only having to heft less than 3 pounds of vehicle! 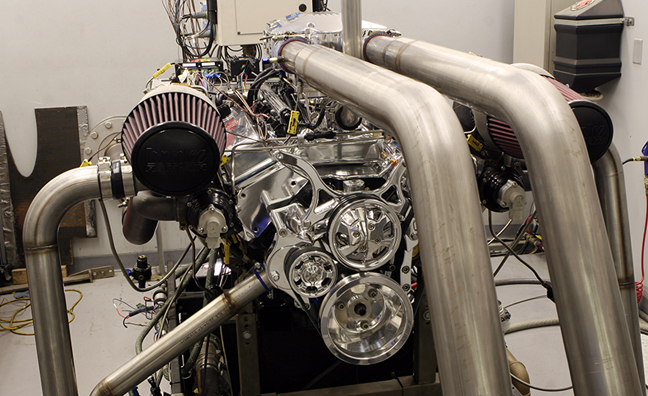 As the power unit appears in some of these photos it was just getting it’s first break-in miles on the Banks dyno cell. Final touches and a final (top secret) proprietary Banks tune were laid on and then the unit was very carefully loaded into its shipping case and readied to be dispatched to Las Vegas where who-knows-what-wonders of tri-wheeled chassis magic awaited.

We’ll try to follow along on this story. Kolehn has told us that once he gets his Banks Twin Turbo bolted into his machine he’s planning a road trip to the LA area to sort of give the package a little workout.

EPILOG 2: This one went back to Las Vegas and back into Mister Kolehn’s garage. Watch for this rolling piece of orange ordnance next time that you’re in town. And … Try not to look too surprised if it (or one of its kin) draws up next to you on the Strip … It’s Banks Twin Turbo-powered and (quite) ready to rumble!

WANT ONE FOR YOURSELF?: www.lvtrikes.com