Of course the design and engineering staff here at Banks Power is more than acutely aware of the above. It’s been one of the prime Banks company missions to improve overall diesel efficiency for more than 30 years now, and it falls to them to constantly work with the upgrading these systems. 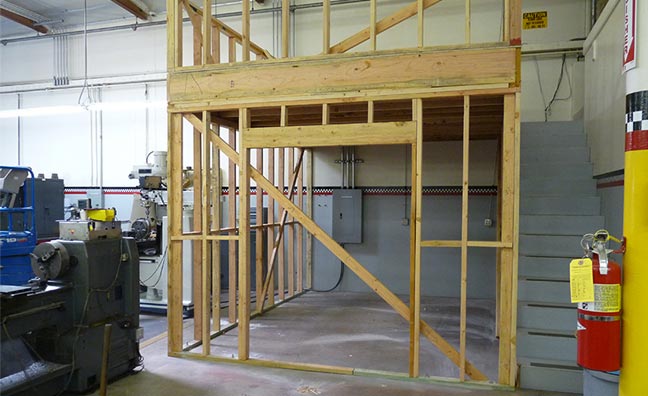 As with almost everything in life, “timing” is a critical component of success, and with diesel fuel systems it becomes hyper-critical.

It’s an open secret that diesel engines ignite the incoming fuel charge without the use of a spark plug and the attendant timing systems associated with spark ignition. The ultra-precise timing of the diesel fuel into the cylinder is the sole method of controlling combustion, which takes us back to the fuel injector and its actuation.

The electronic signal that tells the injector when to send the diesel and how much it should allocate is something which can be tailored precisely to the job at hand and that also can be made very adjustible for various applications. 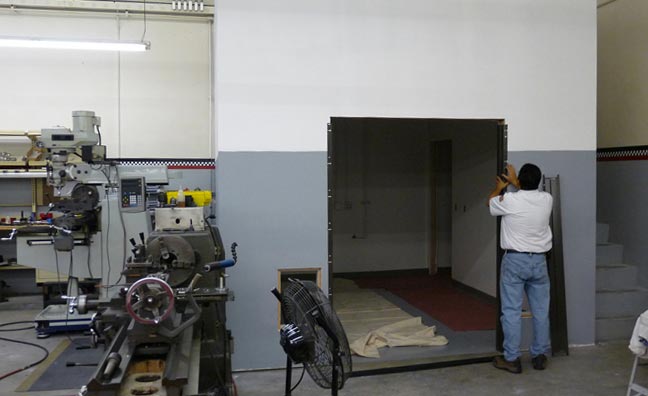 … Which brings us around to the subject of this piece, new shop space for an important new addition to the Banks testing arsenal:

Out on the Banks Advanced Concepts Engineering (“ACE”) shop floor there’s a brand new set-up on the way. A lot of heavy machinery has been moved and repositioned and space over on the West wall of the facility has been opened up.

And the reason for the work is that a little while ago new piece of special test equipment was delivered to the shop, and a completely separate work room will need to be designed and constructed for it to “live” and function within ACE shop area.

The equipment, a large 3-piece (mostly green) monster, turns out to be a highly sophisticated diesel injector test bench which happily gives us a reason for all of the above background about diesel fuel pressure etc. in the opening ‘graphs of this little story.

This ultra high tech piece of machinery will now allow Banks’ engineers and technicians to test and evaluate a wide range of diesel fuel injectors under full run, full pressure conditions on site with no waiting for parts to ship back an forth to an outside tech service.

Prior to this the only practical way that Banks technicians had to evaluate diesel fuel injection units was to run them on an operating engine in one of the Banks test cells.

In times past, when a set of precision-matched diesel injectors was desired, a fairly large quantity of units would be sent out to be flowed and the eight closest in specification would culled out and put to work.

As one might suspect, diesel injector tolerances are extremely close and the actual amount of fuel injected and lit off in one combustion cycle is actually quite small, which makes ultra-fast, ultra-precise metering of critical importance.

This new evaluation device will not only test diesel fuel injectors, it will also check out high pressure diesel fuel pumps as well, spinning them up to operating speeds where they’ll be moving a fair quantity of fuel into the common rails that distribute the fuel in these systems.

This test bench is designed to feed back exact operational information on each individual injector’s performance to the Banks engineers and engine builders under a complete range of speeds and loads. It will present them with a steady stream of real-time data which will be recorded and used down the line to fine tune and improve existing systems as well as aid in the design and production of even more effective future systems.

The reasons for the enclosed “building within the building” nature of this particular project is very much like the two Banks engine test cells. For one thing there’s noise isolation. Eight diesel injectors being run at engine speeds at line pressures in excess of 1,600 bar (24,000 pounds and better per square inch!) are going to make quite a bit of commotion “out in the open”.

Normally these electrically-actuated devices are buried deep inside the engine’s heavy, metallic cylinder heads, without that sound-attenuating environment eight Bosch injectors under power are expected to sing a rather strident song. Keeping that ruckus down to the proverbial “low roar” is just plain neighborly for the rest of the personnel on the shop floor (and beyond! this writer sits less than a hundred feet and one doorway from the new test room!)

A secondary need for the enclosed operational area is for cleanliness. Not to say that the Banks shop is ever “dirty”, in fact it’s one of the cleanest, tidiest race shops you’ll ever find. But, material is band-sawed, turned on lathes, machined and otherwise worked in this race shop and any amount airborne residue is just not the slightest bit compatible with the micrometer-close work of stress testing complicated electronic fuel injection components. 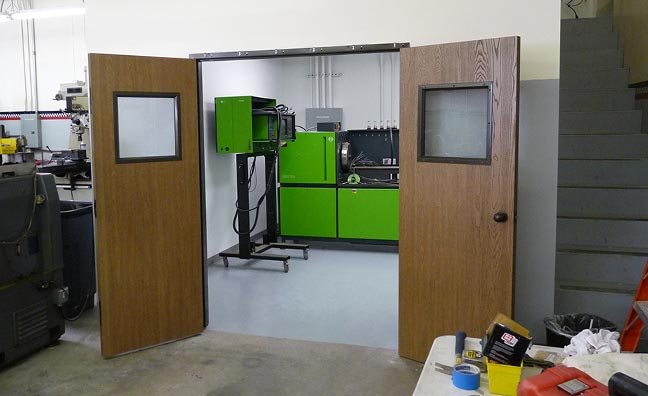 But test-bench and dyno work is only the very beginning of the process at Banks.

The company continues to use the whole range of real world testing “disciplines” as well. For example taking diesel fuel systems to their very limits while firmly attached to the engines of all manner of super-exotic vehicles in all-out assaults on racing records (of which they happen to own quite a few) in specialized “Sidewinder racing” vehicles like its speedy Dodge Dakota, whip quick S-10 Pickup and blindingly fast Top Diesel Dragster.

As good as this new test bench is, and as much technical help that it is going to be for the Banks team, everyone here knows that the final proof of any concept. At Banks its out on the road and racetrack.

Theory is the beginning of every project, professional engineering is what Banks does, and super-accurate bench testing of every part, every design gives us proof of concept … But putting the power to the pavement is still our final answer.

Drop back by soon, hopefully we’ll be adding a shot or two of this unit in action in a few weeks.