Thanks to the diesel aftermarket, many aspects of our trucks can be improved tenfold to help us tow easier. We can simply plug in a programmer, bolt on an air intake, and install an exhaust system-which all improve acceleration performance. But what about the other side of the coin: braking?

While most companies are concerned only with getting your load up and moving quicker, Gale Banks Engineering is on both sides of the fence. Its latest development, the SpeedBrake, is the most technologically advanced exhaust braking system in the aftermarket today. It was designed to allow your LLY, LBZ, or LMM Duramax (‘04-1/2 to current) to manage the load you’ve got in tow with the utmost safety in mind.

EXHAUST BRAKES OF THE PAST

Traditional exhaust brakes featured butterfly valves in the exhaust system that would block or restrict exhaust flow in order to slow a truck and trailer down. Peter Treydte, Banks’ engineering test group manager, told us that the problem with this is it applies a lot of pressure on the top of the engine’s pistons during the exhaust stroke, which has a chain reaction effect, where even the crankshaft is slowed (creating more of an engine-braking scenario than exhaust braking). Furthermore, conventional exhaust brakes required labor-intensive installs, which consisted of cutting and welding on the exhaust system followed by wiring.

The SpeedBrake, on the other hand, installs easily with a few simple connections under the hood, has an extensive electronic management system, and comes with a PowerPDA for monitoring all of your trucks braking and operating functions. (See note regarding the PowerPDA at the end of this article.) 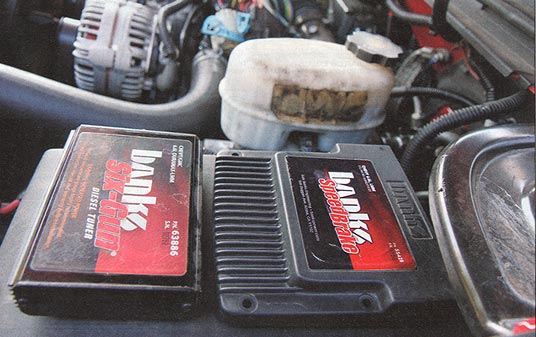 Not only is the SpeedBrake the most advanced exhaust brake on the market, it’s also the easiest to install. According to Banks, a novice mechanic with basic handtools and the supplied installation manual can install the unit in less than four hours.

According to Banks, the SpeedBrake is all about taking the current technology available on the market and capitalizing on it. For example, while the main intention behind variable geometry turbo technology was to increase acceleration performance (by varying the volume of the exhaust housing and making the turbo act like a smaller unit for quicker spooling), Banks realized that varying drive pressure on the turbine wheel could also be used to create backpressure, thus slowing down a vehicle. Along with using the VGT to aid in stopping, the SpeedBrake controller allows the Allison transmission to downshift more aggressively than stock and also controls torque converter lockup.

Three basic modes are available on the SpeedBrake. In the Off mode the unit provides no help, and your only method of stopping is by applying the brake pedal and allowing the Allison to downshift in its factory Tow/Haul setting.

In the On mode, three brake settings are available: high strength for heavy loads, medium strength for intermediate loads, and low strength for little-to-no load behind the truck. The SpeedBrake can be set up to activate any time the foot brake pedal is applied.

The last operating mode is called Speed Control, where you can set a target speed for hill-descent situations. Target speed can be adjusted incrementally between 25 to 75 mph, and three pre-set options can be used or customized to each driver’s specific needs. 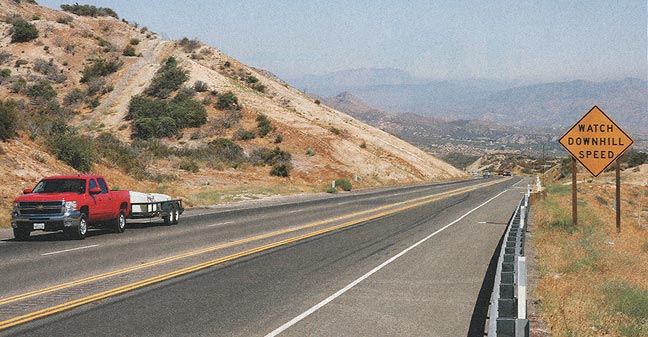 This a photo we snapped while on our way back to the top of our 6 percent grade. In our testing of the SpeedBrake, we hardly needed to pay any attention to the speed warning signs along the highway. In fact, our last test in On mode slowed the truck and trailer from 55 mph to 15 mph within one mile. If you find yourself going too slow, the accelerator will override the SpeedBrake and stop it from creating backpressure and downshifting.

To experience the power of the SpeedBrake firsthand, Banks’ engineers put us in the driver’s seat of its LMM-powered Chevy 2500HD with 10,000 pounds worth of water, sand, and trailer in tow. Our testing began along a 2-mile stretch of Highway 138 in Southern California, which happened to have more than a 6 percent grade.

First, with the factory Tow/Haul mode selected and the SpeedBrake off, we reached the top of the pass and began our descent at approximately 55 mph. It didn’t take long to realize we had a 10,000-pound trailer pushing us down the hill as we reached 65 mph just a quarter-mile into the mile-long run. Once at 65 mph, we were instructed to apply the foot brake, which, in conjunction with factory Tow/ Haul parameters, prompted the Allison to downshift to Third gear, where it remained until the end of our first trip down the pass.

Our second descent test was performed using the Speed Control mode on the SpeedBrake. We selected a target speed of 50 mph and headed back to the top of the pass. We crested the hill at 60mph and let off the accelerator, effectively allowing the SpeedBrake to control our descent and achieve the desired 50-mph speed. The PowerPDA immediately displayed that braking power was being applied at 100 percent (allowing the variable geometry turbo to create maximum backpressure) until our downhill speed slowed to 50 mph. At that point the percentage of braking power being applied began to fluctuate (once the desired speed is achieved, the vanes in the turbo begin to vary their position to maintain that speed). Once we reached the bottom of the pass, we performed two more Speed Control tests with target speeds of 45 mph and 35 mph. The SpeedBrake performed flawlessly. 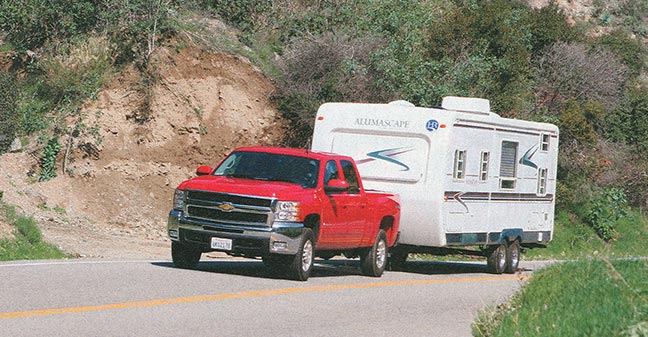 It should also be noted that the SpeedBrake is a completely fail-safe modification-it is said not to put any added strain on the variable geometry turbo. When the transmission is downshifting, the turbo vanes are even opened momentarily to not only prevent potentially harmful pressure spikes, but to keep brake operation smooth at the same time.

Following the same test procedure in On mode with the brake strength set on high, the braking power remained at 100 percent throughout the duration of our descent. In addition, aggressive yet smooth down- shifts in the Allison (which downshifted into first gear once our speed neared 25 mph) effectively dragged us down from 55 mph (at the top of the hill) to 15 mph within one mile. Then, once the truck and trailer reached 15 mph, the SpeedBrake disengaged, allowed our speed to increase to approximately 18 mph, and then reapplied, effectively keeping us in a 15- to 18-mph range. We had to accelerate to reach the bottom of the pass.

Once our initial testing concluded, the Banks crew showed us another option available when the Speed Control mode is selected. By enabling a Foot Brake Activation feature, once you apply the foot brake pedal, the SpeedBrake switches to a maximum braking mode. This is ideal for interstate offramps, which the Banks guys displayed for us several times.

The SpeedBrake caters to all drivers because it’s adaptable to anyone’s driving style. You’re not stuck with target-speed descent or 100 percent braking power all day long-you can choose. And not only that, you can customize the SpeedBrake’s settings courtesy of a PowerPDA while driving down the highway, or even increase your ideal braking speed or power in the midst of a downhill grade.

The advantage of owning a SpeedBrake won’t be exclusive to LBZ, LLY and LMM Duramax owners for long. Banks is hard at work to release units for each of the Big Three’s VGT-equipped diesel mills. In the near future, 6.0L and 6.4L Power Stroke applications will be available, followed by a SpeedBrake for the 6.7L Cummins, which Banks is claiming will be a big improvement over the OEM exhaust brake that comes standard on Dodges.