Diesel technology has continued to evolve. Gone are the days of mechanical injection, and now a computer controls the cycles of high-pressure injectors down to the millisecond. Horsepower, torque and mileage numbers are up, while emissions emitted from the tailpipe and engine noise are down. It’s a brave new world from the days of IDI. With the engine improvements comes a new breed of aftermarket parts designed to take full advantage of the latest diesel powerplants.

Take, for example, exhaust brakes, which were designed to save brakes and make towing safer and easier. In the past, the installation included cutting and welding a flap apparatus into place. Getting all the plumbing and hardware set up was a solid day job for a professional, and could take the better portion of a weekend for the novice. If you own a 2004.5-to- 2009 Duramax pickup, though, you could get all of the benefits of an exhaust brake and then some without having to break out the welder.  Actually, all you really need are basic hand tools.

The new SpeedBrake from Gale Banks Engineering is the latest in all-electronic exhaust brakes, with plug-and-play connections for a clean and simple installation, and no cutting or tapping required. It’s a feature-packed brake different from other exhaust brakes on the market. Not only does it increase the stopping power and extend the service life of brakes, its adjustable, maintenance-free and also capable of reading and cleaning the computer of codes.

Utilizing the factory VGT turbocharger on the Duramax, the SpeedBrake captures control of the varying vane position. Instead of closing a flap like traditional exhaust brakes, the SpeedBrake closes the vanes on the turbocharger to create backpressure. The SpeedBrake also takes charge of torque converter lockup and transmission gear selection to aid in the deceleration process. Meanwhile, the PowerPDA gives the driver feedback on important engine parameters and user-set on-screen alerts. (Please see note about the PowerPDA at the end of this article.) 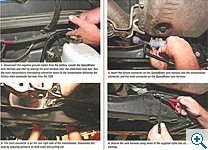 We followed the install of the SpeedBrake into an ‘08 Chevy 25OOHD back at the Banks headquarters in Azusa, Calif. In less than 90 minutes, the truck was on the road with the SpeedBrake up and running. It was a painless process that produced some serious results when the truck was loaded with more than 10,000 pounds-worth of trailer and taken for a test-drive, all with barely getting the installer’s hands dirty.

While we have the scientific results in the sidebar (see below), we carried our own impressions of the SpeedBrake separate from strictly numbers. The thing that impressed us most about the SpeedBrake was the Speed Control feature. Think of speed control as cruise control of sorts, but instead of controlling acceleration, it controls deceleration.

Coming down Southern California’s Cajon Pass fully loaded and with the Speed Control set at 55, the SpeedBrake took advantage of the VGT turbo, closing the vanes at just the right amount needed to maintain the preset speed. It was as quiet as it was smooth, while the speedometer didn’t deviate from our desired cruising speed. Its smoothness is what really impressed us. Even on steep sections of the pass, the transmission didn’t have to downshift once the initial set speed was obtained.

The other shining point was the adjustability of the SpeedBrake from the PowerPDA. With the touch of a screen, the aggressiveness of the braking could be changed to low, medium or high. The high mode is slam-you-forward hard, as the transmission downshifts in a hurry to bring you to a quick halt. Under fairly light loads, it was almost too much. But throw some serious weight behind the truck, and the aggressiveness was welcomed when it came time to bringing the truck to a stop.

Along with the level settings, the other thing that stands out was the adjustability on how the SpeedBrake was activated. You have the option to allow the SpeedBrake to control itself and act like a traditional exhaust brake where it engages on deceleration, or you could activate it through the brake pedal.

The SpeedBrake is electronic and basically knows everything going on in the factory computer relevant to its operation. When you activate it through the brake pedal, you can push the pedal slightly and the SpeedBrake does its thing, creating backpressure and downshifting while enabling the truck to stop. We liked it enough that when the truck is empty, the SpeedBrake is set to activate via the pedal on medium strength, saving some wear on the brake pads in the process.

Overall, we think Banks Engineering has hit a homerun with the SpeedBrake. It’s a snap to install, is extremely effective and the adjustability allows the driver to tailor it to his or her preference.  If you’re in the market for an exhaust brake for your 2004.5-to-2009 Chevrolet or GMC, it’s definitely worth consideration.