A Hard Look at 7.3L Diesel Performance with Banks Engineering

There are relatively few absolutes in life — death and taxes being the obvious front-runners; the others that we occasionally hear about don’t always pass muster. In the last few years of automotive design progress, the obscene pulling power of today’s diesel engines has become a routine exercise in relatively clean, capable load-hauling torque. Able to achieve higher efficiency with today’s automatic transmissions, a diesel-powered pickup has been a no-brainer buying decision for folks looking for maximum towing power and fuel economy. But even with all the hoopla surrounding the factory engine offerings, there has been a smattering of companies willing to invest the time and dollars necessary to develop parts to boost not only the power of these great engines, but also the fuel economy and, yes, the braking efficiency of the trucks themselves. Banks Engineering is a front-runner in this category and has the numbers to prove it.

While talking about dyno figures is well and good, we thought that getting down to the nitty-gritty and examining these high–performance parts and how they work would be a more worthwhile endeavor. A diesel engine works quite differently from a gasoline engine. First off, there are several visual differences between today’s diesels and gasoline engines. For starters, a diesel engine does not have spark plugs to ignite the air/fuel mixture within the cylinder. A diesel engine also lacks a carburetor and port fuel injection.

A diesel engine is designed with higher compression and higher efficiency in mind than a gasoline engine, sometimes with a compression ratio as high as 25:I. How can this be? The reason why a diesel engine maintains such a high compression ratio is because it relies on detonation to ignite the air/fuel mixture the cylinder. On the intake stroke of the engine, the intake valve opens, only allowing air into the cylinder, instead of the normal air/fuel mixture gasoline engines intake. As the piston travels upward during the compression stroke and compresses the air, the temperature within the cylinder rises, and before the piston reaches TDC, a fuel injector injects fuel only, which is instantly ignited by the extreme temperature inside the cylinder.

All the functions in a modern engine are controlled by the ECM communicating with an elaborate set of sensors, measuring everything from rpm to engine coolant and oil temperature, and even engine position (i.e. TDC). Glow plugs are rarely used today on larger engines. The ECM senses ambient air temperature and retards the timing of the engine in cold weather so the injector sprays the fuel at a later time. The air in the cylinder is more compressed, creating more heat, which aids in starting. Now that we know how a diesel engine works in the most basic of terms, let’s take a look at what Banks Engineering has up its sleeve to power up an already powerful engine such as Ford’s 7.3 L turbodiesel.

The 7.3L Power Stroke engine debuted in the ’99 Ford Super Duty line of trucks and was a welcome addition to the Ford family. This engine featured a redesigned turbo housing with a wastegate, an intercooler, and a constant-diameter turbine outlet pipe. As good as this engine is, the newer and smaller displacement 6.0L diesel engine, which debuted in 2003, makes more power. Banks saw room for improvement on the older engine and designed the right parts to make up the difference in power — and then some.

Ford redesigned the factory turbo compressor wheel within the turbocharger to be quieter and, in turn, hurt the performance of the engine. The new wheel received shorter blades, which promoted the oscillation of air with in the housing. This oscillation did make the turbo quiet, but it also induced compressor surge and superheated the air, which reduced the turbo’s efficiency and performance.

Banks Engineering’s solution to this was to create a compressor wheel that features staggered, angle-cut blades. The new design makes the turbo louder than a stock unit, but it also provides more boost and as a result, more horsepower and torque. We like our engines loud, so this is actually a good thing. 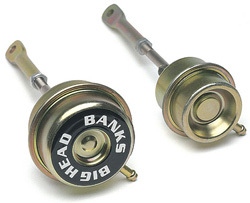 The Wastegate
The wastegate’s job is to release excess boost pressure at a predetermined level. The factory wastegate is crippled with an actuator that has a weak internal spring. The spring lets the actuator open the wastegate prematurely, allowing boost pressure to drop where it matters most in the midrange rpm level, where the truck works its hardest to tow a load.

Banks Engineering designed a completely new actuator, called the BigHead Wastegate Actuator, to remedy this problem. The BigHead holds the wastegate closed longer than the stock actuator, allowing the turbo to spool up quickly and maintain peak boost levels throughout the rpm band for better-than-stock acceleration and midrange towing power. 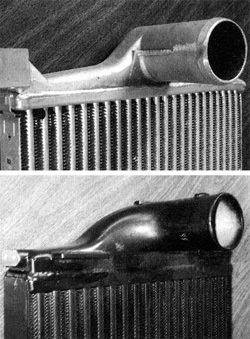 The boost of air that leaves the turbocharger outlet pipe is hot — really hot. We all know that a hot intake charge is less dense than a cold intake charge and that the more dense air we can pack in to the engine, the more fuel the engine can burn, and the more power it will make, right? Well then, if we want our diesel engine to make more power, we need to cool the air coming from the turbocharger to the engine. This is the job of the intercooler, a part that looks similar to the radiator on your truck.

The factory air-to-air intercooler on a 7.3L Power Stroke engine has a few shortcomings that Banks has overcome with its own Techni-Cooler intercooler. The stock intercooler has a narrow, restrictive inlet tube that forces the incoming air charge across the center tubes of the intercooler. This wastes a large portion of the side tubes because very little air charge is running through the tube. Bank’s Techni-Cooler intercooler features a wider inlet tube with a less restrictive angle to the tube, which helps promote even distribution of the incoming air across the entire intercooler. This increases airflow as much as 18 percent and promotes more effective cooling of the air. Cooler air equals more power, right?

The upgrades to the wastegate, the turbo, and the intercooler are enough to achieve maximum boost to the intake manifold, but that doesn’t mean much if the engine can’t use and exhaust the extra incoming air. There are some other upgrades that can be made to the engine that are just as important. 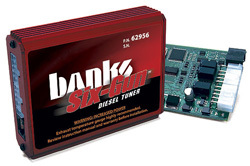 The Computer
A computer chip upgrade sounds good, as long as you’ve increased the airflow to the engine to go along with all the extra fuel that the new chip has the injection system dumping into the cylinders. Have you ever wondered why some diesel-powered trucks spew more black smoke than others? Part of the reason for this is that dumping more fuel into the engine helps it make more power. Yet if the extra fuel is not accompanied by extra air, you’ll see black smoke coming from the tailpipe. Remember that diesel fuel is mostly composed of oil; the smoke is a byproduct of burning this type of fuel. Another downside to only increasing the fuel consumption of the engine is increased exhaust gas temperatures, or EGTs. Extreme EGTs are a clear sign of a diesel headed to the scrapyard, or to your local mechanic. An aftermarket computer chip can increase the fuel delivery to the engine, but cannot increase the airflow.

The Exhaust
Fords turbine outlet pipe is an undersized part that places a warm-up choke valve directly behind the turbocharger. The placement value is highly restrictive and increases exhaust backpressure, and of course, hurts engine performance. Banks created the Power Elbow®, a cast-iron turbine outlet pipe, to replace the warm-up choke valve with a conical diffuser that stabilizes exhaust gas pulses and streamlines wastegate air flow. The Power Elbow’s unrestrictive design reduces exhaust back pressure and allows the turbo to spool up quickly, improving the truck’s acceleration.

The Brakes
Under normal circumstance, your truck’s brakes work just fine. But we all know that there are many instances when your truck might be overloaded, or you encounter an unfamiliar steep downgrade that requires more braking power than the factory disc brakes offer. Relying on just the stock braking systems to slow your truck on a steep downgrade often leads to premature brake failure due to overheating the braking system. The brake fluid boils under the stress, filling the brake lines with air bubbles that can render the brakes useless. Then what do you do?

Banks’ Brake is formed around a unique design that provides maximum braking power without restricting the exhaust flow under acceleration and robbing the engine of power. The Banks Brakes is positioned further down the exhaust system than other aftermarket exhaust brakes, which are often bolted directly to the turbine outlet. The exhaust pulses coming out of the turbine outlet spiral directly into the butterfly valve of the exhaust brake, creating an extremely restrictive obstruction in the exhaust system. By placing the brake away from the turbine outlet, Banks avoids this common pitfall, creating instead a powerful braking component that doesn’t affect engine power. The Banks Brake is attached to a large-bore casting with a conical shape that streamlines the exhaust system pulses and can actually increase horsepower under acceleration. The pneumatic brake is operated by 4-inch vacuum actuator and a computer controller. The Banks Brake is easily turned on and off by the driver via a dashboard-mounted switch. 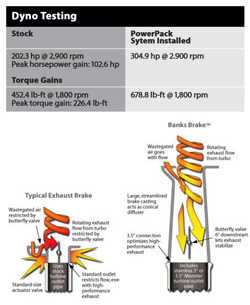 WHAT DOES IT ALL MEAN?

By now you’ve become familiar with the shortcomings of Ford’s factory parts and the benefits of Banks Engineering’s offerings. We’d be remiss if we didn’t offer some cold hard facts to back up all this theory talk, so we’ve going to include some dyno figures taken from an ’02 Ford F-250 Super Duty truck that received the complete PowerPackage of upgrades from Banks for its 7.3L Power Stroke diesel engine. We drove the truck before and after the upgrades and can honestly say that even without seeing the dyno numbers, we felt an instantaneous and overwhelming improvement. After the upgrades, this truck kicked us right into the seat under hard acceleration, a testament to Banks’ genius at building huge amounts of trailer-towing torque. The exhaust brake was also a welcome addition to this truck since it sees thousands of towing miles each year, and it will most certainly save wear and tear on the primary braking system while increasing safety. The dyno numbers only reinforced what we already knew. The Banks parts worked and our test mule was more powerful than ever.