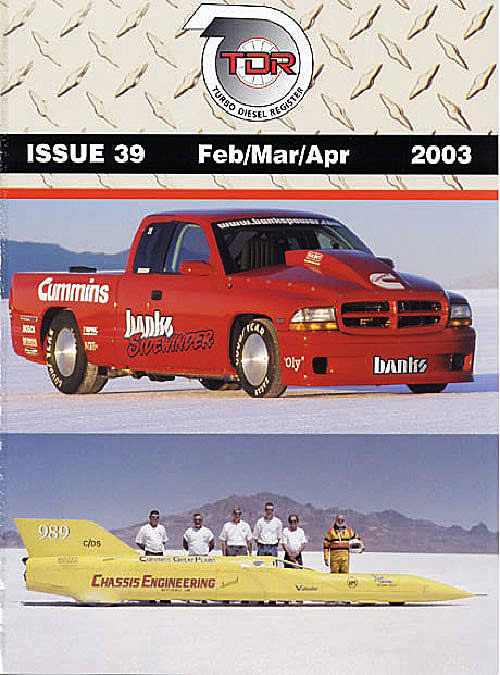 Project Sidewinder’s goal is to break the Land Speed Record for any pickup, any class, gas or diesel…

En_gi_neer_ing \ “en-je-‘nir-ing\ n: the practical use of science in industry, building and manufacturing.

Driving out and onto the Bonneville Salt Flats one imagines suddenly being placed on a polar ice cap. The landscape is white like frozen snow, with a crunch underfoot to match. Off in the distance the mountains rise above the valley floor. However, you hear the rumble of a highly modified blown and injected V8 engine come to life warming up for its next run and you realize you are in a location like no other on Earth. The allure of Bonneville raises the primal instincts in most, and becomes an addiction for others.

Racing for a land speed record is often a game of “hurry up and wait” not easily endured. The weather was more than kind for this year’s October event. In August, the heat draws the very life from your lungs, but come fall season (with the rains permitting) and the cool still air that racers love most can prevail. So it was to be for the 2003 World of Speed.

The Banks team arrived Thursday, and in keeping with the traditional Clessie Cummins promotional spirit, a highly modified Dodge Dakota truck with a Cummins HPCR 5.9 liter engine drove in under its own power pulling its support trailer. However, this was no ordinary Dakota, and certainly no ordinary HPCR engine. Mr. Cummins would have been proud. It takes more than a little engineering to obtain over 700 dyno-proven horsepower from a 5.9 liter diesel engine, even if your name is Gale Banks. Based on the popular B-series High Output format, the race engine incorporates many new technologies, including a Holset variable geometry (VG) turbocharger to provide over 50 lbs. of boost and cooling, the same with a cold water circulating heat exchanger. You’ve got to run and tune the beast and there aren’t any factory computers available. “No problem, we developed our own,” says Banks Engineering’s Gale Banks, whose custom software packages are sold under the trade name “OttoMind”.

And develop he did. Even the factory representatives from both Cummins and Holset were taken back with the results obtained by the team at Banks Engineering. But the engine is just half of the story. The Dodge Dakota, which appears stock and is in fact street legal (currently registered in California), contains one of the finest examples of custom chassis work displayed at the Salt Flats this year. Hats-off to Sheldon Tackett, chassis fabricator and crew chief. This truck (project named Sidewinder) has it all: a four-link, quick-change rear end; tubular “A” arms with adjustable coil-over shocks; and power rack-and-pinion steering. And if the front and rear 13” six-piston Wildwood brakes need a little assistance slowing the Sidewinder, just pull the parachute.

The truck is a model of engineering excellence. The truck was developed not only for the land speed record attempt, but also to compete in future street, drag and road course events. The team at Banks also did an exact job of documenting the components and sub-systems that went into the Sidewinder project. As an example the following is from the Banks website (www.bankspower.com) and discusses turbocharger control electronics.

Optimum boost and turbocharger shaft speed are crucial for peak performance and throttle response. The variable geometry technology of the Holset HY55 turbocharger now allows these parameters to be controlled. Since the turbocharger is capable of such sudden changes in shaft speed, only electronic control offers the quick response time necessary to vary the turbine inlet geometry to maintain peak boost without encountering a dangerous turbocharger overspeed condition, which could result in a failure. The Banks VGT controller automatically controls the variable geometry of the turbocharger for optimum boost pressure and turbo shaft speed according to varying input from the driver, engine and road conditions. The Holset VGT technology, along with this controller, allows torque curve shaping not even imagined in the past.

The above text and pictures were sourced at Bank’s website. The Turbocharger Control Electronics is just one of 25+ articles that detail each subsystem of project Sidewinder. Log on to www.bankspower.com and you’ll begin to understand the engineering prowess behind this vehicle. At the site you’ll find detailed information on the engine (base Cummins engine, intercooler, intake manifold, cylinder head, exhaust manifold, turbo, oil system, cooling system); transmission and clutch; safety and roll cage; brakes chassis and suspension; interior and creature comforts; wheels and tires; differential; and, last but not least, the Dodge Dakota and the many struggles to fit and fabricate around the truck’s smaller dimensions. The team did a tremendous job engineering this vehicle! Now, back to their land speed record story.

After their arrival the balance of Thursday was spent with tech/safety inspections (which presented no problems), driver certification and general preparation to launch Banks’ record attempts.

The goal was for the Sidewinder to become not only the world’s fastest diesel pickup (class: C/DT), surpassing the existing record of 159.647 mph, but also to set the Land Speed Record for the worlds fastest pickup, gas or diesel, regardless of class. That would require a two-way average over 205 MPH. In 1990, Banks earned recognition with the Banks/GMC Syclone non-turbocharged V-6 as the first pickup to exceed 200 MPH and as the world’s fastest pickup with a flying mile speed of 210.069 MPH in IMSA speed trials, followed by runs at Bonneville, so this was familiar territory.

The following morning, October 18, 2002, the Sidewinder, piloted by Don Alexander, made its first run (just to get the feel) and turned in the best one-way time of the day at 195.788 mph. Not too shabby for just “easing into it” as Don put it. The well prepared team, quickly serviced the bright “oh please give me a ticket” red truck, and followed with a return run that qualified the truck and Don for a new FIA world record of 182.613 mph and Bonneville track record for the same class (C/DT) as well. The efforts were quiet and smokeless. Sounding much like an Allison powered P 51 mustang as heard from a distance, this truck now had the attention of all who were in attendance.

With records verified, certified, and in hand, the Banks team set about making the necessary changes to the vehicle to raise the ante to the 200 mph mark. By quickly analyzing the data contained in the truck’s data logger, the decision was made to change some of the computer’s programming, change the injector size, and change the final gear ratio to 1.93 to 1. Interestingly enough, most of the 200 mph and faster vehicles competing at Bonneville require a push at the starting line because the final gearing is so high that the engines generally do not produce enough torque to get underway under their own power. Not so for Sidewinder. With over 1,200 ft. lb. of torque on hand running though a NV 5600 six-speed transmission, it leaves the line smokeless and under its own power.

The team lined up on the east end of the track on Saturday morning, October 19, to make yet another FIA run, this time to break the 200 mph barrier. With the track cleared, the heat exchanger full of ice, and the starter’s final check to make sure Don was properly secure, the Cummins powered Sidewinder quietly, yet authoritatively, sailed down the track at 216.034 mph. The return run, which appeared just as effortless, was clocked at 218.539 combined for an average of 217.314 mph, breaking the previous FIA record they had set just the day before! Don Alexander, now with just four Bonneville runs in his racing career of 30 years, had become a life member of the Bonneville 200 mph club, an honor that many pursue their entire racing lives.

But the team from Banks wasn’t finished just yet. The same afternoon, during an effort to capture a BNI record for the world’s fastest pickup (diesel or gas), the 5.9 Cummins diesel cranked a 217.212 mph (unofficial top speed 222.139), to be backed up with a run the next day of 209.954. The resulting average speed record was 213.583. It is interesting to note that the “slow” 209.954 mph run through the speed traps was done while coasting. Part way through the run the pinion gear had twisted off.

The Sidewinder had successfully completed numerous runs at the Salt Flats and earned records for the BNI Class C/DT at 217.314 and BNI Class “Any Pickup” at 213.583. Ask anyone in attendance at Bonneville and they’ll tell you that it takes years and years of preparation, often frustration, and re-attempts to accomplish a single class record. The Banks group and project Sidewinder were able to accomplish their goals in their first attempt. Congratulations to the Banks Sidewinder team.

Engineering: the practical use of science in industry, building, and manufacturing! We’ll look for more examples of Banks’ enginnering prowess in future land speed records and competitive events where the Sidewinder competes. 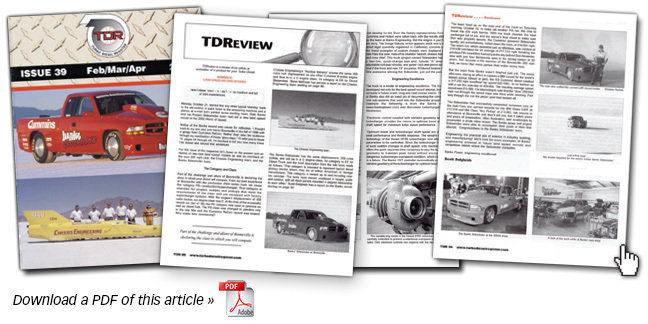