There are many aftermarket performance products that claim they can squeeze more power and fuel economy from you full-size Ford truck. No aftermarket manufacturer however, has the history of performance capabilities for these trucks as Gale Banks Engineering. In fact, their latest venture was a diesel truck that broke the land speed record, at 220 mph. Despite the power and speed built into the truck, it averages 21.2 miles per gallon on the highway.

As a result of Bank’s popularity in the performance diesel market, not many people know that the company has several kits for many of the prominent gas engine vehicles, including Fords 6.8L V-10 and its smaller brother, the popular 5.4L V8. Their PowerPack system for the V-10 is a complete system that uses a high-flow intake, header and exhaust that is tuned to improve the V-10’s efficiency and power. When used in conjunction with their OttoMind engine calibration module and the TransCommand option kit Banks claims the power increases are dramatic.

Our installation also included the Banks OttoMind computer module that
dials in the engine’s fuel and timing curves to take advantage of their exhaust.

Through extensive testing, Banks claims the stainless-steel PowerPack adds gains of 56+hp, 67 lbs.-ft of torque, and seven percent more miles to the tank, if you find that you have the willpower to keep your foot out of the accelerator. A pair of stainless steel TorqueTube headers and a seamless Y-collector pipe allows the massive 6.8L to breathe easy while the optional OttoMind engine-calibration module keeps a close check on air-to-fuel ratios, for safe exhaust temperatures and engine longevity. 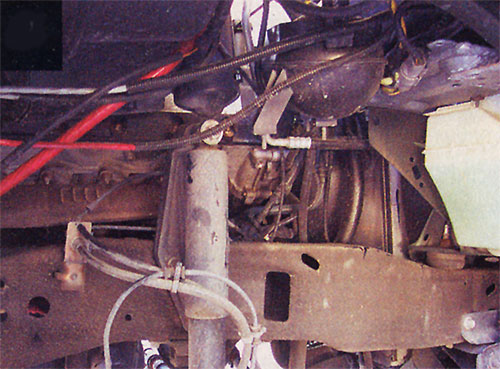 The first part of the installation involves unbolting the front inner fender wells and removing them from the vehicle. In addition to the fender bolts, there are several electrical connections on the left fender well and a vacuum reservoir attached to inside of the right fender well.

The TransCommand module is an automatic transmission, computer management system that is able to deliver power and functionality as no other chip upgrade can. The Ford E40D and 4R100 transmission have soft, car-like shift characteristics from the factory. Many truck owners prefer firmer shifts, especially when hauling large loads. The Gale Banks TransCommand is able to sense vehicle load, through rpm changes, throttle position and gear position to increase transmission fluid pressure in proportion to increased load. When under a heavy-load or full-throttle, the TransCommand makes quick, solid shifts. When the truck is under normal driving conditions, shifts are firm and smooth. Furthermore, slow shifts and excessive clutch slippage is eliminated, extending transmission life. 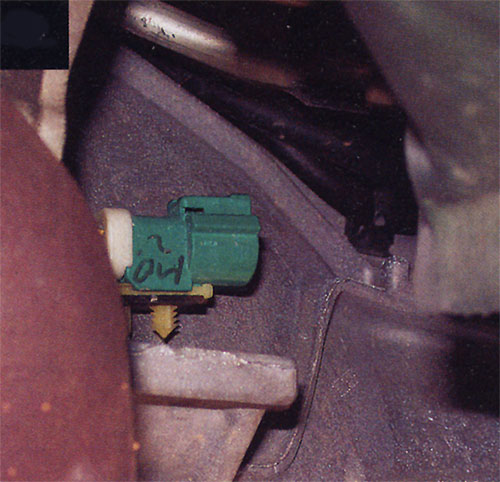 Locate both oxygen sensors on each side of the factory exhaust manifold headpipe. Unplug and remove the sensors from the headpipe, ensuring to mark each sensor for correct reinstallation.

As further testament to their PowerPack design, Banks offered to demonstrate the system on our own F-250 Super Duty. Banks sent us a complete PowerPack system with the OttoMind Calibration Module, and a TransCommand Kit to Rick Larsson of Team Street Sport for the installation and testing. The first thing we did was run the truck in its current configuration on the dyno. Our initial run in the stock configuration rendered numbers of 192.7 hp and 270.7 lbs.-ft of torque at the rear wheels. Afterwards, we documented the installation procedure and found that although time consuming, the kit was simple to install. Keep in mind that the installation requires removing the complete exhaust system from the manifolds to be tailpipe. 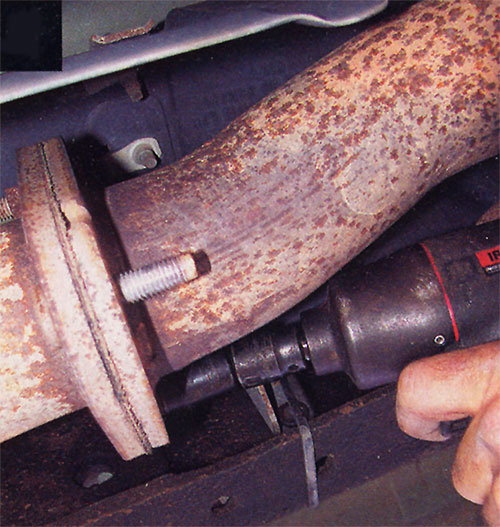 Disconnect the three-bolt flange at the front of the
catalytic converter from the factory y-pipe assembly.

Once the installation was completed, we ran the truck for 500 miles to allow the Banks OttoMind Computer Module to fully calibrate itself to our engine. Afterward we took the truck back to the dyno to get the results. The installation of the PowerPack with the OttoMind and TransCommand kit, yielded 255.5 hp and 351.4 lbs.-ft. of torque at the rear wheels of our Super Duty. This was 33 percent more horsepower and a 30 percent increase in torque over the stock configuration. As an added bonus to the overwhelming power this truck now has, we were also achieving 12.3 miles per gallon over the previous average of 10.9 MPG prior to the install. Clearly, the seven percent improved fuel economy claims by Banks is well on the conservative side. 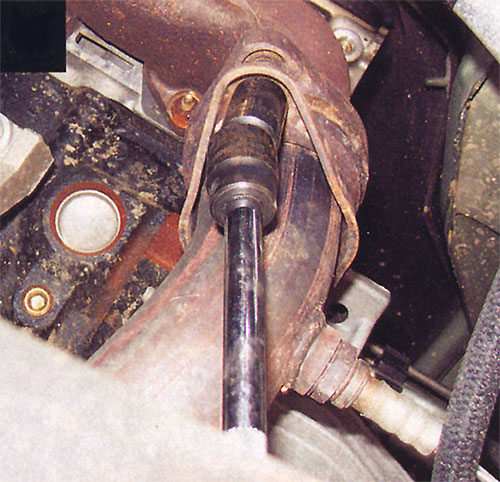 Disconnect the headpipes from the factory exhaust
manifold and remove the restrictive factory y-pipe.

What is the cost of all this power? The Banks PowerPack system alone retails for $1,643. the PowerPack with the OttoMind computer module retails for $2,050. The TransCommand transmission module retails for $267. As tested, the system installed on our Super Duty retails for $2317, plus the cost of installation. This may seem a bit high at first, but pricing an aftermarket intake, computer programmer, exhaust and header system will run about the same price. Furthermore, considering the fact that the fuel economy savings are substantial and the fact that the stainless steel exhaust will last the life of the vehicle, the Banks system is well worth the investment.