There it was, all 19 (and change) feet of gleaming black carbon fiber: the Banks Top Diesel Sidewinder main body, floating there in space, 6 feet high with that really “speed-hungry” looking snake on the side that seems to spit out a warning to watch out for some Duramax diesel-powered drag racing speed in the very near future.

When you have a 276-in wheelbase Top Diesel Dragster sitting in the middle of a race shop, even one as “roomy” as the Banks shop, it sort of dominates the scene a little. And of course, most of the time that race cars are in the shop, they have their outer skins off so the engineers, designers, and technicians can get at them, doing the endless tasks that are part and parcel of the building and constant grooming of modern race cars.

It’s often said that the best racing machines are only ever fully assembled just an hour or so before the race that they’re in. That’s quite true, and the new Banks Top Dragster is no exception to that rule.As an example, even though this trans-200 mile-per-hour in the quarter mile machine is still under construction, the one-piece main bodywork has been off and on at least twenty times since it got here.Until today, each time it was carefully lifted off the chassis and then laid down on the floor near the chassis.

Everyone in the shop was, of course, quite careful to sidestep the (very) expensive piece of carbon fiber sitting there on the floor and no one, but no one rested any tools, coffee cups, or even a comic book on the long flat surface that made up most of its near 20-foot length. After a while that got a little old.

And then someone, some bright visionary, who’s name is lost to memory right now said, “Why don’t we make some brackets and hang that thing on that nice clear wall over there, it’ll be out of our way and look great at the same time!”

Whoever said that … Thank You!

And that big thank you is because the race shop now has a wonderful “wall hanging”, and that very valuable piece of carbon fiber coachwork with that big old sidewinder on it is now well and truly out of harm’s way.

Of course the best part of it being so prominently displayed is that it just reminds everyone of the task at hand: putting Banks into the lead on the racetrack, on the sales floor, and in the hearts of our many fans and customers. 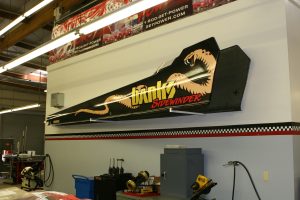