Most people wouldn’t even accept that a supercharger and a turbocharger can live under the same hood. Read on to see how Banks makes it work. 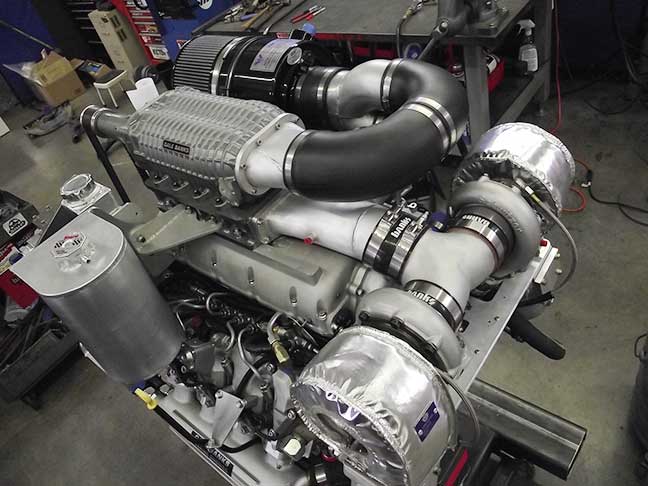 It’s been a few weeks since I last wrote about the Banks Marine Super-Sequential Twin Turbo Duramax Diesel Power Engine (whew… I’m winded just writing that) and I was going to talk about why we added the supercharger to an already stout workhorse of an engine. Most people wouldn’t even accept that a supercharger and a turbocharger can live under the same hood and that usually they are direct competitors of each other. Some have the thought that a supercharger and diesel performance are two things that just don’t add up in nature. Well… yes and no to all of the above. It kind of reminds me of the old commercial for Reese’s Peanut Butter Cups where they have two separate folks enjoying their own “pure” snack: one has a jar of peanut butter while the second person has a chocolate candy bar. Be it through their own clumsy, dumb luck or by an act of God the two smash into each other mixing the two proclaiming that the other ruined their individual snack… until each of them try the mixture. And thus the candy was born for everyone to enjoy! Superchargers and turbos are kinda like that, sorta.

Both of the beasts succeed in making the engine act and feel like a much larger engine thereby increasing power and performance, but they do so by different means. I could get really technical about them and get lost on the individual nuances of the different designs, but nah. I’m going to keep it simple on this one. A supercharger is a belt-driven mechanical device that draws in air, compresses it and forces it into the engine. The great thing about this “blower” is that since it’s connected directly to the engine the added power it’s able to produce is almost instantaneous (depending on the pulley diameter), but drawbacks are that it can literally be a drag as it costs power to make the power and it kind of gets in the way after it reaches its “sweet spot” in the diesel power scheme. A turbo is exhaust driven rather than mechanical so it takes a bit longer than “instant” to produce power, but if it’s sized right can be capable of building more power than throughout the RPM range. Each on their own is a potent machine good for their specific mission, but together with the proper sizing and some by-pass magic the two complete each other, and in this case the result is ultimate in diesel performance. Done wrong it can be a contorted, mutated mess that does a good job of bucking like a honked off bull mixed with a giraffe (an odd picture of raw power and great reach poorly executed). Done right it can be silky-smooth in transition from super to turbo and return great economy with the extra power. The combination has the ability to provide “right now” force with the supercharger adding to the natural diesel power to propel you into the next dimension and the turbos have the ability to keep adding power till you’re through to the other side… wherever that may be in time and space.

It may sound like something new, but in actuality it’s a proven combination that has worked well for decades in lots of different applications, both gas and diesel powered. The biggest thing is that only recently technology has caught up with the idea to help actuate, time and fuel the two power adders into a more professional dance. This is where we shine. Rather than hacking an automotive “brain” and getting whatever control that we can we actually have our own diesel performance ECU with our own goodies inside. There was a lot of time and planning that went into the design of the capabilities of the Banks OttoMind diesel ECU like it has the ability to control up to 8 cylinders and Variable Geometry turbos (electrically, hydraulically or pneumatically actuated). Hence… unlike the two goofs who bumped into each other mixing their delicious snacks together and producing a lucky break our ability to totally control every situation of a diesel engine was well designed from the start. An example of a modern consumer application of a super-turbo comes from our good pals over at Volkswagen who has produced a wonderful little engine that continuously wins awards and accolades for its power and economy. Their 1.4 TSI (they called their application “Twincharged”) gets 170hp (and has gotten WAY more on the dyno), gets like 33 MPG and moves a Golf or Jetta pretty quick. Saddly, the little engine has not made its way “across the pond” yet, but you can read about it by checking out the following link:

» Jump to even more twincharger info*

Now, the way that we do our system is a bit different than how VW and other applications out there are getting the job done. I’ll go into more detail about that in the next installment, as well as super-into-turbo or turbo-into-super. Don’t worry… it’ll make sense. In the meantime check out the rest of our site (www.bankspower.com) for more diesel performance products, articles and stories.

Till next time… have a powerful week.

* Note: This link leads to a website that is not affiliated with Gale Banks Engineering.