Some of you might know (and most of you didn’t have a clue) that we actually went out and put some miles on our little red pick-up a couple of weeks ago. “What, you went out and raced without telling me?” you say. Well, the answer is “yes”, I guess. We didn’t really want to make it a big production since she was going into combat for the first time, and in all reality we are still in the testing phase of this grand experiment. I mean we all like being in the spotlight, but who wants to get burnt? I’d kind of say it was like being a great singer and going to a Karaoke contest at a local club, rather than going on American Idol and bombing out on national TV while getting crushed by Simon (not that I ever watch the show… I hear things about it. Really).

Anyways, all in all we actually found out some really great things about our girl that we didn’t know before and are now better off for it. We tuned the truck to perfection during our limited practice sessions, ran a best time of 1.59 around the track and managed to place third in the line up. Good stuff! But then it was time to race… and that’s when the Murphy came on the scene and reminded us that he has some laws up his sleeves. I guess it had to happen since we had four guys from Bosch as part of our pit crew. What was our main problem? Well, I’d have to almost say it was plagues, locusts, toads, broken mirrors and black cats. Let me explain:

* It started out Thursday when Dave Royce’s flight came in late causing him to miss connection flight from Vegas to Bakersfield… all at 1:30 a.m. Friday. So, Dave had to rent a car and drive all the way to the track for a practice session at 7a.m. Can you say no sleep? That’s how you want to be when getting behind the wheel of a new machine.
* Temperatures were higher than we had ever seen at any previous practice session. Fluids (every one of them) were up and the exhaust gas temp was skyrocketing as the guys tried to wring every last drop of power out of the engine.
* It turns out that the turbos are not quite the size we had wanted. Since the turbos are too small the power goes to a certain rpm… then the whole thing hits a wall while power goes spiraling down and the heat rises. Not good, she needs more air.
* POW! One of the turbos blew up Friday as we made some of our best time on any track. Before the splat everything seemed to be working great.
* It wasn’t until 12:25 a.m Saturday morning that the truck was put back together, run and aimed the headlights (this race was a 3 hour night enduro and we have never practice after dark).
* During Saturday’s 9 a.m. session the primary driver, Leno’s main man Bernard Juchli, had an “encounter” with a Shelby Cobra, slashing the side of the truck and destroying the rear tire and rim in the process. Needless to say… practice was over. He did a great job of bringing her in safe and sound.
* With a fresh set of tires all around the truck went out for a second test session under the command of Dave Royce. This guy drives like a cyborg on nano steroids and shifts with superhuman speed. Track times were looking the best yet after some adjustments to calibration and the rear wing. But (and you knew that there had to be one of those) Royce got a penalty for passing a car during a yellow flag. An absurd call, but since the Banks “Bruisers” had already rubbed paint with a guy that morning, we were a “professional team” (give me a break!) and Dave is a well known driver the officials thought they couldn’t take a chance on us. The punishment for our transgressions was a lap and a half sit-out in the penalty box.
* It’s dusk now and just as Bernard heads over to the waiting area the truck goes “clunk” and chugs like a teenager learning to drive a stick shift for the first time. Was something wrong? Was that another sign? I think perhaps, because just as Bernard was signaled to join the race already in progress the truck leaped into action… and then coasted to the side of the road. The driver complained he had no gears…
* The tow truck picked up Bernard and brought him over to the pits, leaving out our pride in a grassy field till the race was over at 10… adding insult to injury.
* And one of the worst parts? Well that had to be from looking at the competition’s lap times. One of the fastest ones out there was a fully raced prepped Viper was running the 2.8 mile course at 2.02. We were running the track at 1.59 during practice and were sure we’d be able to get 1.57 with some new cals. Another lead competitor made 6 pit stops, while we were only scheduled for one. Even with the penalty we would have done great. More pain.
* Oh yeah, during the day a pretty horrible crash occurred during the Shelby Cobra race as a guy who was trying to bring his car back on the track smashed into another guy sending him end-over-end several times. The paramedics worked on the driver for quite some time, but the poor guy didn’t make it. Another sign.
So there you have it. All we needed to complete the day was for the Space Station to fall from orbit onto the truck. At least I can honestly say that the truck was sound and that nothing Banks, GM or Bosch engineered was faulty. As it turns out that a pinion in the quick-change rear-end snapped taking out the bearings and the gears. When it was speced out for us we were told it’d be “just the thing we needed”. I suppose the breaking action was a part of the deal too? Aside from that the truck handled like a dream for being such a big and heavy vehicle, never sliding and holding steady G’s all the way through turns. Some guy who takes action shots of all the races was selling photos of our truck for $70. People loved it, and all were disappointed (even the competition) that the truck didn’t make the race. We have the makings of a hit… we just have to make sure that it’ll hold together.

Below are some pictures from our outing. You’ll laugh at the destroyed tire and rim. I want to hang it up in my new office and make it into a clock.

PS:
To our Bosch partners who worked so hard in the pits with us… we’ll get ’em next time. You are always welcome to crew with us! 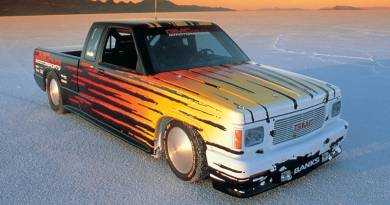 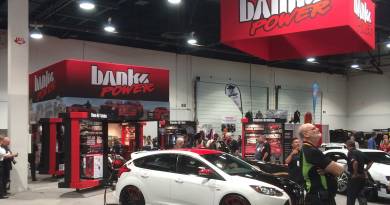 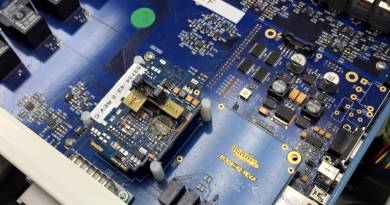 Hey, Eco Boost Owners, my guys are getting clever and I’m loving it!