A signature Pewe driver’s meeting spoke of a “short” road day that would take us across Iowa and towards Illinois. Of course, our short road turned out to be a cool 277 miles long—a good drive in any vehicle, but in a group of more than 20 beaten-on 4x4s…it was a long day of driving.

It was day 4 of our Ultimate Adventure, and we packed to leave our grassy knoll near Waterloo, Iowa, after two days of camping there.

A signature Pewe driver’s meeting spoke of a “short” road day that would take us across Iowa and towards Illinois. Of course, our short road turned out to be a cool 277 miles long—a good drive in any vehicle, but in a group of more than 20 beaten-on 4x4s…it was a long day of driving.

Of course, fun was packed into anywhere it would fit, whether it was full-grown men playing absolutely childish pranks on each other, or just enjoying the sights as we traveled through lands that most of us had never seen before.

Our first stop brought us to a private farm near Bushnell, Illinois. The owner was more than nice and welcoming, and showed us what true Southern hospitality is like. He had a few trails through his land—mostly covered in corn (in Iowa?! Who would’ve guessed?)—that he let us parade through. A few good hillclimbs made for a ton of fun, and we ended up getting out in time to hit another off-road location after that. A road day, plus two different off-road locations on a single day? No wonder a few guys were starting to look delirious!

After our double off-road stop, we got back on the highway and further south in Illinois to our next camping location. This time Pewe had something a little ritzier scouted out, and we camped at the Hopewell Winery in Pittsfield, Illinois. It was the earliest finish of a day yet, and we took the opportunity to catch up on some friendly bantering between the attendees, and then a good night’s sleep.

We were never sure what Rick Pewe had in store for us the next day, and it was best to be well rested and ready.

We knew that “all the dots were no longer connecting” in many of our crew. Lack of sleep, extraneous activity, and basic malnutrition were starting to get to them.

In fact, we think a few of them might have downright lost their minds…at least temporarily. 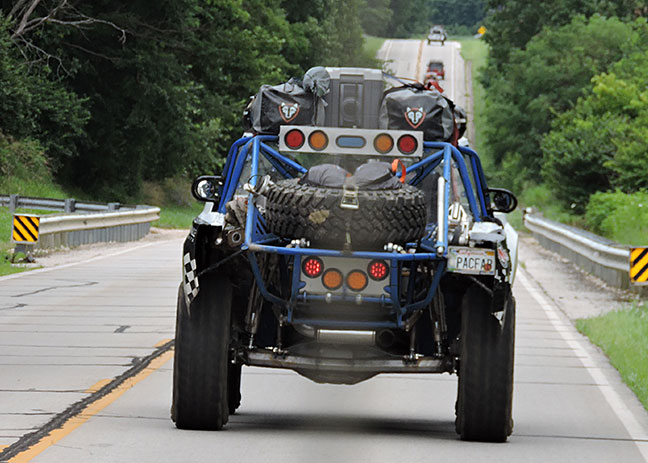 Cooper Rasmussen of Diesel Power Products unfortunately was the recipient of some body damage initiated by goodwill: At our second off-road stop of the day, one of the locals with a big fullsize solid-axle Chevy got stuck and Cooper offered him a pull out. Unfortunately the tow point was not welded onto the frame correctly and it came tearing off with enough force to do this damage to the Ram’s tailgate and 3/16-inch steel plate bumper. Maybe it’s time for 5/16 plating? 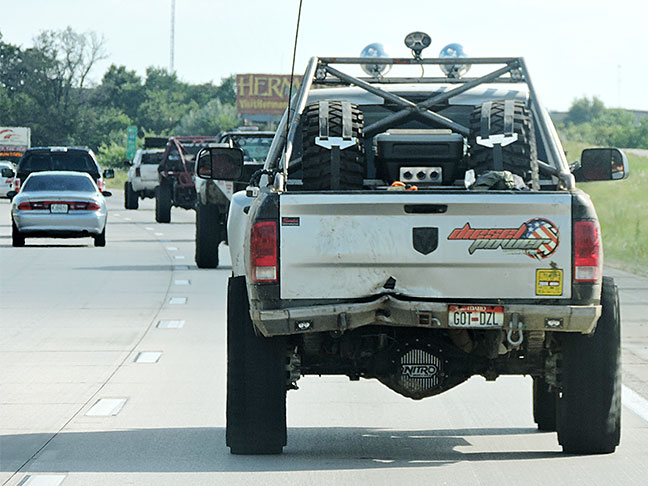 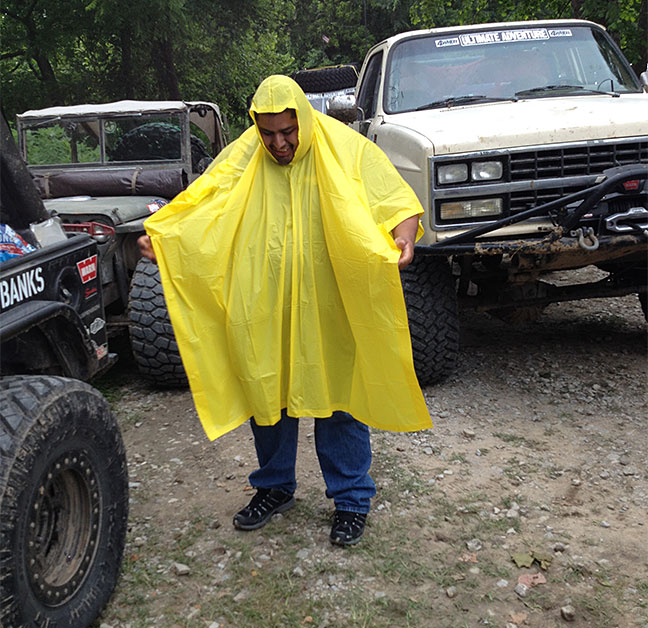 Gusto needed a poncho in case of rain so we did him a favor and grabbed one—the brightest one we could possibly find. We won’t lose this big banana in the forest again.