It’s not unheard of for experimental prototype vehicles to run in the Baja 1000, but even so, it’s quite unusual. That’s why the Oshkosh Extreme Racing team’s Light Concept Vehicle (LCV) created a stir in this year’s Tecate SCORE Baja 1000. Largely unnoticed in the racing excitement was the fact that both prototype LCVs were equipped with upgraded Duramax diesel V-8 engines, specially prepared by Banks Technologies, a division of Gale Banks Engineering. 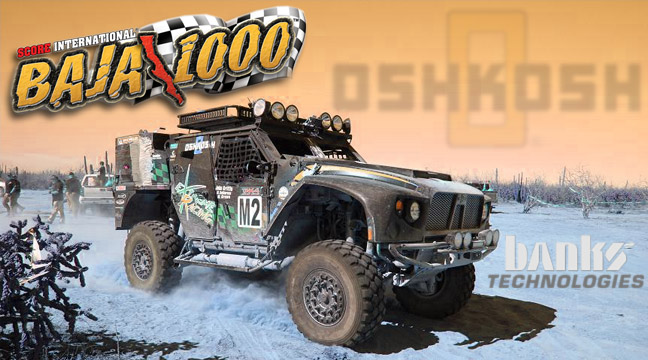 It’s not unheard of for experimental prototype vehicles to run in the Baja 1000, but even so, it’s quite unusual.  That’s why the Oshkosh Extreme Racing team’s Light Concept Vehicle (LCV) created a stir in this year’s Tecate SCORE Baja 1000.  The company entered two LCVs, numbered M1 and M2, which were driven by members of California Gold Racing, led by Glenn Harris. 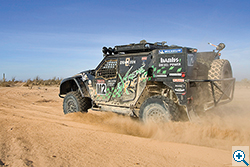 The vehicles, which incorporate features that might make their way into the specialized vehicles Oshkosh builds for civilian and military customers, stand out as something very different among the usual bikes, trucks and buggies that race the event.

Largely unnoticed in the racing excitement was the fact that both prototype LCVs were equipped with upgraded Duramax diesel V-8 engines, specially prepared by Banks Technologies, a division of Gale Banks Engineering.  Banks Technologies supplies turn-key powertrain solutions to customers who require exceptional levels of power density, durability, and reliability in a fully-integrated package. 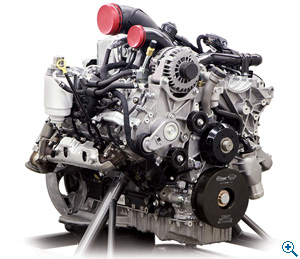 A team from Banks Technologies was in Baja to provide technical assistance throughout the race and for prerunning prior to addressing the demanding 1061-mile desert race course.  “We’re proud to be a support partner for Oshkosh at Baja,” said Gale Banks, “as they push technology development through racing.”  When the race started on Thursday, the Banks Technologies engineers became part of the chase crew.  Here are notes about their experience from Matt Trainham, Gale Banks Engineering Engine Systems Group Lead:

“Departing Ensenada and heading south on Highway 1, passing El Rosario’s beautiful, empty beaches, past schoolchildren waving and into the middle of the peninsula, with its unusual cactus and desert animal life. We were still heading south Thursday at 1 pm, when race vehicles took off from Ensenada.

“By 5:30 pm, we reach the first planned pit location, approximately 20 miles west of the Bay of Los Angeles.  Early radio chatter and GPS tracking details indicates the racetrucks were working their way through the course, but soon enough both trucks experience downtime, making it obvious that it will be mid-morning the next day before they reach our pit.  An hour later, the first trophy trucks start coming through, some stopping with the BFG crews for fuel and tires, some not…

“Later that night, we heard the M1 unit had timed out, but see M2 heading steadily our way.  It would be Friday morning at 11:38 before the Oshkosh M2 truck hit our pit for a driver change, fuel fillup and spares restock .

“It’s been a long day (and night) for everyone, but soon the M2 is back on a highway portion of the race track, heading for the Bay of LA.  We pick up and pack the pits, then turn around on Highway 12 and head for San Ignacio via Guerrero Negro.” 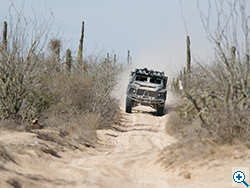 As the hours wear on, day blends into night and the days all run together.

Not surprisingly, the Baja 1000 has long been used as a venue to conduct real-world accelerated wear testing.  The terrain is highly irregular, and the dust and moisture associated with off-road racing taxes every component, from the frame to the axles to the engine.  Engines are especially vulnerable as fine airborne silt clogs filters and contaminates lubrication systems as drivers operate at near-redline rpm levels for hours at a time.  Electronic components and their connectors are also stressed by sharp temperature changes, extreme vibration levels and occasional sections of mud and standing water.

There are so many unknown factors that can disable a vehicle, with harsh conditions throughout, that it’s considered a victory to just complete the course. This is especially true of entrants who are racing for the first time. “Approximately 58 percent of all vehicles that start the race, are able to finish the race,” said Sal Fish, SCORE International’s President and CEO, which has sanctioned and produced the event since 1975. “I know I speak for the entire SCORE staff and race officials when I say we are impressed with how well the Oshkosh Extreme Racing team performed during their inaugural run.” 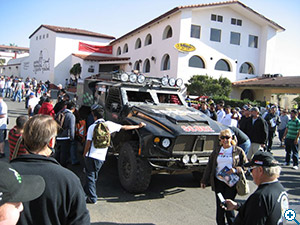 The Duramax V-8, which appears in General Motors HD pickups and chassis-cab vehicles, is one of the most versatile and flexible engine platforms on the market.  In stock trim, the most powerful factory version is rated to produce 397 horsepower and 765 lb.-ft. of torque at 1600 rpm.  Banks Technologies has accumulated thousands of hours on the dynamometer with the engine, and supplies variants ranging from 300 hp to 800 hp, complete with custom Banks Automind® electronic controls.  Customers come from racing circles, the marine industry, law enforcement organizations and defense suppliers. 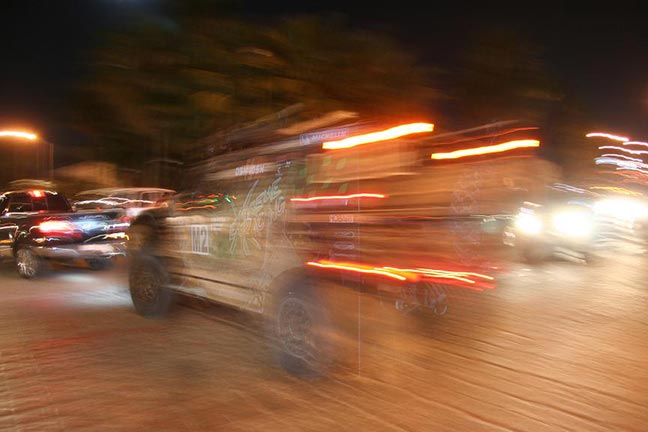