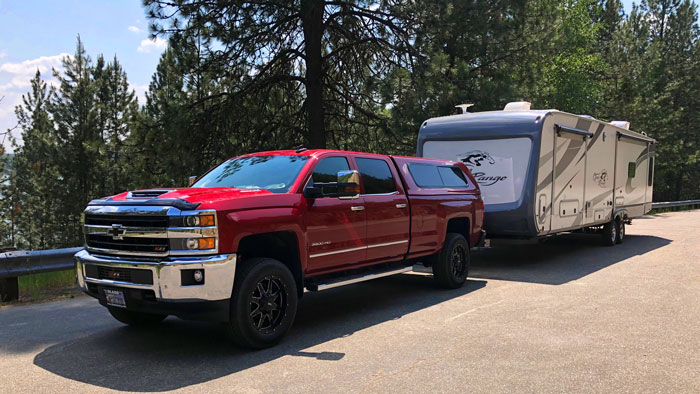 Banks customer Rick Libbey purchased the Derringer last year for his 2018 Chevy Silverado 3500 for some much-needed power, but it didn’t help a problem that the truck already had. “The Derringer was a big improvement,” said Rick enthusiastically. “The truck always downshifted from sixth to fourth even before the Derringer when towing my trailer, but after installing the downshift was sometimes harsher than before. I mean I could drop 15 to 20 miles per hour before the darn tranny would downshift, and it would always skip fifth and go to fourth. I started manually shifting, but that was a pain in the butt.”

Rick decided to take another look at Banks and decided to purchase the PedalMonster. “The PedalMonster totally took out the mushy throttle. I towed my trailer out to Montana with the PedalMonster and it worked awesome, having the transmission downshift probably 80% faster than it used to, making hitting the hills in sixth and only going to fifth instead of slamming fourth after pushing the pedal three-quarters down. Now I only run the pedal a quarter of the way to maybe halfway down and then have to back off, but still maintain my speed. With the addition of the PedalMonster I got more boost and such a better response. Now I drop like three of four miles per hour and the truck shifts into fifth. This time with the PedalMonster installed everything seemed so much easier on the truck, easier on the tow, and I also check my mileage every trip on the same road filling up at the same stations and always got 9.5 to 10. This trip I got 10.3 to 10.5 and traveled with more even speed up all the passes.”

Rick was so impressed with his results from the PedalMonster that he decided to get one for another vehicle in his stable. “Two days after installing the PedalMonster on my truck my wife got her Colorado with the 2.8-liter Duramax, and that thing had a worse delay than my truck. Absolutely the worst! It just wouldn’t go anywhere, so I ordered a PedalMonster for hers. It made that truck drive totally different. The wife thought it was going to be a waste of money, but now I have to keep turning it down because she loves taking off fast and chirping the tires. She loves it, and says that I’m not allowed to remove it.”

“One more thing: I used to run the Edge monitor on my truck before getting the iDash… and it’s a world of difference. I love all the things that I can monitor on it now, so made sure to buy one for the Colorado too. And that was a smart move because there was something going on with the truck where it would regen three to four times per tank. The dealer was skeptical of my complaints, but since I was able to monitor the regen cycles with the iDash I was able to go to them with the info I needed and get it fixed. Thanks, Banks!”