DIESEL TRUCKS TYPICALLY ARE USED FOR TOWING AND HAULING HEAVY LOADS, AND WHILE A POWERFUL DIESEL ENGINE CAN EASILY GET HEAVY LOADS MOVING, IT OFTEN TAKES A LOT TO STOP THE LOAD IN A HURRY, AND IT SOMETIMES EVEN REQUIRES ADDITIONAL MEANS TO GET IT STOPPED IN TIME.

These are considerable safety issues that the OEMs have taken into consideration as they build heavy-duty pickups with bigger and bigger hydraulically assisted brakes, and include such factory options as electronic trailer-brake controllers and exhaust brakes for those who know they need these better options to haul heavy loads safely.

But in addition to need, there’s also the convenience factor of such upgrades, especially an exhaust brake. And what if your diesel truck is not so elaborately equipped, and you want to use your truck in a safe and efficient manner? 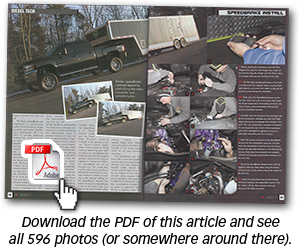 Enter the team of diesel geniuses at Gale Banks Engineering, who have developed the Banks SpeedBrake for exactly these reasons-to provide much- improved braking capability along with an easy aftermarket installation. This new Banks SpeedBrake design even has a speed-control mode that acts like an exhaust-brake cruise control that controls maximum speed by reining in the truck at a pre-set speed while coasting down an incline. But that’s not all.

The Banks SpeedBrake was engineered to electronically control the transmission, torque converter and factory variable- vane turbocharger, all in an effort to provide additional braking force-of the truck and its heavy load-totally independent of the vehicle’s front and rear brake system. A Banks PowerPDA is used as the control center and interface between the Banks software, wire harness and controller, and the factory components in the truck. The PowerPDA is a Palm Tungsten E2 that can be purchased directly from Banks, or, if you wish, you can supply your own. The Palm can still be used for all of its normal PDA functions, even with the SpeedBrake software installed. (See note at the end of the article for an update on the PowerPDA.)

Functionally, it features three modes of operation: the “On” mode activates the SpeedBrake any time you are off the throttle by downshifting the transmission (without over- revving the engine) and closing the turbocharger vanes to achieve braking and slow the truck to approximately 15 mph. In the “Speed Control” mode, the SpeedBrake varies the position of the turbocharger vanes and selects an appropriate gear to best maintain a pre-selected target speed between 25 nd 75 mph. In the “Off” mode, the unit has no effect on normal operation of the truck.

Additionally, the SpeedBrake has a “Foot Brake Activation” mode. When enabled and in the “On” mode, it will cause the SpeedBrake to become active only when the foot brake is applied, thus effectively making the foot brake also an activation switch for the SpeedBrake functionality. When the SpeedBrake is in “Speed Control” mode and the “Foot Brake Activation” mode is enabled, it will operate in normal “Speed Control” mode, either limiting speed or doing nothing, depending upon vehicle speed and SpeedBrake settings; but when the foot brake is applied-such as when exiting a highway or slowing for traffic- the SpeedBrake will act as though it is in “On” mode, closing the turbo vanes and down- shifting the transmission to provide maximum braking according to the strength setting on the SpeedBrake. Another big bonus of using the SpeedBrake is that it will reduce wear and tear on the wheel brakes while making towing heavier loads safer. What’s more, you still have the full functionality of the wheel brakes, which can be used whenever necessary.

The SpeedBrake also features OBD II scan-tool capability, which allows the user to read, interpret and clear diagnostic trouble codes should the “check engine” light come on for any reason. It also has an anti-skid safety program built into its operation. The system is so effective at slowing the truck that consideration needed to be given to operation when driving on slippery roads.

The SpeedBrake processor monitors and compares front and rear-wheel speed, and if a differential in speed of more than 5 mph is detected, the SpeedBrake automatically disengages itself and alerts the driver to apply the foot brake. The Banks anti-skid safety feature is similar to the function of the factory anti- lock braking system.

We wanted to learn more, so when Brad Lett decided to install the Banks SpeedBrake on his ‘08 Chevy Silverado 2500 HD in his garage at home, we asked to follow along. First, a little background. Lett uses his truck to tow his ‘69 Camaro in a 35-foot enclosed trailer on a regular basis, so additional stopping power was a welcomed upgrade and a huge safety-margin bonus when towing his prized Camaro. Those are pretty simple ground rules, if you ask us, and when we saw that the entire installation took only about two hours, including time for photography, it naturally leads us to believe that almost any home “mechanic” should be able to finish the installation in roughly the same time using only basic hand tools.

The basic SpeedBrake installation consists of disconnecting the batteries and routing the supplied wiring harness from the factory ECU on the top side of the engine down under the truck to connect to the transmission harness. Another part of the Banks wiring harness routes to the top of the fuse box (on the driver-side fenderwell), where the SpeedBrake module will be mounted. The final leg of the harness is routed inside the truck cab, where it interfaces with the factory harness under the dash. An OBD II interface cable also is supplied and connects to the Banks harness.

The team of Banks engineers developed the SpeedBrake harness using factory mating connectors to intercept the factory signals to make the installation easier and more secure, since the installer does not have to cut and splice any wires on the factory harness. With the intercepting connectors on the SpeedBrake harness, you simply unplug the factory connector, plug it into the female end of the interceptor and plug the male end of the interceptor into the factory connector. By using this method on the harness, the Banks engineers also made sure that you do not make mistakes while installing the unit-such as splicing into the wrong wire or not getting a solid connection with the splice.

While driving Lett’s truck with and without his 35-foot trailer, before and after the SpeedBrake installation, we witnessed a dramatic difference in braking performance. Before the installation, when he let off the throttle, the truck would simply coast, scrubbing off very little speed despite the mass of the rig and the large tires. With the SpeedBrake installed and operating in the “On” mode, when he let off the throttle, it felt as if he applied the brakes heavily, as the truck came almost completely to a stop, and all without once touching the foot brake pedal.

As Lett put it, “I couldn’t believe the difference in the stopping power, pulling a heavy load or even when empty-it is as if you don’t need brakes at all.” He added, “The SpeedBrake is an absolute must for anyone who pulls any size trailer. I saw the ads by Banks, and it did look pretty cool, I admit, but I was not expecting the SpeedBrake to work as effectively as it does. I have driven fire trucks and several 3/4- and 1-ton pickups with your typical exhaust Jake brake, and while they worked well, they made a ton of noise and are time-consuming to install. I believe the Banks SpeedBrake would hold more than its own with any Jake brake on the market.” Lett concluded, “I strongly would encourage anyone even thinking of a brake-assist system on a Duramax diesel to consider purchasing the Banks SpeedBrake today.” That’s how elated he was with the ease of installation and, above all, how well the system works.

Since Lett’s truck is lifted it was easy to crawl under it to attach the harness to the transmission and to take photos. If your truck is stock height or lowered, you will need to lift the truck and properly support it with jackstands before working underneath. In these situations, you should use caution, and always practice safe garage techniques whenever wrenching on, around or underneath your truck.

If you do not feel comfortable performing this installation, it can easily be installed by your local diesel performance shop, and Banks has a number of install specialists around the country who sell, install and service Banks systems.

For those of you who plan to install the SpeedBrake on your own, follow along as we witness how Lett installed a typical Banks SpeedBrake system on his ‘08 Silverado 2500 HD.