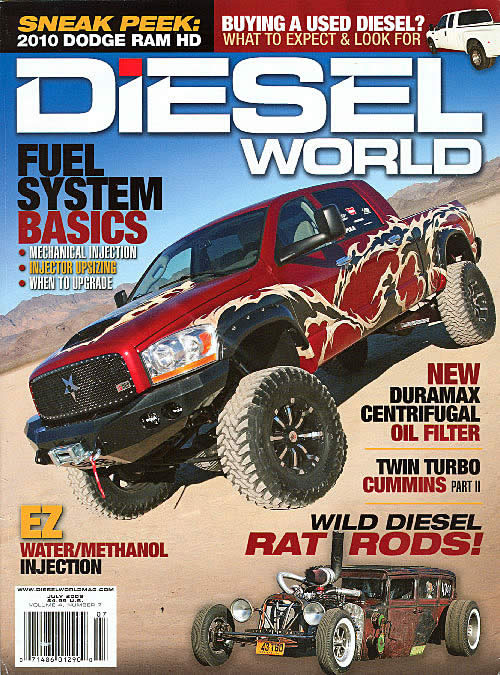 Diesel World magazine gives an update on the industry, including the NHRDA event where the Banks S-10 had a 7.77 at 180 mph run.

Thanks to the magic of magazine production, where we are so far ahead of ourselves we’re producing the July issue in the middle of March, I just wrapped up covering the second annual Desert Diesel Nationals at Speedworld, just north of Phoenix. Ariz. I guess you might consider this one as the “first” diesel event of the 2009 season. Hosted by the NHRDA, the event attracted a good number of folks from the Great White North who were thrilled to be in sunny. 70-degree weather to shake down their diesel hot rods for the new season.

Most notable were the debut of a new 12-second diesel rat rod from Billings, Mont., and a handful of Canadians who came all the way down from Alberta only to pop a piston in their Dodge pickup after runs in the 11-second bracket. Also on hand was Zane Koch and his record-setting 7.3L Ford; Texas Diesel Power’s John Robinson and his diesel funny car; and Gale Banks’ pro stock 8-10. The Banks boys came out a day early for some serious test and tuning, and with a grand total of six solid runs, they were able to break the 180-mph barrier with a record-setting pass of 7.77 seconds at 180 mph.

Even more notable was the fact that Gale Banks himself was on hand for the event, and spent a good chunk of his time talking with diesel enthusiasts and signing a few autographs. Banks Engineering is celebrating their 50th anniversary and the founder, Gale Banks, was recently honored with a Distinguished Service Citation by the Automotive Hall of Fame at the beginning of the year. Best of all, he’s just a regular guy at the track who can bench race with the best of them. Congrats to the Banks Team for their record-breaking run. Now we want to see what that motor will do in your new rail that was debuted at SEMA.

The event was also a good tune-up for us magazine guys for what looks to be a busy season in 2009. Lots of events, plenty of new trucks and some cool and innovative stuff coming out of the woodwork, like Steve Darnell’s way-cool ‘28 Dodge Brother’s rat rod. There’s a sneak peek at this creation in our “News” section. Look for the full feature on it, along with coverage of the Desert Diesel Hats, in next month’s Diesel World magazine.

On another note, there has been a lot of hubbub about whether or not the Big 3 will stick diesel powerplants in their half-ton pickup lineup anytime soon. There is a lot of misinformation floating around in other publications regarding this. So to set the record straight, let’s look at the facts.

First off, the development work on the new powerplants is complete for Ford, Chevy and Dodge. The engines have been tested and EPA certified, and are ready to go. Some folks assume that since this step is complete, it’s a no-brainer to stick them in the truck and sell them. Yes and no. There are a handful of test mules running around out there, and probably a few pre-production prototypes, as well. The real holdup on this deal, however, is the economic state these companies are in.

By the time you read this, GM may or may not have already filed for Chapter 11, and if Chrysler doesn’t nail down a dancing partner soon, they will be right behind GM. So what that means is that all new product is on hold for now. There’s just no money to push it forward, and without a dealer network to sell it, it’s another great product that will never see the light of day.

Does that mean we’ll never have half-ton diesel trucks? No. My bet is Ford will move forward with their light-duty diesel project that they also have on hold until the economy bounces back. If and when GM and Chrysler reorganize, get rid of product that doesn’t sell and start making vehicles that the American public will actually buy, then we may still see that diesel half-ton in the near future. I sure hope so.