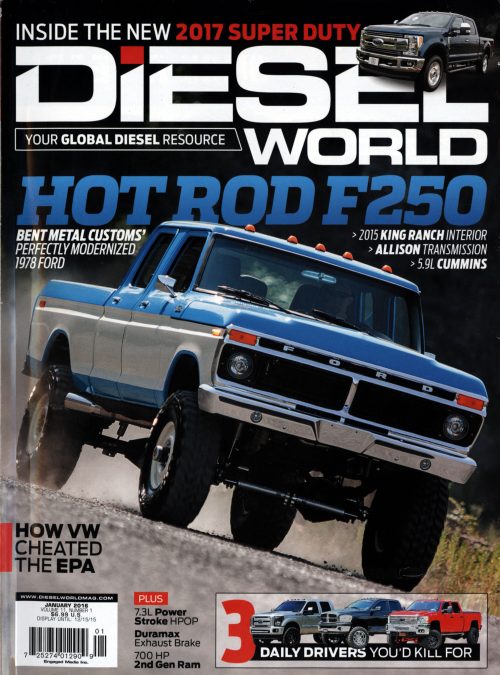 Installing the SpeedBrake on a Duramax (With Gale Banks!)

Just a few short years ago, the thought of 600 hp and 1000 lb-ft. of torque in a daily driven street diesel was unimaginable. But thanks to the marvels of technology, not only is this kind of Insane power possible, It only takes a handful of mods and a weekend with a capable group of friends.

Funny thing is, everyone talks about adding big power and having the capability of towing more than four times the weight of their trucks, but seldom do owners talk about slowing all that mass down. That’s right, your big-power rig might be able to yank a 20,000 pound trailer up the steepest of grades, but what about on the backside? Are your brakes cooked, pedal mashed to the floor, causing you to white-knuckle your way to a runoff spot? While that might be a bit of an overstatement (since most modern brake systems are capable of hauling down sizeable loads in most conditions) how much is really left in reserve? In a panic situation, do you have enough to safely slow down your truck and trailer? What if you could distribute some of the deceleration forces away from the brakes and into the engine and drivetrain? As it turns out, it’s possible to do so with modern Duramax and Power Stroke-equipped trucks.

MUCH MORE THAN EXHAUST BRAKES

As l’m sure you already know, exhaust brakes can be quite effective at scrubbing speed. In most cases, an exhaust brake is a pneumatically controlled valve placed in the exhaust system that can increase backpressure and thus decelerate forces. But as effective as exhaust brakes are, traditionally they’re either on or off,” which means there’s very little modulation. According to John Espino of Banks, as far back at the late 90s, Banks was experimenting with improving the braking performance of street-driven diesels, and although they made a great exhaust brake at the time, they were looking for the ultimate fix and quickly realized that a traditional exhaust brake just wasn’t going to cut it:

“We came up with the idea of using the brake for more than on or off’ braking by creating the methodology of using the brake as an active component that would regulate downhill speed and the braking intensity based on a set speed point the driver selects.” he said.

OK, so they wanted to incorporate an all-encompassing braking system for street driven trucks, but how did they go from concept to reality? Our first prototype was for the Ford Power Stroke equipped with a 7.3-liter engine. The electronics we created were extensive. and rather complicated. Since this effort predated CAN we had to use a lot of wiretapping to get the signals we needed to make it function correctly. It worked awesome. moving the back exhaust pressure valve constantly to regulate speed and the amount of braking force…but at a cost of around 20 wire taps. Thats 20 taps that can lose connection. or be Installed incorrectly. It was a great idea that worked well but just wasn’t commercial. We needed technology to catch up with what we were thinking,” Espino said.

Although it took the OEMs a decade to catch up. when stock diesels started arriving with variable vein turbos from the factory it meant that Banks’ goal of providing a comprehensive braking system could finally come to fruition. The SpeedBrake ls purely electronic and plugs directly into factory connections, and through the Banks lQs touch screen. The user can set the target speed that they feel comfortable with when heading down a greade, and the SpeedBrake will work to keep the truck and its load in that zone. Think of it as downhill,” Espino said.The SpeedBrake works by reading signals from the CANBUS, varying the vane position (on the turbo since the Duramax uses variable vanes) to provide optimal engine backpressure, controls the transmission to shift to the best gear for any braking situation (without building excessive RPMs) and locks the torque convener all to optimize the braking performance that you set,” he added. You get the point, it uses many different parameters like the turbo the transmission and the torque converter to help slow downhill speed. But what does this mean from the drivers seat? Well, it means that not only can the driver set a downhill speed that the truck will then adhere to without having to monitor the brakes, but in the event the driver wants even more braking performance beyond stepping on the brake pedal harder, the SpeedBrake settings can be cranked up to more aggressive parameters so that the engine, turbo and drivetrain help to further scrub speed.

As were come to expect from Banks, the installation of the SpeedBrake was nice and simple. In our case, wed previously installed a SixGun tuner, which meant the SpeedBrake was a plug-and play affair, but for those who don’t have a Six-Gun,the SpeedBrake can also be Installed as a freestanding unit. Although we must admit, that in order to take full advantage of the SpeedBrakes options and the many handy features the Six-Gun has to offer (user-set speed, coolant and transmission temp alerts, live fuel economy and full control over the SpeedBrake) it’s in your best interest to pair it with the SlxGun. As for the actual installation, we paid a visit to Stanton Performance in Martinez. California, for a tidy and thorough install. Owner Jeremy Stanton had our 2006 Chevrolet Silverado 2500 In and out In a few hours thanks to his expertise coupled with the detailed instructions and the plug-and-play nature of the product.

Having used the SpeedBrake for several weeks now, we had no Idea how we towed without the SpeedBrake the first time we were hooked up to a head load. Seriously, If not for the incredible downhill speed settings that allow one to set it and forget it, the fact we can dial in the aggressiveness of the settings for descent levels or payload makes this product invaluable. We were already fans of the iQ tuner since it gave us control over the CAN-BUS system on the truck, but now that we can also control our downhill speed with the poke of a button, we’re beyond impressed. The Installation was simple, the product works flawlessly. And now we can hold safe road speeds on hills without cooking the brakes or excessive RPMs. If some individual had told us the SpeedBrake worked this well, prior to our testing, we would have called him a dreamer. But now that were tried it first hand. You can call us believers.

1. The Banks SpeedBrake comes with everything needed to slow your Duramax in a hurry, even a CARB sticker, all the necessary wiring. thorough Instructions and the PCM unit.

2. Heres the brains behind the SpeedBrake, and it mounts safely under the hood. The SpeedBrake can be used as a freestanding unit or for even more control, it can be connected to the Banks iQ tuner.

3.  A quality unit is nothing without a proper infrastructure, so Banks goes to great lengths to create OEM-quality harnesses that can stand the abuse and are cut to exact dimensions.

4. The SpeedBrake plugs directly Into the OBDII port of the Duramax so that it can communicate with the CAN-BUS system.

5. We turned to Stanton Performance for the Install, and owner Jeremy Stanton had the SpeedBrake Installed In a couple of hours. After disconnecting the negative from the battery terminals. He began the install by removing this support bracket to gain access to the fuse panel.

7. Underneath the fuse panel, you’ll find this OEM connector. The Banks harness will need to be plugged inline.

8. Next, you’ll want to install the Banks grounding ring connector to this ground bolt below the fuse box.

9.  Now you’ll need to plug the Banks connectors inline between these two OEM connectors underneath the fuse box.

11. Don’t forget to plug the main SpeedBrake harness cables into the appropriate OEM plugs. The quality of the Banks connectors is unparalleled.

12.  Now its time to go fishing-for wires that is! Actually, lt’s time to feed the Banks connector into the cab so that it can be plugged Into the dash-mounted iQ unit.

13. We taped the wires to some rigid mechanics wire and fed It through a rubber grommet on the firewall.

14.  Now the optional Tuner-to-SpeedBrake cable can be plugged into the supplied OBDII interface cable.

15.  Next, move underneath the truck and find the main transmission harness connector on the backside of the transmission: Unplug It.

16. After routing the Banks Transmission intercepting Cable down to the back of the transmission, plug the connector inline and safely mount the harness out of harms way.

17. Next we move under the hood to mount the SpeedBrake with the supplied Velcro adhesive strips to the fuse box. Note that we’d already mounted the Banks iQ on the top of the box, so we secured the SpeedBrake to the side.

18. Using the Banks 10 tuner. we can now control the SpeedBrake and the engine tuning settings on our Duramax with a few pokes of a button. How’s that for Integration?