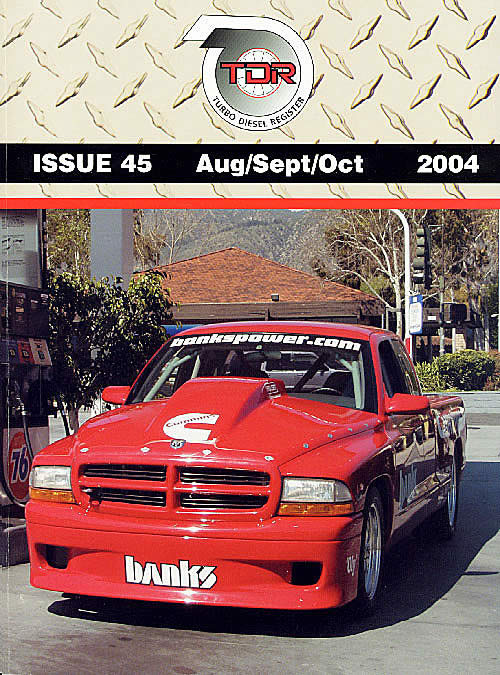 Some years ago, I had a photo assignment at Willow Springs Raceway to shoot a new 904 Porsche with a 911 engine replacing the original, damn-the-cost, four-cam, bevel-drive unit. As an on-again, off-again Porsche enthusiast, I had convinced myself that this little rocket could be the perfect street machine. That was before the ride around the track. Race machines make marginal street machines at best, no matter how keen the prospective owner might be toward the project.

As a motorcycle and automotive journalist, I was invited by Sheldon to take a ride in the Dakota Sidewinder: “Come on down to the shop and we’ll go for a ride in the little red truck.”

Cool, I thought! I’ll learn some tricks applicable to my ’01 Turbo Diesel. Wrong! Before reviewing what’s new at Banks, before getting into details of their next Bonneville adventure, before pictures of cool stuff in the race shop, I’ll cut to the meat of the Sidewinder, go-for-a-ride review. This thing, like the Porsche 904, is a marginal street machine at best. The engine is up to the task, idling around town while returning 21 mpg on #2 diesel fuel, but the chassis necessary to safely go 222 mph is harsh!

Starting with metal-to-metal suspension pick-up points and lack of sound deadening, add the death-like clacking of the variable vane turbo, race brakes and side-exit exhaust and you have a combo that even the best OEM stereo struggles to overcome. I wondered why the first thing Sheldon did before starting the engine was to turn on the stereo!

When Sheldon was able to find a suitable section of freeway, all was forgiven, as the astonishing acceleration focused my view on the upcoming freeway off-ramp with laser-like attention.

It is not because of a lack of reliability that Sheldon gives journalists test rides rather than giving them the keys. This truck has NASCAR-like performance while weighing 50% more than Dale’s Chevy. Even with the biggest racing brakes available, the weight of the truck makes itself felt in stops from high speeds. Mistakes in this machine would be, shall we say, beyond embarrassing. I was thrilled to have been shown the ropes by a professional driver. Could this be the coolest ride for cruise night? I think so! Now, back to the race shop.

Gale Banks is building a new campus near his existing complex in Azusa. When completed, the racecars that have built the Banks reputation for horsepower and durability will be housed in their own museum-like facility.

Until then, the 300 mph Firebird, the Sidewinder, and the soon-to-be built Cummins-powered streamliner reside in the race shop amongst dyno rooms, CNC machines, engine assembly rooms, SEMA displays, and fabrication tooling.

The common-rail engine development program started on the dyno with the deliberate destruction of a new engine. By adding progressively more boost and fuel, two pistons finally gave up, confirming suspicions that the intake manifold—which tapers drastically to the front cylinder—was not evenly distributing pressurized air throughout the six cylinders.

The photo clearly shows the restrictive design of the stock (black) casting versus the new Banks Big Hoss intake manifold. Installation is difficult, as the stock manifold must be cut off the cylinder head and the head ported before the Big Hoss can be installed. Results, which will be confirmed again at Bonneville this year, are substantial!

At the start of the Sidewinder project last year Cummins sent Banks a blue-printed high-pressure, common-rail, B-series engine which dyno’ed at 386 horsepower—big turbo, big fuel system. By adding the Big Hoss intake and porting the head, this figure jumped immediately to 500 horsepower. By then adding a bigger turbo and injectors to match the intake’s potential, this figure jumped to over 700 horsepower. This engine combination will go to Bonneville this summer to make certain the LSR stays with Banks and does not travel back to Detroit and the shop of Jack Roush who ran 205 mph last year with a PowerStroke-engined Ford Ranger.

This year Banks’ Bonneville participation will be all business: no towing a trailer full of wheels and tools, no on-the-road publicity shots. Sheldon, quite seriously, says “We’re puttin’ on the race face. When we unload we will be ready to push the record out of reach for anyone in the foreseeable future.” Asked for a mph figure, he would only smile. This was the same smile, incidentally, that he employed when we were driving on the freeway.

It was very apparent talking with Sheldon that the new HPCR Cummins engine is held in high regard at Banks Engineering. They view the potential for increased performance as vast, and several engines in different intercooler/turbo configurations were stashed here and there in the shop. Sheldon indicated that, while not as easy to hot-rod as the older 12-valve engines, the HPCR engine is much easier to successfully modify than was the original 24-vale engine. Given ongoing preparations for this summer’s Bonneville run and the excitement evidenced by the streamliner waiting its turn in the race shop, Cummins enthusiasts can look forward to exciting stuff from Banks Engineering in the future. 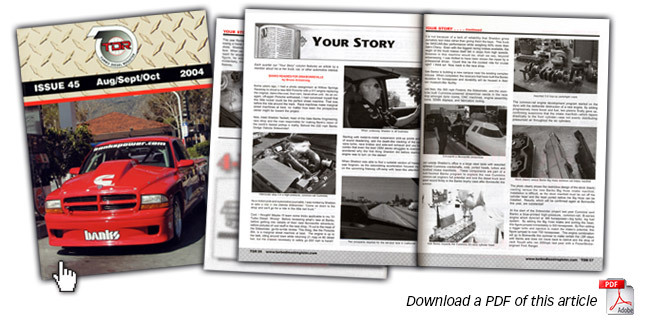