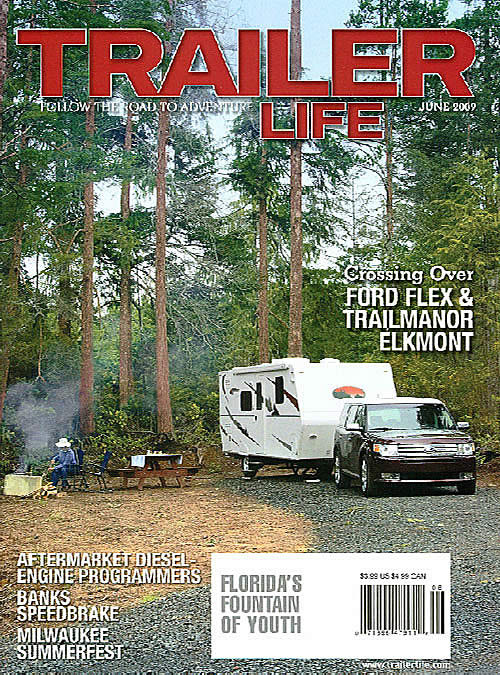 In recent years the diesel engines used in pickups have changed significantly, becoming cleaner, quieter and more powerful. Yet with all these changes, diesels still don’t provide much engine braking to help slow the vehicle. Unlike gasoline engines, diesels lack a throttle valve, so when the vehicle is decelerating there is little resistance to the load pushing against the engine’s internal resistance to turning.

This can result in some white-knuckle moments when towing a heavy trailer down a steep grade. Until now, the aftermarket responded with exhaust brakes, which use a closable restriction valve mounted in the exhaust system downstream of the turbocharger to provide more engine braking.

In the middle of the 2004 model year, GM introduced a variable geometry turbocharger (VGT) on the Duramax (LLY version) turbodiesel engine; this system allows electronic control of the vanes within the turbo, effectively increasing or decreasing the size of the exhaust outlet. The factory designed the VGT to close the turbo vanes when exhaust flow is low during initial acceleration. This results in a higher turbine speed, which creates a quicker response time, effectively reducing turbo lag.

Gale Banks Engineering utilized the capabilities of the VGT in combination with additional electronic control of the transmission to produce its new SpeedBrake, which creates a major improvement in engine-braking performance. SpeedBrake, which is designed only for 2004 and newer Chevrolet and GMC pickups with the Duramax diesel engine, is an electronic device that interfaces with the truck’s electronic control module (ECM), the transmission, the VGT and the driver through a vehicle-user interface (VUI).  When engine braking is needed, the SpeedBrake takes command of the torque-converter clutch, gear selection and vane position in the turbocharger to produce the desired braking effect. Locking the torque converter eliminates slippage, so all the braking effect produced by the engine is transferred to the drive wheels. No installation of a valve in the exhaust system is required.

These trucks come with an Allison transmission that includes a feature called Automatic Grade Braking (AGB), which monitors throttle position, brake application and speed and automatically selects a lower gear when appropriate. In stock configuration, this results in a higher engine speed and a slight increase in engine braking, but the AGB effectively does little more than provide an automated downshift and a side effect is relatively high engine speeds. GM specifications indicate the Duramax can rev to 4,800 rpm before valve float occurs; however, speeds above 3,900 rpm can be disconcerting to the driver.

With the SpeedBrake, VGT vane position can be set to achieve a desired increase in exhaust backpressure. Banks engineers designed the SpeedBrake to select the best gear without causing excessive engine revs, and chose 3,800 rpm as the maximum allowable target – well below the factory maximum.

The driver has the option of setting warning alerts if either coolant or transmission temperature exceed a preset value. A status indicator will also communicate any faults that may be detected, allowing for quick and easy troubleshooting.

Unlike traditional exhaust brakes, which are on or off, the SpeedBrake has a nearly infinite range of settings so it can be used as a downhill “cruise control.” You can input your desired speed on the VUI, and SpeedBrake maintains the target speed. SpeedBrake first locks the torque converter, then downshifts the transmission until an appropriate gear is selected. Next, the VGT vanes are closed until vehicle speed reaches the established target. Once speed has stabilized, vane angle will vary as needed to maintain vehicle speed within o. mph of its setting. Target speeds between 25 and 75 mph can be selected, or the unit may be used to provide maximum braking without a target speed.

Installation typically takes less than two hours. The electronic module is mounted in the engine compartment, and a few plug- in connections are made; there isn’t any splicing or cutting into factory wiring. The VUI mounts in a location of the driver’s preference and the OBDII system is accessed by plugging into the under-dash diagnostic connector.

The SpeedBrake can be operated in one of two modes, selectable on the VUI. The “On” mode will activate all available braking features, attempting to slow the vehicle as much as possible. This mode is available down to 15mph. The “Speed Control” mode lets the driver select a target speed and SpeedBrake will work to decelerate to that speed and then maintain it. 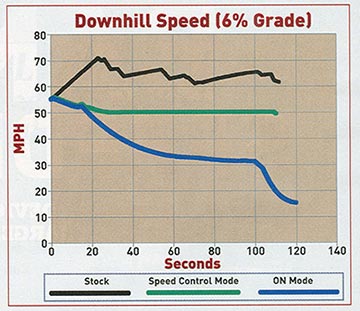 SpeedBrake can also serve as an OBDII scan tool. If a check engine light should appear on the dash, the user can utilize the SpeedBrake to read, interpret and clear any codes.

SpeedBrake also monitors slippery road conditions by comparing front and rear wheel speed. If a significant speed differential is detected, SpeedBrake will automatically disengage and notify the driver to manually apply the brakes. This safety feature is similar to the function of the factory anti-lock braking system.

In 2007, GM updated the Silverado and Sierra trucks, and a new diesel particulate filter (DPF) was added. The updated version of the Duramax engine that includes a DPF is the LMM version. According to Banks, the SpeedBrake functions seamlessly, without interruption to the DPF cleaning process on the new models.

TESTING
To evaluate the SpeedBrake, we ran a series of road tests on a 2006 Chevrolet Silverado 4×4 pickup with a Duramax engine. A location was selected in the San Gabriel Mountains of Southern California, using a section of road that includes a 6.16-percent grade that’s about 1 mile long. This closely approximates most long interstate highway grades, which are designed with maximum 6-percent gradients.

Each test was on the same stretch of road, and starting speed for each run was 55 mph. During each trial, the foot brake was not applied unless it was necessary to keep the vehicle at a safe speed.

The vehicle was towing  a trailer, bringing combined weight to 18,500 pounds. In this sequence, the tow/haul mode was activated, which also activates the Automatic Grade Braking (AGB) feature.

STOCK
The “stock” baseline test run began at 55 mph, using fifth gear. As I lifted off of the accelerator, the truck accelerated downhill. With no foot-brake application, the factory electronics allow for an upshift to sixth gear when the truck reaches 63 mph. This lowers engine rpm and allows for a greater rate of acceleration. Within less than mile, speed reached an excessive 70 mph, requiring foot-brake application. This activates the AGB, resulting in a downshift from sixth to fifth to fourth in about two seconds. With the rig slowed to 68 mph, I released the foot brake and again accelerated. In less than 1/4-mile, the truck was again at 70 mph, at which time I again applied the foot brake.

SPEEDBRAKE ON
First, the manual “On” mode (which does not provide speed control) was tested, again with an initial speed of 55 mph in fifth gear. As soon as the accelerator was released, SpeedBrake locked the torque converter clutch, then initiated a downshift sequence to third gear, bringing engine rpm to 3,400. With the turbine vanes closed to generate backpressure, within 5-1/2 seconds the truck was slowing down. By the 1/4-mile mark, the combo slowed to 50 mph and when speed dropped to 49mph the SpeedBrake determined that it was safe for a downshift to second gear, bringing engine rpm up to 3,800 rpm.

The truck continued to slow, and by the 1/4-mile mark, speed was 34mph (compared to 70 mph stock). When speed dropped to 28 mph, the SpeedBrake down-shifted to first gear, bringing engine rpm to 3,500. Speed continued to drop, clear down to 15 mph. At 15 mph in first gear, factory controls force the torque-converter clutch to unlock to avoid stalling the engine, so SpeedBrake responds by deactivating itself. As a result, the vehicle begins to slowly pick up speed. At 17 mph, the SpeedBrake reactivates, thus establishing a control cycle between 15 and 17 mph. During this entire sequence, the foot brakes were never required nor applied.

SPEED CONTROL MODE
Next we tested “Speed Control” mode with target speed set at 50 mph. As was the case while in the “On” mode, the SpeedBrake locked the torque-converter clutch, then downshifted from fifth to fourth to third, followed by full closure of the turbine vanes. When the target speed of 50 mph was reached, vane position varied to maintain 50 mph and for the remainder of the run; 50 mph was maintained within 1 mph.

BRAKING AWAY
Banks’ SpeedBrake is unlike anything offered by the factory or aftermarket, and it definitely works as claimed. It is obvious that a lot of development work went into this system. Despite its many features, the unit is easy to use, allowing the driver to concentrate on driving. During operation noise is minimal and allows normal conversation. The SpeedBrake’s design adds a margin of safety and protects the engine and wheel brakes. This will help pay for itself in reduced maintenance and wear, particularly when towing, which can be tough on brakes. Suggested retail price for the unit we tested is $1,429, complete with the VUI interface.