Dispelling the smoke about black, sooty smoke—and how to obtain maximum continuous, useable power from a diesel.

Last month, we discussed buying a turbodiesel truck for your next tow vehicle. Now we’re going to dispel some diesel myths and show you goodies from Gale Banks Engineering for ultimate power and trailer-towing capability.

First of all, diesel engines throttle with fuel–not with air, like gasoline engines. Therefore, the more fuel you push into a diesel, the more horsepower and torque the engine will make up to a point.

The biggest misconception about modern turbodiesels concerns diesel smoke. Black, sooty smoke is the byproduct of incomplete combustion in diesel engines. It’s as simple as this: With added fuel, a diesel will make more horsepower. However, unless you also add more air to supply enough oxygen to the combustion process, a lot of incompletely combusted diesel fuel (and horsepower) goes out the tailpipe as smoke.

Lots of smoke is not a good thing because it contaminates the engine’s oil at a much faster rate than normal. Here’s what happens: Modern engine oils typically contain a chemical called zinc dithiophosphate, which gives the oil its extreme pressure capability. You might call it an “anti-wear agent.” When a massive amount of smoke is present, soot invariably gets past the rings and into the oil, where it binds with the zinc dithiophosphate, disabling it. When oil loses its anti-wear agent, internal engine parts wear faster.

Well, there’s another problem, too. More fuel builds hotter exhaust gas temperatures (EGTs). This too is a bad thing. This means when you run your truck hard and EGTs climb, you may not get the extra horsepower. In cases where there is no temp limiting in place, really working a truck skyrockets EGTs, which can lead to melted pistons.

So how do you properly hop up a diesel? Gale Banks Engineering does it with knowledge gained from land speed-racing turbodiesels. Banks has been touting airflow for diesels for more than two decades, and instructs its engineers to build complete systems that not only provide more fuel, but also provide enough airflow to go along with it. Properly engineered systems make power without clouds of black smoke, plus EGTs stay at levels that don’t “temp out.”

To build continuous useable power takes an engineered system–and I don’t mean a grab-bag of parts thrown together. I mean an engineered, dyno-tested, complete system where each component works together for maximum horsepower and torque gains.

For example, Banks offers its top-of-the-line Big Hoss Bundle for the GM Duramax LLY V-8, which adds 124 hp at 3,200 rpm and a whopping 303 lb.-ft. torque at 2,000 rpm. Banks’ Big Hoss Bundle includes its Six-Gun Diesel Tuner and Speed-Loader upgrade. The Six-Gun offers six levels of power, via an adjustable knob on the dashboard. Power levels climb 20% with each click up the dial. The Speed-Loader upgrade provides additional horsepower and torque, with the added safeguard of limiting fuel delivery when exhaust temperatures reach a preset temperature (1,350 degrees on the LLY V-8). Banks tunes fuel injection pulse width, timing, and pressure. (Some tuners tune only fuel pressure or pulse width.) The advantage of tuning all three is more power without overtuning any one parameter.

Next, to reduce backpressure, Banks engineers have developed complete 4”-diameter, long-life stainless-steel Monster exhaust systems that help the engine breathe much better. Banks says it has seen gains of up to 98% reduction in backpressure with some Monster exhaust systems. Banks also has an exclusive stainless-steel Monster Muffler engineered specifically for diesel applications. Monster Mufflers have a special expansion chamber that reduces the drone common in diesels using aftermarket mufflers originally designed for gasoline applications, and a straight-through design that substantially reduces backpressure. Finally, Banks adds a 5” polished stainless-steel double-wall tailpipe tip that looks great on any truck and won’t discolor from exhaust heat.

Banks’ newest product is its Techni-Cooler charge-air cooler (CAC), which is included in the Big Hoss Bundle. Techni-Coolers are much larger than stock and made of high-quality aluminum. They have larger inlets and outlets and superior end-tank designs. Techni-Coolers reduce the temperature of the compressed air coming from the turbocharger. This cooler air charge is denser and has more oxygen to complete the combustion process, allowing for more complete combustion. Techni-Coolers help to achieve more power with less smoke and lower EGTs. 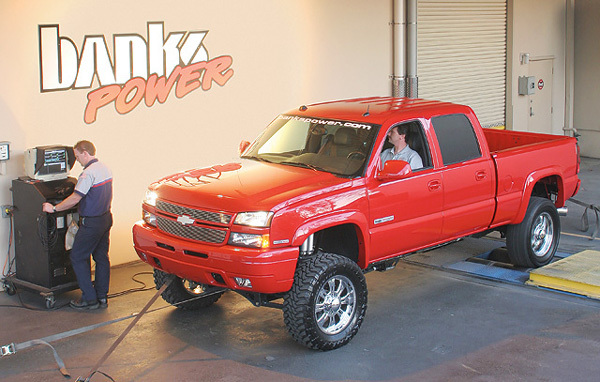 Larger boost tubes that direct air to and from the Techni-Cooler are also included. These tubes increase airflow with minimal loss of boost pressure. To put more air into the engine, a High-Ram intake is included in some applications. The High-Ram replaces the smaller stock units, to optimize airflow into the engine and increase boost without increasing turbine backpressure.

The combination of the Techni-Cooler, larger boost tubes, and High-Ram intake increases air density by up to 10%. Improvements of 25-35% more power are possible.

All Banks airflow components are available separately and can be used with any manufacturer’s computer tuner. Banks components produce more power with less smoke and lower EGTs.

Finally, Banks includes two important gauges in its Big Hoss Bundle. Banks gauges are electronic for absolute accuracy. A Dynafact pyrometer gauge monitors exhaust gas temperatures. As noted, EGTs are very important on diesels and can mean the difference between a long-lasting engine and one that has a short life.

Banks’ Dynafact boost gauge monitors power and turbocharger performance. Boost, in psi, is commonly defined as the increase above normal atmospheric pressure the turbocharger is producing.

Banks has several mounting options, including under-dash, dash-top, over the rearview mirror, and A-pillar mounts for its electronic gauges. A mechanically competent enthusiast and a friend can install a Big Hoss Bundle in a weekend.

Now imagine nearly 750 lb.-ft. of torque available from your pickup truck. This kind of power from aftermarket systems was unheard of just a few years ago. With Banks Big Hoss Bundles available for Chevy, Dodge, and Ford turbodiesels, towing your race car will feel like you’re pulling your kid’s little red wagon.