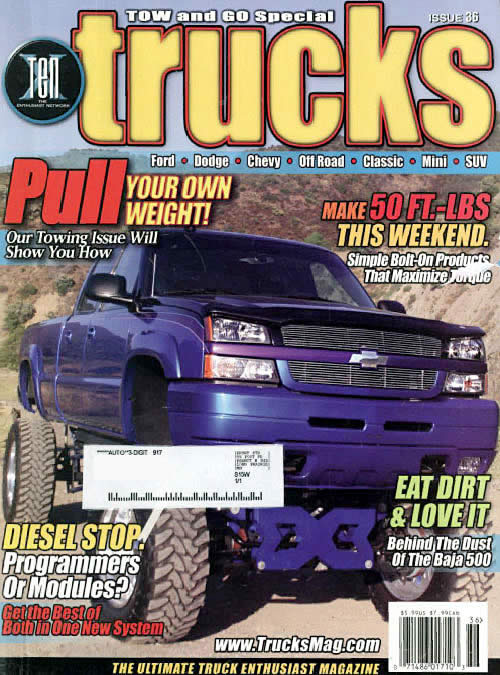 Shown is our test vehicle–a 1996 Ford F-350 dually powered by a 460-cubic-inch (7.5-liter) V-8.  Installing a Banks PowerPack® System should help its horse-toting owner, Sara Henson, on the freeways.

It seems gasoline-powered trucks haven’t gotten much attention lately. That is, since the latest generation of turbo diesel-powered trucks stole their thunder. Diesel trucks seem to be all the rage right now, but the fact is, there are millions of gasoline-powered trucks on the roads that are used for towing and heavy-duty applications. If you own one, chances are, you’d like it to have more power to tow your boat, horses, or racecar with greater ease while saving some fuel in the process. One of the best ways to do this is to upgrade the intake and exhaust system. Although Banks has been engineering power-enhancing products for diesel trucks for over twenty years, the company also has power systems for many late-model gas-powered Ford and General Motors trucks–including sport utilities.

According to Banks, its Monster Exhaust Systems typically add from 8-14 rear-wheel horsepower when installed on stock vehicles. While this might not sound like much, Banks takes pride in providing honest rear-wheel horsepower numbers derived from real testing. Furthermore, the system produces a nice mellow rumble and all of the Monster Exhaust Systems carry a lifetime-limited warranty.

This additional power is a direct result of the Ram-Air filter providing additional airflow into the engine. Secondly, the Monster Exhaust System has the capacity to flow the additional exhaust away more efficiently.

For truck owners looking for the most horsepower and torque gains possible, Banks engineered its top-of-the-line PowerPack® Systems. PowerPack Systems typically add stainless-steel TorqueTube exhaust manifolds (headers) and stainless-steel Y-pipe assemblies (again, depending on application) to all of the goodies included in its Stinger Systems. According to Banks, its PowerPack Systems produce gains of 24-77 rear-wheel horsepower, rear-wheel torque increases of 26-94 lb-ft and mileage increases from 2-15 percent.

Obviously, this is a lot of stuff to install on your truck, and we wanted to see how they work on an older Ford truck. Banks found a 1996 Ford 7.5-Liter (460 cubic-inch) F-350 duallie pickup. In testing, Banks’s engineers saw best gains of 68 rear-wheel horsepower, an 85 lb-ft increase in torque at the rear wheels and a 15-percent increase in mileage in this application.

This particular vehicle belongs to Sara Henson, who uses her Ford dually as her daily driver and also tows her three horses to shows in and around Southern California. She and her husband Bill bought the truck in 2001 as a test to see if Sara would like driving a truck everyday. They didn’t want to jump into a $50,000 truck until they knew if she even liked trucks. After putting 20,000 miles on her dually (it had 125,000 miles on it, when they bought it), Sara loved it. Her “Cowgirl Cadillac” license-plate frame is a good indicator of what she thinks about her truck.

Sara’s dually may have some miles on it (it shows 145,000 miles on the clock), but it was well taken care of. It didn’t smoke and ran well during our initial test drive. The Henson’s also had a Banks TransCommand installed on their truck while it was at Banks’s facility. Of course, this was the reason for the more positive (i.e. firmer) shifts. Banks TransCommand works in conjunction with the factory computer to sense load conditions and it increases line pressure to the transmission’s clutches accordingly – providing more positive shifts. TransCommand works especially well when towing heavy loads as it senses the heavier loads and increases line pressure accordingly taking throttle position, engine R.P.M. and miles per hour into its decision-making.

One thing we noticed after the PowerPack installation was complete, was that the truck was quiet. Even with the truck “floored” during our after installation “test drive”, the noise didn’t overpower our conversation in the cab.