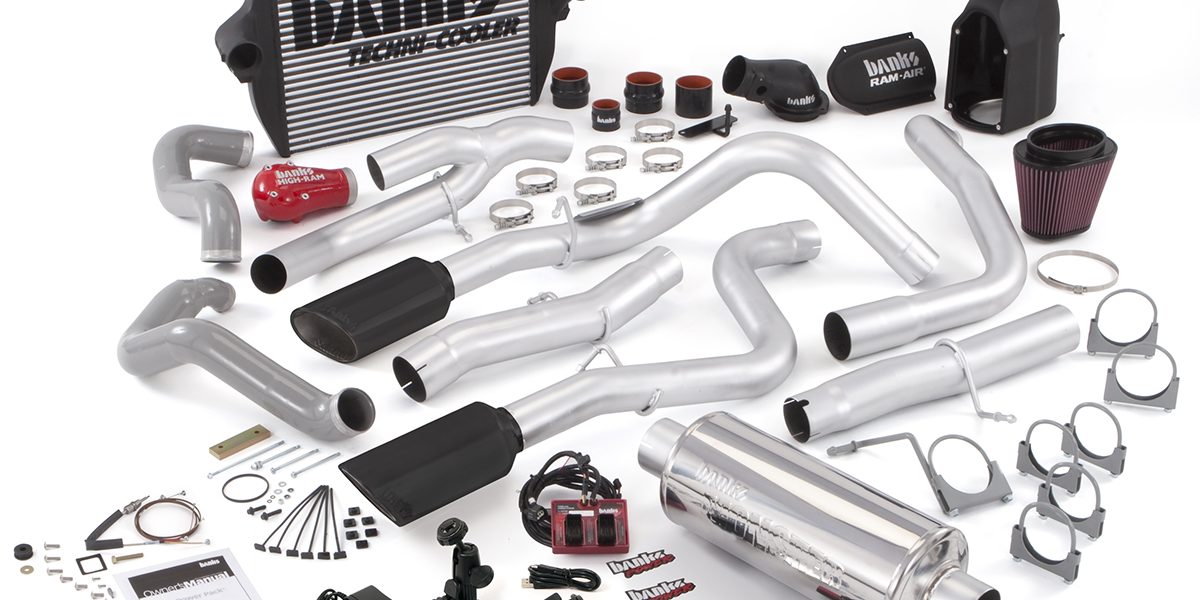 One of the great experiences of life everyone should…well…experience is the power rush of a modern-day modified diesel. Once outfitted appropriately with proper-flowing exhaust, intake, and electronics programmed for maximum fuel delivery, a diesel will have the response of a gas engine but with two or three times the torque (and the horsepower ain’t too shabby neither).  The huge power output catapults you and your 4-ton 4×4 forward like some kind of demented amusement park ride.  It seems as if the power onslaught will never stop building. After a run using just half a pedal, you end up with a silly grin plastered across your face that won’t go away.

Gale Banks Engineering is one of the most respected and experienced providers of this kind of power intoxication. Banks has been making big power with turbocharging for three decades. They have worked extensively on applications for OEMs, the military, and racing, and have set records at speed trials. They know how to make your diesel better at towing or just more fun with the best possible combination of performance and reliability.

We wanted to try out Banks’ most complete kit, the Big Hoss Bundle, on one of today’s newest diesels, the 6.0L International-sourced V-8 in a Ford Super Duty. Big Hoss Bundles are also available for the GM Duramax and Dodge Cummins engines. We aren’t showing an entire install—the instructions included in the kit from Banks are plenty detailed for just about any gearhead. Here are some tips and quarter-mile trips we worked out on an ’04 F-250. 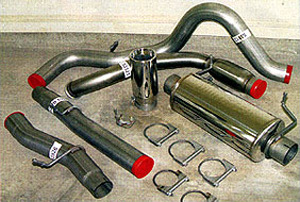 First, you don’t have to buy the entire kit all at once. The Banks kit can be bought and added in steps as funds are available. The Monster exhaust replaces the entire factory system, including Ford’s turbine outlet pipe (T.O.P.). The Banks pieces are all made of 4-inch-diameter, free-flowing, stainless steel tubing at least until you get back to the tailpipe tip, which is a massive 5-inch, double-walled, polished can. The Monster muffler is a straight-through design with an expansion chamber filled with high-temperature ceramic packing, which flows two times better than the stock Ford piece. In fact, Banks claims the entire system cuts backpressure by 73 percent, which you won’t doubt once you’ve seen the tube size and smooth bends. Here are some hints and tips to get rid of the stock exhaust and get the Banks Monster in place. 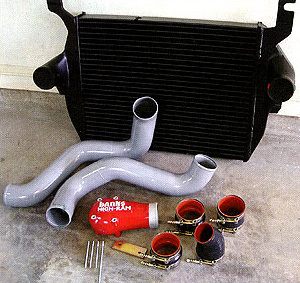 On the other end of the engine, the Banks Big Hoss Bundle opens up the congested Ford breathing. You’ve probably heard how engines are just big air pumps: Pumping more air means more fuel can be delivered and more power can be made. It’s all about the flow. Banks starts with the better-flowing intake elbow it calls a High-Ram; a new, more efficient intercooler (also referred to as a charge-air-cooler or CAC) it has named the Techni-Cooler; and finally, adds 3 ½-inch inlet and outlet boost tubes (up from Ford’s 3-inchers) for a reported 45-percent reduction in pressure drop while retaining a maximum reduction in boost temperatures. Air densities are increased. How does this work? Have you ever accidentally touched a compressor while it was running? Don’t go run out and do this. Take it from us, it’s hot and you will be burned.  When air (or any gas) is compressed (as in a turbo) it heats up. The intercooler’s job is to reduce these temperatures without letting too much pressure escape.  This has the effect of contracting the air so it becomes more dense. To wit: More air, more fuel, more power, and much more fun. 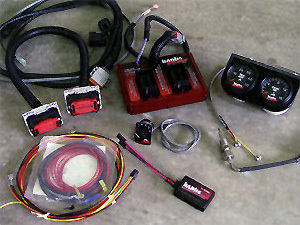 We’re not talking about Louis L’Amor westerns and Dirty Harry movies. The big ammo of the Banks Big Hoss Bundle are the high-caliber electronics rammed inside the Six-Gun Diesel Tuner and its sidearm, the inline Speed-Loader module. But enough of the firearm analogies. With airflow increases provided by the intake and exhaust mods, a minor power bump will be noticed—but to really kick it up a notch, more fuel needs to be delivered into that airflow. The Six-Gun Tuner controls all three fuel parameters; injector pulse width, timing, and fuel pressure. The Six-Gun is adjustable via a dash-mounted, six-position knob that allows the driver to dial up the power from stock to 100 percent in 20-percent increments. But what’s really great are the built-in safety systems—AutoRate and ActiveSafety. These systems allow the huge power increases, while simultaneously protecting your truck’s drivetrain. The Banks electronics actually work with the Ford electronics so that power (fuel) can be pulled back at the moment of shifting to lessen torque-loading the components. Other items such as torque-converter lockup protection, coolant temperature monitoring, and safe turbo calibration are also included. The Six-Gun is even smart enough to diagnose itself and provides automatic bypass if needed. The Speed-Loader provides additional protection by monitoring and limiting exhaust gas temperatures (EGT) to safe levels. A side benefit of the Speed-Loader protection is that even more horsepower is allowed since the module keeps close tabs on the EGT.

The Banks Big Hoss Bundle does not produce subtle power improvements—these are changes no one’s seat-of-the-pants can miss. We’re talking copious, tire-shredding, giddy-laughter-inducing, born-again kind of power. In 2WD, as the turbo comes up on the boost (which is almost instantaneous), the rear tires will break loose. If exhibition of speed isn’t your thing, you ought to feel what it’s like to pull into a passing lane going uphill, lay on a little pedal, and watch the cars disappear without even a downshift to interrupt the flow of g-forces pushing you ever deeper into the seat. Although different dynos can give you different numbers for power output, we wanted to see what kind of gains we were getting without depending too much on our backsides. We hooked up our Tesla G-Tech Pro Competition meter in our test truck and made some runs. The first thing we noted was that our G-Tech, for some reason, couldn’t pick up rpm in our diesel F-250, so we were bummed we couldn’t get torque numbers. (The unit has worked flawlessly in our gasoline-powered vehicles.) We could, however, get horsepower, elapsed times, and g-force readings. Note how the Banks Six-Gun Tuner pulls out power (arrows) at the time of each shift, dropping for just a moment close to the stock levels. Our quarter-mile times for our 4-ton truck dropped a full two seconds. That’s what we call an H.O. 6.0!