Diesel Fuel: A status report on the fuels that are available to diesel owners, and why it’s still hard to know what comes out of the pump.

Low-sulfur diesel fuel is now the norm throughout the USA, which means that many diesels are running on different fuel from what the manufacturer had in mind when the engine was designed.  Taking into account variations in properties of different crude sources, biodiesel blends, and the advent of gas-to-liquid diesel fuel, there is ample opportunity for wide variations in fuel.

Wide variations in diesel fuel quality are a fact of life in North America.  That’s a problem for every diesel owner, and especially for those who own newer diesels.  It’s actually a bigger problem than most people realize.

When companies like Cummins, IHI, Ford and GM design an engine, they build it around a certain fuel specification.  When there are variations in fuel characteristics, that can cause problems with injectors and filters, cause premature top end wear-even engine oil itself can be compromised.

Manufacturers may warranty their engines, but they sure don’t warranty the fuel. When bad fuel gets into your engine, or the wrong-spec fuel, that’s your problem. We’ll wager more warranties are voided based on fuel issues than anything else.  There have been SAE studies that show that 70 percent of filling station diesel does not meet the design standards of the manufacturers with regard to key characteristics like lubricity.

Even if these variations in fuel quality do not cause engine damage, they can easily affect mileage and performance, and cold-weather starting. 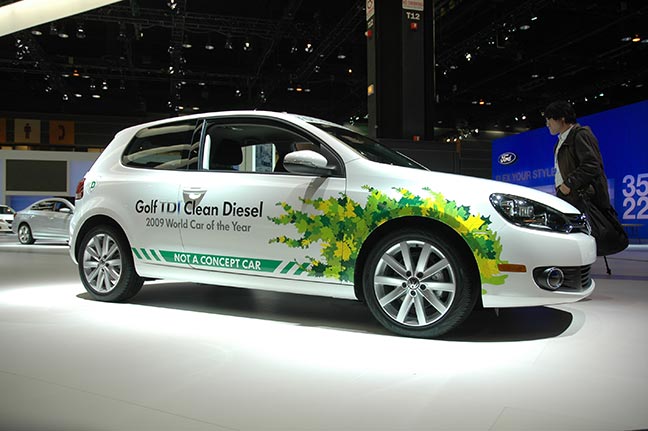 Some vehicles tolerate variations in diesel fuel blends better than others.  While the newest domestic pickups can burn B20, most European diesels run the risk of fuel dilution if they burn any blend higher than 5% bio.

It used to be said that North American diesel was the least consistent in the world, and that Europe had the best.  Now, with the advent of ultra-low-sulfur diesel (ULSD) the consensus is that our diesel is about as good as Europe’s.  The bad news is, quality is declining overall throughout the world.  There are several reasons why quality variations are built into diesel fuel, reasons that are further complicated by the advent of blending with biodiesel and gas-to-liquid diesel fuels.  Let’s take a look at a few.

Reason #1: Crude oils vary.  North Sea Brent is different from Light Sweet Crude, which is different from Canadian tar sand oil.  These oils can have different molecular structures, so they refine differently, with some lending themselves to production of a consistent grade of diesel more than others. These days, there is less flexibility to select the crude oil that might be best for a given refinery to work with.  We trade with certain partners, not with others, so we take what we can get.

Reason #2:  We ask more of our refiners. In North America, the primary fuel is gasoline, and diesel is a byproduct.  By using a process called catalytic cracking-best for producing high quality gasoline-refineries maximize their profit, but that results in a lower quality diesel.  Refiners must now also reduce sulfur content, which further complicates their production cost structure.

Reason #3: More and more, diesel fuels have become blends. Winter diesel, for example, is usually a blend that includes kerosene. The colder the weather, the more kerosene is used.  If the weather suddenly turns warmer, you still get the “winter” fuel, like it or not.

Biodiesel is another variable. Biodiesel is made from many different natural oils, each of which produces a fuel that varies in cloud point temperature, pour point, and other key characteristics.  These could be oils from animal fat, grain crops, or even algae. Fortunately, there is now an official ASTM standard for biodiesel fuel, which allows manufacturers to engineer their powerplants with reasonable certainty.  How well biodiesel producers can hit that standard spec is the issue, and realistically, biodiesel fuel characteristics may vary from producer to producer. Meanwhile, there is more of it being used than ever. 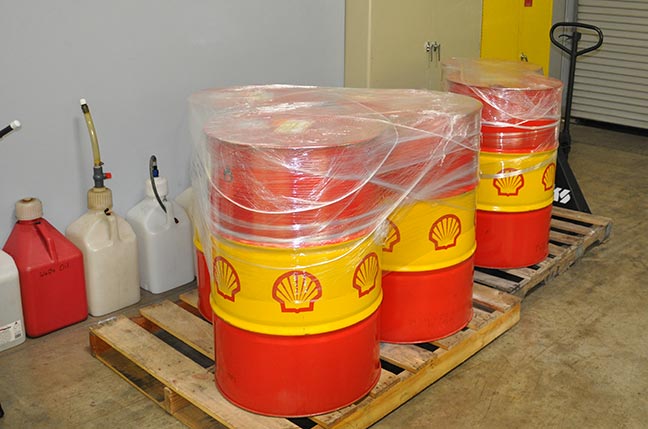 Recently delivered to the Banks Power engineering facility are two pallets of LM24, otherwise known as Shell Racing Diesel.  It’s a higher-energy diesel fuel that some high end road race diesels have been using.  We’ve never used it before, but we’ll be doing some testing to see how it works.

Currently in at least 5 states, biodiesel blends are now mandated, varying from 2% to 5%, so when you fill up in those states, you get the blend.  It is expected that more states will begin using biodiesel in their pump fuel, and mandating higher blends as time goes on. A 20% blend, known as B20, is also becoming more commonplace.  There are even stations that sell neat biodiesel, or B100. Some manufacturers, such as Ford and GM, are now offering engines that can safely tolerate B20 in their newest trucks, but most new European engines are built to burn a maximum of B5.  The difference is in their emissions control systems.  Those manufacturers that use a late burst of fuel to initiate DPF regeneration, in effect sending unburned fuel into the exhaust, are less tolerant of biodiesel. Biodiesel has slightly different combustion characteristics than regular #2 fuel, so some of it remains unburned in the cylinder and gets scraped downward into the sump by the rings. So it ends up diluting the engine oil. Use of any more than 5% biodiesel in that type of engine could compromise viscosity of the engine oil, resulting in the need for much more frequent oil changes.

Ford and GM get around that particular challenge by using an extra injector, located in the exhaust stream, to fuel their regeneration cycle, thus avoiding the risk of oil dilution. But they limit their warranty coverage to B20, because Biodiesel also has an unusual affinity for water, and can be problematic at low temperatures.  They also recognize that biodiesel can be hard to store and handle. Incidentally, biodiesel also has lower energy content, so users may experience a drop in mileage.  That said, used in appropriate concentrations, Biodiesel has many advantages, both environmental and geo-political.  On the whole, advantages seem to outweigh the risks, so diesel owners are likely to see more biodiesel at filling stations of the future.   We just have to hope it meets official quality specs. 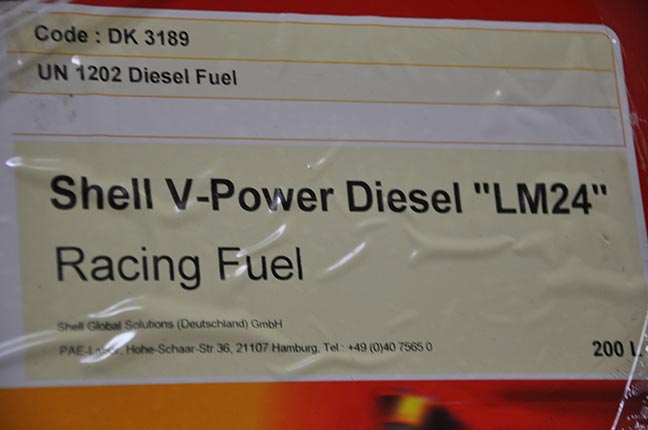 LM24 might be an intriguing fuel to try in a high-revving race diesel, but it’s probably not ideal for everyday use.  It’s clean enough, but the high cetane number translates into less mpg, and a rather high cloud point suggests it might not be ideal for low temperature use.  That, plus the fact that it costs a good $10 a gallon, tells us we won’t be running into much of it on the street.

Another diesel fuel we may see more of in the future is based on the idea of converting natural gases that refineries used to flare off into fuel.  The process, known as gas-to-liquid (GTL) results in a diesel fuel that has virtually no sulfur, with a high cetane number.  It’s not yet widely available, but because it helps refineries operate more efficiently, and provides an exceptionally clean fuel, chances are we’ll be seeing more of it. Like biodiesel, it will be blended in our fuel, but unlike biodiesel, there is as yet no official standard.  So, bottom line, GTL fuel is another blending agent that manufacturers have not designed engines to run on.

Here at Banks, we  have not done much testing on biodiesel, GTL or other fuels, but we have found test results on the internet that suggest that both biodiesel and GTL fuel  will make slightly less power, and get less mileage.  Our racing vehicles run on straight pump #2 diesel.

We do get questions about racing diesel fuel.  The truth is, we’ve never used diesel racing fuel, because we’ve never felt we needed it.  But it’s out there. When we search the internet and chat rooms, we see there is plenty of opinion and speculation, but nobody seems to have any hard data.  Which is one reason why there are now two pallets of Shell Racing Diesel (LM24) in the Banks Power engineering shop.  This fuel is billed as the “ideal modern diesel race car fuel.”   It utilizes GTL fuel as a key ingredient, and has a cetane number between 60 and 65, when most pump diesel has a cetane rating closer to 45.  Cloud point is between -3 degrees and -10 degrees C, and it has less than 10 ppm sulfur content.  It can be pricy, in the neighborhood of $10 a gallon-not exactly what you’d want for everyday use.  Does it make power?  How do you tune for it? What does it do to EGTs?  Is it worth the money?  We don’t know, but we have our suspicions.  So we are going to find out.  We’ll be doing some testing on this fuel in the coming months, to get to the bottom of the potential.  You’ll be hearing more about what we find out when those two pallets are gone.