The limited slip differential should help to plant both rear tires and give Dallenbach more drive off the turns which in turn should directly translate into more speed on the course and less time on the clock! 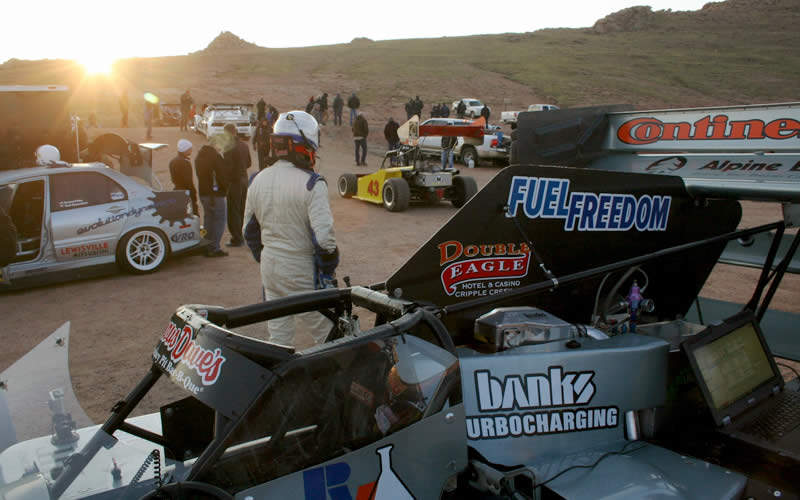 On Wednesday August 8, 2012 the Dallenbach Racing/Banks Power team made test passes through the upper 1/3 of the racecourse. Paul Dallenbach’s best time was just three seconds off the fast time of the day set by Jean Philippe Dayraut in his AWD Dacia Duster rally-style car. But, the Dallenbach/Banks car has SPEED! Dallenbach tripped the RADAR gun at 144 MPH while Frenchman Dayraut was much slower posting a speed of 136 MPH at the same location on the course.

The team felt that the open differential they were running may have been hurting the acceleration out of the corners allowing one wheel to spin under the power of the twin-turbocharged 1,400-horsepower Chevy V8. The tire spin they were experiencing combined with very bumpy pavement in the upper section of the course likely contributed to broken spider gears in the differential. A total of five teeth were broken on two of the spider gears and the debris from the damaged teeth migrated through the Lola transaxle damaging the input “drop” gears while Dallenbach was driving the car back down the mountain.

Fortunately the Dallenbach Racing/Banks Power team located a stockpile of old Indy Car parts including Lola transaxle parts near Colorado Springs and purchased two sets of drop gears as well as a limited slip differential assembly along with the tools and spare parts necessary to tune the lock-up point of the differential. So rather than the setback the broken differential would seem to be, it turned out to be a blessing in disguise. The limited slip differential should help to plant both rear tires and give Dallenbach more drive off the turns which in turn should directly translate into more speed on the course and less time on the clock!

The team mechanics plan to work in shifts through the night to rebuild and repair the transaxle and reassemble the car making sure it is ready for on-track activity first thing Thursday morning. And by first thing, we mean first thing the Dallenbach Racing/Banks Power team is scheduled to be in line on the mountain at 4:15 AM to make their one and only qualifying pass up the lower 1/3 of the mountain racecourse. Qualifying is important for the team as some teams could potentially be eliminated from the PPIHC and not making a qualifying pass or having a poor time could put you on the top of the elimination list. Additionally the top qualifier gets to choose their start time for their attack on the mountain, and with a lot of humidity and possible thunderstorms in the air, picking a good race time could mean the difference between setting a new record or being an also-ran.

Dallenbach will have to adjust his driving style and timing to adjust to the new limited slip differential putting the power to both rear wheels during his qualifying run since there will not be enough time for the team to test the car before their scheduled 4:15 AM report time on the mountain. But the team is confident and optimistic in both Dallenbach’s driving ability and the car’s potential. They look forward to taking home the top qualifying position and choice of starting time that goes with it!

As the Dallenbach Racing/Banks Power team continues its quest to bring the Unlimited Class win and PPIHC record time back to the USA they have been able to overcome problems and adapt to the conditions like the true hot-rodders they are with a never give up spirit. In that regard they have also decided to run the Continental grooved slick tires over the treaded Continental rain tires they have been running to give Dallenbach the most traction possible to put the AWD cars in the rear view mirror and down the running order on the timesheets come race day! Stay tuned here for the latest information on the team and their efforts.

An avid artist, Paul Dallenbach uses his right foot and a 1,400-horsepower Banks Power twin-turbo Chevy V8 to paint thick black Continental rubber stripes on the asphalt while practicing on the upper section of the course.