Paul Dallenbach, multiple champion at Pikes Peak, is in good condition following a crash into the forest early into his record attempt this past Sunday at the Pikes Peak international Hill Climb. 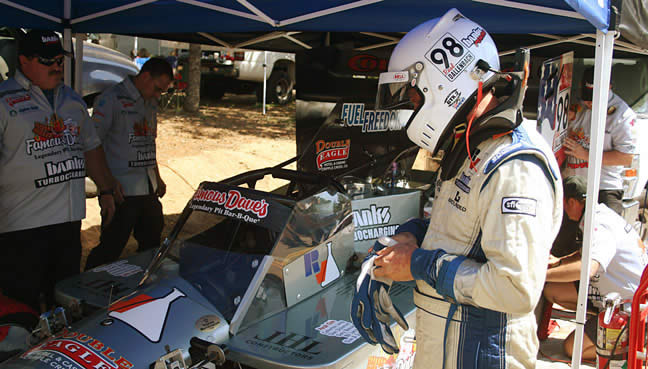 Shown above: The Dallenbach race crew checking out the race car for its record attempt.

Paul Dallenbach, multiple champion at Pikes Peak, is in good condition following a crash into the forest early into his record attempt this past Sunday at the Pikes Peak international Hill Climb. The Dacia entry from France, closest competitor to the Dallenbach Racing/Banks Power entry, had crashed shortly before. Both teams were locked in a top qualifying battle the entire week preceding the event.

On race day, Banks engineers provided Paul with a full power calibration that virtually insured the win, the Banks Turbos lit off and Paul left the starting line with a vengeance. But it was not meant to be and Paul joined the French driver, Jean Philippe Dayraut, on the sidelines.

Unfortunately, Paul cut down a number of trees before the totally destroyed race car came to rest. But, on the good side, the energy dissipated by the body work being crushed and ripped from the chassis did its job bringing the car to a stop with the drivers safety cage intact.

Gale Banks, owner of Gale Banks Engineering, quipped “The mountain won today! In my opinion, Paul Dallenbach is the best on the mountain, team owner Leonard Arnold brings decades of experience and wisdom to the crew, those guys never let up, improving the car the entire week. Pikes Peak is the most challenging and dangerous place I have ever raced and Paul Dallenbach, the bravest.”

The Dallenbach team’s naturally aspirated engine was upgraded with a Banks Sidewinder Twin Turbo package purchased before last years race. The Dallenbach crew installed the engine and handled the mechanical hook up and air ducting construction. Gale decided to support the effort immediately and advice on camshaft design was soon followed with on track support on turbo, waste gate and engine calibration. That support continued this year and we’re very proud that our tuning and altitude compensating, turbo control electronics worked even better than expected.

Gale Banks, a guy who has met adversity many times in his life, put it very simply saying… “Leonard Arnold brought Banks to Pikes Peak, I deeply appreciate that, and…I’ll be back“.

So watch this space diesel fans, Banks is talking about taking a Gale Banks Super-Turbo 427” V8 Diesel powered pickup to the mountain!

For more information on the Pike’s Peak International Hill Climb check out www.usacracing.com/ppihc and for more on the Team Dallenbach-Banks efforts go to www.bankspower.com/pikespeak