The big news this week is Bonneville, better known since 1949 as Speed Week. In fact today (Friday) is the last day of running, so I don’t really have final results. Gale went out last weekend for the opening days. Gale can’t stay away from Bonneville. He’s been competing there since the early ’60s. He has set many different records in several classes, and actually still holds two current records that have stood for more than ten years each (including what was, for a long time, the world’s fastest production-bodied car and the world’s fastest pickup).

What’s it like to run at Bonneville? You follow that black line and head for those mountains in the distance, hoping your engine doesn’t blow. On the long course, you run for five miles.

Once you get hooked on Bonneville, you’ve gotta go. And plenty do, both as competitors and as spectators. Over the years land speed racing, which began at Muroc dry lake (now Edwards Air Force base) as early as the 1920s, has waxed and waned. The Southern California Timing Association (SCTA), an aggregate of local car clubs, was formed in 1938 to organize dry lakes racing and to help improve the image of hot rodders. During WW II Muroc was closed to racing, but after the war it swelled significantly in numbers, primarily at El Mirage dry lake in the high desert northeast of Los Angeles. By 1949, through the efforts of Wally Parks of the SCTA and Robert E. Petersen and Lee O. Ryan of Hot Rod magazine, Bonneville was finally opened to the hot rodders under the auspices of the SCTA. Though some years have been rained out, they’ve been racing there annually ever since. While interest in dry lakes racing tapered off, Bonneville was big in the ’50s and ’60s. Then its ranks thinned, too, during the ’70s. There was a point when you could count competitors by dozens. But in the last ten years interest in the lakes, but even more so in Bonneville, has really swelled, both in competitors and in spectators (especially spectators driving hot rods). I was quite surprised to see that the list of cars running this past week at Bonneville was over 300.

One of the greatest things about land speed racing is the variety, and inventiveness, of the machinery running there. While contemporary drag racing has become largely formulaic these days, you’re likely to see anything you can imagine—and even some you can’t—running at Bonneville. There are classes for everything from streamliners to stock production cars, and from electric or steam-powered vehicles to diesel big rigs. And within each of these classes there’s plenty of room for creativity, both in cheating the wind and making horsepower. They used to call drag racing “ingenuity in action.” It’s more true of Bonneville today.

The other thing that truly characterizes Bonneville is its strictly amateur status. There might be a few cars that have some minimal amount of sponsorship, but you can’t win any money there. There are no purses and there are no contingencies. The vast majority of cars are sponsored by their owners, or by a team. What sponsorship there is usually consists of engine parts, fuel, or spark plugs—stuff like that.

Besides his own vehicles, Gale has been partners with Bruce Geisler on the Geisler, Vail, Banks ’53 Studebaker Blown Gas Coupe for decades, as well as with Al Teague on his legendary, multi-record-holding streamliner. That’s one big reason why Gale was at Bonneville this year. Al announced that this would be his final year running the ‘liner, which is getting rather long of tooth at this point. Going in, it held the records in AA/BFS (Blown Fuel Streamliner) at 387.635; in A/BFS (409.986); in B/BFS (381.867); and in C/BFS (366.043), using different sizes of similar Hemi engines. The A class record, set way back in 1991, was the fastest speed set by any piston-driven vehicle for more than a decade. This year Al was running in the AA/BFS class. On Monday he ran 401.124. On Tuesday he ran 405.419, which would have substantially upped the AA record (you must average two runs on two consecutive days to set a record at Bonneville). However, long-time nemesis Nolan White—the only other car in the AA/BFS (Blown Fuel Streamliner) class—managed to set a new record of 413.156 on Monday, having made a highly commendable run of 420+ on Sunday. Somebody quipped that he was cheating because he used two engines instead of one, but that’s perfectly legal in the AA class. You could use four supercharged engines if you wanted, like Mickey Thompson and the Summers Brothers did to make their 400+ runs decades ago. So, Al Teague turned in a magnificent performance at Bonneville this week. It’s just that one guy did even better. That, as they say, is racing (and whether Al really retires or not remains to be seen).

To go fast at Bonneville you must do three things. First, you’ve got to punch a hole in the wind, and a shape like this does it. Second, you have to make big horsepower; in this case nitro and a blower help. Third, you have to stick it on the ground—literally, keep the car from flying, but just as important keep the rear tires from spinning. To this end, Al recently added a small wing, for downforce, above the engine.

The body for Al’s car actually started life as a streamlined motorcycle. The streamliner class requires four wheels, so Al runs the front two one behind the other. It’s pretty tight in the narrow confines of that cockpit, even without his helmet on.

Since the earliest days of Bonneville, and even before, the big numbers have been run by streamliners running multiple engines or big many-cylinder aircraft engines. I can’t think of any other car running the speeds Al has with a single V8. Here crew-chief Charlie Hamilton makes final adjustments in the pits.

Nearly all Bonneville cars are started by a push truck. The stronger and faster your push truck, the better head start you get down the course. Al relies on a diesel Dodge Ram dually fitted, of course, with a Banks PowerPack and Monster Exhaust.

For the last few years, the two vehicles that generate the most excitement at Bonneville have been Teague’s ‘liner and Carl Heap’s “monster truck,” the Phoenix. They’re good friends and they pit side-by-side. This behemoth big rig, running in the Unlimited Diesel Truck (U/DT) class already held the record at 251, upped it to 254.450 on Tuesday, then blew the doors off to 263.487 on Thursday. Heap owns Carl’s 4×4 in Grants Pass, OR, and is a Banks dealer.

Heap’s engine is a huge 16-cylinder Detroit Diesel running four very large turbos (this is one side). This thing has to make humongous torque to push that giant brick through the air at those speeds.

Now let’s take a look at the variety of machines that compete on the salt. Since streamlining really means something at Bonneville, one of the first favorites in production bodies was the ’53 Studebaker, and it has been a staple there ever since. This is the Hart Racing Blown Gas Altered which hit 186 on Monday. Note the complete lack of sponsorship or even manufacturer’s decals.

Or how about a flamed Crosley sedan from the ’50s? This one was named Dynamic Simplicity (B-ville racers like cute, funny, or weird names), and running in J/Production, hit a best of 89 mph by Thursday.

And of course you’ve got to tow it with some sort of Crosley jeep thing. I’d call this cute, funny, and weird. Note the rusted-out Ford van behind it. That’s what happens if you visit the salt very often.

Speaking of cute, funny, and weird, this Interhouse Honda was also running J/Production and was a tick behind the Crosley at 82 mph. Little cars and little engines have always been big at Bonneville because there are classes for everything and you can still set a record, even going slow. This little car had the singular distinction of having the biggest number at Bonneville this year.

Unlike the classic belly tanks of old, this strange-looking projectile was made from some other sort of aircraft fuel tank. It was powered by a Buick V6 in the F/Gas Lakester class.

Because it doesn’t have a modified body, this Freightliner runs in the Production Diesel Truck class, rather than Unlimited.

It runs the same type of 16-cylinder Detroit Diesel as Heap’s truck, but you can get a better look at it here. It appears to be two V8s hooked together.

This person was also running in the Unlimited Diesel Truck class, claiming this was a Ford F-250, like his push truck behind him. Running a 5.9L Cummins, he wasn’t going fast enough to be worth protesting.

A really great thing about Bonneville is that anybody can come out and watch, for free. Lately more and more hot rods have been showing up, like this fun, low-buck Model A Phaeton with a nearly stock 4-banger.

This good-looking little T-bucket cruised all the way out from Oklahoma to take in Speed Week. His louvered license plate read “No Date.”

And the sunsets at the salt are surreal. The whole place is. Bye. 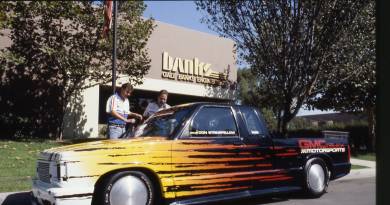 Faster Than A Syclone 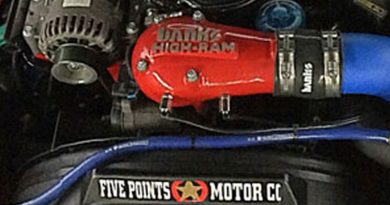 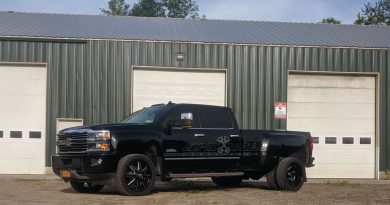