This was no feverish dream, but one hell of an adrenaline-pumping ride for two incredible days.

It all took place last spring after an invite from Gale Banks Engineering to join Hot Rod magazine’s Power Tour 2005. This event has been held once a year since 1995, crisscrossing the United States. Our run started in Milwaukee and ended eight days and 1,500 miles later in Kissimmee, Florida. More than 3,000 hot rods started the tour, but about 4,000 ended up in Kissimme

The Banks wild bunch included five extremely cool rides in the tour, starting with three new Sidewinder All-Terrain diesel trucks (one each from Dodge, Ford and Chevrolet), all outfitted with a Banks Big Hoss performance package, among other goodies. Also in the convoy was the world record-breaking, Cummins-powered Dodge Dakota (222 mph on the Bonneville Salt Flats). And there was the sleeper of the bunch, the one they called the “Rat Rod,” or “Shop Truck.” This is the tale of the Rat Rod. 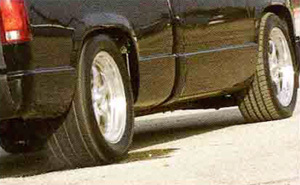 Armed with a twin-turbo small-block, the ’90 Chevrolet standard-cab shortbed SS was slammed and primered on the hood and tailgate (Banks would later add glossy paint, custom lettering, red rims, and baby moons). Most of the hot rods on the tour had a lot more flash, with testosterone showing from bumper to bumper, but not the Rat Rod. This one had its hormones hidden under the hood. Every morning, the Banks gang met in the lobby of the hotel for a drivers meeting and asked us which vehicle we would like to drive each day. We must’ve picked the right straw, because for two days we drove the most awesome sport truck anyone could ever want.

The trip included running on the back roads of Illinois, Indiana, Kentucky, and Tennessee; through the lush, green, Smoky Mountains; along winding rivers; and skirting the most beautiful valleys one could imagine. Don’t tell anybody, but more than a few times the Rat Rod exceeded the century mark. The Banks bomber wasn’t all about straight-line speed since it handled the curves of those back roads as if it was on a computerized track. The only thing left is to figure out how to get one of these bad boys for ourselves–which poses a couple of questions: How did Gale Banks create this machine and what would it take to duplicate it? 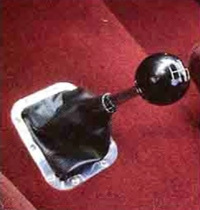 First things first: Banks started with a bone-stock, 454ci SS. Then, he yanked out the 454 and replaced it with a stout Banks built 366 cu.in. bottom end. He then bolted on a brace of turbos and a high-pressure fuel injection system. This infusion of power created a problem for the stock frame, twisting it like a pretzel behind the cab on its first outing. Dealing with that sort of problem is nothing new to Gale Banks, who has made a reputation over the years by turbocharging engines. Back in the ‘60s and ‘70s he built turbocharged marine engines, making ungodly amounts of horsepower. At that same time, he was also twin-turbo-charging the new Camaros and Firebirds. His company has been on the cutting edge of the racing scene since the late-‘50s.

Moving into the ‘80s and ‘90s, Gale found a new home among diesel engines, as witnessed with his world-record Dakota Sidewinder. Never forgetting where he came from, he has always kept his hands in the mechanics of large- and small-block GM motors. Since his early days in racing, Gale has maintained that the small-block Chevy was a prime candidate for the twin-turbo setup. Going from stock to spine-tingling supersonic street racer is almost as easy as picking up the phone and placing an order. The amount of power and G-force is only limited by the depth of your pockets. Below is a compilation of what has gone into the Rat Rod, all of which is readily available should you choose to go down this plug-and-play road.

Gale Banks has named the engine portion of this project the “Revival Twin Turbo,” setting it apart from its earlier cousin. This new engine would develop 400 more horsepower over the earlier version. Starting with 366 cubic inches, Banks added a sophisticated modern fuel injection system and ignition controls that make a calm daily driver turn into the baddest ride in town. Banks also installed an ACCEL Pro-Ram intake manifold that is CNC port-matched to the Banks/Dart heads. The fuel injection and spark management is controlled by an ACCEL digital injection system and was calibrated and sealed by Banks. Thousands of hours on the dyno and real-world testing have given Banks enough data to preset the system–with “safe” fuel and spark management–for the use of 91-octane fuel and also for the use of 100-octane fuel during maximum boost conditions. Besides the high-quality internals, Banks also has a new CNC billet aluminum serpentine belt drive system that drives a high-output alternator, the A/C compressor, a high-volume water pump, and the power steering pump. Also included with Banks’ revival twin-turbo engine is a customizable engine wiring harness, exhaust flanges, wastegate flanges, a pressure regulator, and a fuel pump. A detailed owner’s manual, installation instructions, and dyno sheets also are supplied with the package. 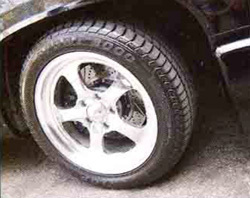 The remainder of the truck follows suit, as Gale Banks truly has a nose for clean and mean. The Rat Rod was equipped with a Richmond six-speed transmission stirred by a Long shifter. The 12-inch Centerforce billet steel flywheel is mated with a Centerforce Dual-Friction clutch and a ductile iron pressure plate. The rearend is the stock 454 SS GM 14-bolt heavy-duty version, with a Detroit Locker for traction. Speaking of hooking up, Banks added Cal Trans bars to hold things down and keep the rearend from developing axlewrap. To bring this screaming sport truck to a clenching halt, the brakes are Baer GT Plus 12.75-inch discs front and rear. The front end was dropped with Belltech Spindles modified by Baer to work with its GT Plus brakes. To give the Rat Rod a more vintage flavor, Banks later replaced the modern rims with 18-inch billet aluminum “Pseudo Steelies” by Wheel Vintiques on sticky Nitto NT 555R 305/45R18s.

After all this gear-jammin’, eye-popping fun, it turns out that there was even more power on tap than we experienced. The engineers at Banks had to detune the Rat somewhat for the Hot Rod Power Tour, so it was actually only developing a “mere” 700-plus horsepower. Rather than being disappointed by this shortfall, though, it just fired up our anticipation. Can you imagine what would have happened if they hadn’t taken those four hundred ponies and temporarily put them out to pasture? Well, that’s a performance fantasy for another day–and yet another cross-country run.