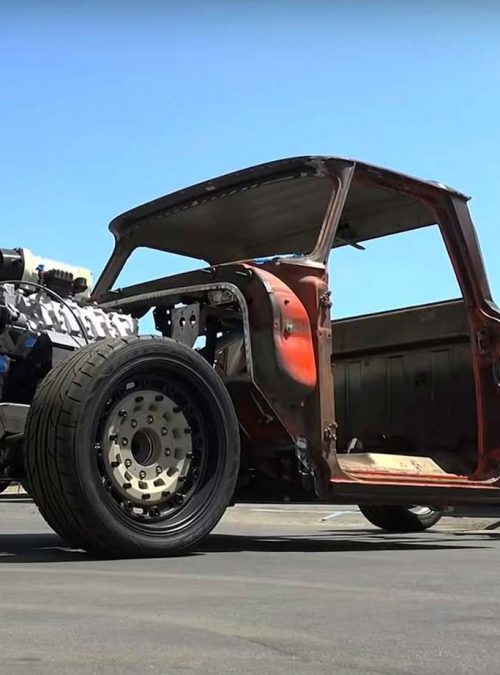 With a 3.8L Gen-5 Whipple supercharger in the mix, Banks’ L5P Duramax will be one of the most responsive diesels ever built. Not only will the blown and nitrous-fed 6.6L V-8 produce north of 700rwhp, but its four-digit torque number will be available right off idle. And as the folks at Banks have stressed throughout the course of the LokJaw build, big torque poses a serious threat to traction—especially in a two-wheel-drive application such as their ’66 C20. Thanks to a custom Spec Series C10 Roadster Shop chassis, the Chevrolet’s foundation shouldn’t have any issues coping with big torque, but the final link in the traction chain boils down to rubber. And because the decision here could make or break the entire build, Banks decided to go with Nitto tires. Here’s why.

It all started back when Gale Banks’ “shop truck” received a twin-turbo’d small-block that could never seem to find traction. After a pair of Nitto drag radials settled the half-ton Chevy down, Gale was sold on the company’s products. That confidence in Nitto tread continues to this day in the form of NT555RII’s being employed in the rear of LokJaw, as well as NT555G2’s being utilized upfront. Gale’s endorsement of Nitto tires reads as follows: “If you’ve got a bunch of power and you can’t hook up the tires, what’s the point in all the power? At the end of the day, the tires determine how well you hook up. And these things really work.”

Once upon a time, Gale Banks built this 1990 Chevy 1500 454SS with an 1,115hp, twin-turbo small-block V-8 under the hood. As you can imagine, it was a load of fun, but the truck would blow the tires off under almost any condition—until Gale switched to Nitto drag radials. Once the Nitto’s were on board, the weak link went somewhere else. During a street race, Gale downshifted the six-speed Richmond transmission, pegged the throttle, the drag radials hooked and third gear effectively became another neutral. “The Nittos hooked up and the Richmond couldn’t handle it,” he told us. Despite the damage done to the gearbox, Gale was sold on the performance capability of a Nitto drag radial.

Designed to be the ultimate street and track-friendly tire, Nitto hit the nail on the head with the NT555RII. A D.O.T.-compliant competition drag radial, the NT555RII features an enhanced, high-grip race compound for increased traction on the starting line, but along with that you get a UTQG treadwear rating of 100. This rating trumps the popular NT05R without sacrificing any of its grip. In addition to increased tread life, the NT555RII‘s large circumferential grooves aid wet handling—perfect for when you encounter a rain shower on your way home from the track.

Part of the science behind the NT555RII’s success exists in its sidewall and large tread blocks. It’s specifically designed to improve your off-the-line traction, and ultimately your 60-foot time. Furthermore, the sizable twin ribs in the center of the tire provide a continuous contact patch for consistent dry traction. Thanks to these traction aids, it’s not uncommon for streetcars to see a full second drop in quarter-mile ET’s with NT555RII’s in the mix. None of this is lost on the folks at Banks, but Gale also believes the NT555RII handles better than some give them credit for—and they have no problem accumulating miles. “They corner pretty well for drag race tires and they live quite a while on the street,” he said.

Because Banks plans to sport a custom 8-lug, 22-inch wheel on LokJaw, they’ll be running the widest available NT555RII Nitto offers. Each 305/40R22 drag radial will measure 12.32-inches wide, 31.61-inches in overall diameter and tip the scales at just 38.5 pounds. Their W speed rating also means they’re rated for 168 mph. So after the NT555RII’s take a big bite out of the pavement, they’ll support the blown L5P Duramax and six-speed Allison combination essentially until LokJaw runs out of road.

Another area where the NT555RII shines is in price. Banks’ Brand Manager, Jay Tilles, pointed out the fact that despite being just as effective as competitive drag radials, the NT555RII’s street price is considerably lower. At $350 a tire for the 305/40R22 tread used on LokJaw, comparably sized drag radials from other manufacturers are priced between $550 and $800 per tire. And while no one touches Nitto on price, Gale Banks himself doubts other tires can hook up as well, either. ”I gotta tell ya, I doubt that somebody else is gonna outperform them, regardless of price,” he told us. “If the Nittos hook up, do the job and they live—and you can drive the hell out of them on the street, why would you wanna spend more money on something else?”

While Banks went with the largest NT555RII drag radial offered, there are still 27 other sizes to choose from. A wide variety of sizes span from 15-inch wheels all the way up to the aforementioned 22’s. This means everything from old-school hot-rods to late-model muscle cars, trucks and SUV’s are supported. If you’re looking for a tire with ET-optimizing traction at the drag strip, solid performance on the street and surprising tread longevity, the NT555RII is hard to beat.

To bolster the driving experience you get with the NT555RII, Nitto specifically designed it to complement its NT555 G2 summer ultra high-performance tire. Notice that the NT555 G2 (left) also incorporates the twin center ribs, which increases straight-line stability. Its large, tapered tread blocks also provide exceptional cornering stability, which is said to outperform the original NT555 tire (i.e. the “triple nickel”). Sound water evacuation and wet handling also make the NT555 G2 the perfect partner for the NT555RII.

For parts-running duties, LokJaw may occasionally sport a Nitto Invo at each end of the Strange 9-inch in the rear. “If we don’t want to go out and get real drag-happy, we have conventional Invo’s to run on the back of it,” Gale said. But while they’re no drag radial, don’t expect the ultra high-performance Invo’s to go up in smoke in spirited driving. The Invo was designed with an outer shoulder comprised of large, reinforced tread blocks to increase the amount of surface area that contacts the road. They’re no drag radial, but they can hold their own with big power in the mix.