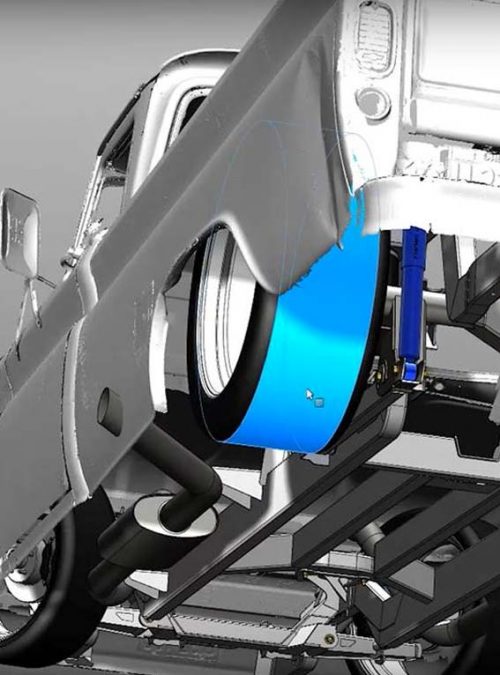 When there isn’t an aftermarket wheel available for your one-of-a-kind project, you have to improvise. When you’re Gale Banks Engineering and you’ve got a hard, November 2nd deadline, you phone an old friend and call in a favor. To meet their goals for looks, strength and aerodynamics, the folks at Banks are enlisting one of the finest custom wheel makers in the business for Project LokJaw: Sparc Industries. The small, Tyler, Texas-based specialty shop produces some of the finest functional automotive art you’ll find anywhere, namely through its steering wheels line and its one-off wheel-making capabilities.

Like a lot of the final touches that remain on Banks’ ’66 C20 project, we may not see the finished product until these wheels are revealed at SEMA. But until then, you can get a glimpse of where things are heading. Below, we’ll touch on Banks’ must-haves for the perfect set of wheels. The right offset, sound aerodynamics, high strength, openings large enough to show off the Wilwood brakes and, of course, killer aesthetics are all part of the essentials—and Sparc Industries’ Jonathan Peace is the chosen one for the job. Let the brainstorming, renderings, designing and machining begin!

Three main points of interest are driving the design of the wheels destined to grace LokJaw: 1) Functionality, 2) Openings large enough to make the Wilwood brakes visible and 3) Showcasing the fact that the truck is an 8-lug application. By functionality, the guys at Banks mean effective heat dissipation for the Wilwoods. “We need the wheel to process air and help with brake cooling,” Gale noted. The 8-lug wheels, preferably with eight spokes, need to be capable of moving air through the brake rotor.

To achieve the brake cooling functionality they were after, the guys at Banks came up with a few in-house renderings, which were anything but pretty but that helped get the point of functionality across. This version, created using SolidWorks software, resembles a turbo fan more than a road wheel. However, its design—while side-specific (as in right side, left side)—acts to pump air into the brake rotor in order to cool it. It’s definitely function over form here, and it shows. Also notice the bolt pattern, which will be the 8 on 180mm pattern employed on ’11-newer GM HD trucks.

In this example wheel rendering (again, designed at Banks), a very different design is employed. The 8-spoke version draws air from the inside while offering large windows to show off the Wilwoods. If you recall, Wilwood did much more than simply supply a big brake kit for Banks’ build. The company shared its 5-lug Pro Spindle blueprints with the chassis and fabrication experts at Kibbetech Off-road, which Kibbetech used to build the 8-lug spindles for the front-end under LokJaw. Needless to say, Banks wants to honor Wilwood as much as it can and one way of doing it is by making its brake system as noticeable as possible.

The inevitable trade-off with a truck laying frame is that turning radius is either compromised or you reduce the width of the tire and wheel package up front. Front-end limitations on LokJaw say a maximum width of 8.5-inches can be utilized. Not wanting to sacrifice maneuverability with the truck aired down, the guys at Banks plan to live within this limitation. However, the 22’s present out back can be considerably wider.

LokJaw’s rear tubs can accommodate much wider wheels, and Banks plans to utilize all of the available space back here. The plan is to go 10.5-inches in width, which will allow for a wide NT555RII drag radial to be run for a bigger bite of pavement and (hopefully) optimum traction. But, offset is everything in the rear of LokJaw. It has to be perfect or the wheels will make contact with the inside of the bed when the truck is aired down.

Why Banks Chose To Work With Sparc Industries

No stranger to Sparc Industries, Banks has worked with them in the past—most notably on this jaw-dropping T-bird build. The flawless ’55 Thunderbird build was executed by Dwayne Peace and his sons, Jonathan and Matt, and the car ended up winning a Don Ridler award back in 2012. The classic Ford convertible featured a Banks-built, twin-turbo 6.2L small-block that dealt out 1,150 hp at the crank.

Just as it does with all of its customers, Sparc Industries consulted the Banks team before any work began in an effort to go over the goals and vision for LokJaw’s custom wheels. Once a design is agreed upon, Sparc’s Jonathan Peace told the Banks crew that the one-piece wheels will be machined out of solid, 500-pound blocks of aluminum and end up at roughly 50 pounds apiece. As far as wheel design, Peace will call on his proprietary in-house software to precisely model airflow and aerodynamics, with the findings from each rendition being run by the folks at Banks before production gets the green light. The wheels will be cut using Sparc Industries’ 5-axis CNC machine.

When the custom aluminum wheels arrive via freight, the 22×10.5’s intended for the rear of LokJaw will be mounted to Nitto NT555RII drag radials. The 12.32-inch width of the 305/40R22 competition tires should provide ample footprint for the blown L5P Duramax-powered C20 to grab a sizable bite out of the road. Up front, the 22×8.5’s will be wrapped in Nitto NT555 G2 rubber measuring 265/35ZR22.