If a Lot Is Good, Even More Must Be Better—Torque, That Is

Dodge pickups with the 1998 and up 24-valve Cummins engine run strong right off the dealer’s lot, but for many that’s not a good enough reason to settle for the factory performance. Besides, as well as the new Dodge Cummins runs, it is a bit weak below 1,500 rpm. At least compared to what happens beyond that range. However, one can’t just do the customary intake, exhaust, and turbo modifications with the ISB motor. Now there are three computers on board-which is one reason for the better factory numbers-that also have to be dealt with. Needless to say, the aftermarket responded to the challenge, and as a recent visit to Gale Banks Engineering proved, so did the new 5.9L engines.

Our test mule was a 1999 Dodge 2500 pickup with an automatic trans and 4.10:1 gears. It put out a respectable 411 lb-ft of torque at 1,800 rpm and 197 hp at 2,800 on the chassis dyno. Just five years ago, those would have been great numbers for a stock diesel pickup, but whether it’s because the towed loads are getting heavier or the grades are getting longer and steeper, such “low” output doesn’t seem to cut it anymore. Unstrapping the Ram from the dyno and treating it to a complete Banks PowerPack system would surely cure the relative laziness of this beast.

Installation of a PowerPack is relatively straightforward and could likely be handled over a weekend by the mechanically gifted. Getting the Quick-Turbo turbine housing and BigHead wastegate actuator in place would take the most skill, while plumbing the 4-inch stainless exhaust system requires the most grunt. Wiring the boost and EGT gauges, replacing the intake and air filter, and plugging in the OttoMind are all simple tasks. At the Banks facilities it was all done in a matter of hours, and then the Dodge was strapped onto the 3,200 lb-ft–capacity dyno again.

For this particular test Banks also experimented with a different electronic setup. As the horsepower and torque curves show, that increased power at high rpm, but it cost us (compared to the standard PowerPack) at lower engine speeds. While the test mule’s 650 lb-ft at 1,500 rpm couldn’t beat the regular results with a PowerPack (704 at 1,700), it had more to give above 2,500 rpm than is the norm. Likewise, this tester got more than 300 hp from 2,600 rpm on, whereas prior tests had a 292hp peak at that rpm. Since Banks, as well as most diesel drivers, favors power down low in the rpm band, you can bet that this experimental setup won’t make production.

Rest assured, too, that the Banks crew will chip away at the 24-valve’s performance until one day we might say, “Oh, only 704 lb-ft and 292 hp? I remember driving one of those.” After all, the manual transmission and axles should be good for about 1,000 lb-ft. For now, after being used to driving a standard 24-valve Dodge and loving every minute of it (with the possible exception of its low-rpm performance), believe us when we say that having 700 pounds of torque at the rear tires makes an already great vehicle well over 77 percent more enjoyable. 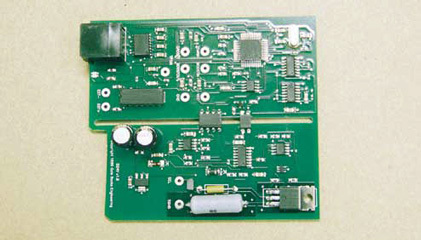 Just as in cars, the key to large, dependable performance increases on ISB engines now lies within the electronics in the vehicle. In order to keep exhaust gas temperatures and fuel curves in tune with the conventional mechanical modifications, the computer must be made to cooperate. These are the guts of a Banks OttoMind engine calibration module. 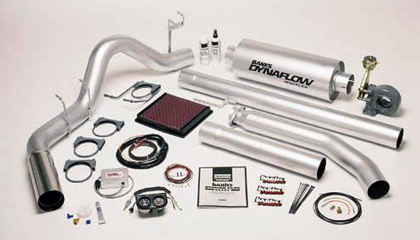 This is a Stinger-Plus system for the 24-valve Dodge. It’s about 20 hp and 40 lb-ft below the premier PowerPack on the performance scale, but some 20 hp and 77 lb-ft stronger than the regular Stinger–proving that the Quick-Turbo that’s part of the Stinger-Plus works. There’s also a new entry-level Git-Kit available, but we had no performance numbers available for that more economy-minded setup at press time. 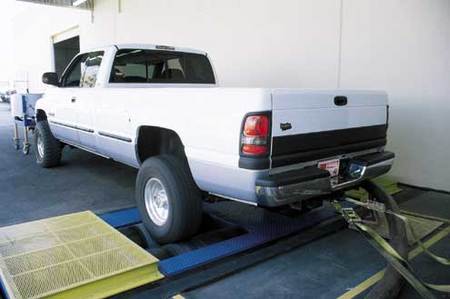 While using only 20 percent of Banks’ new dyno’s capacity, the PowerPack’d Dodge belted out an impressive 650 lb-ft at a mere 1,500 rpm. That was in Third (direct) gear with the torque converter locked. From 2,600 rpm on up, the seriously awakened Cummins put over 300 hp on the dyno’s twin 20-inch rolls. That’s more than 100 extra Clydesdales, at 200 rpm less than stock. Stout as those numbers are, they barely tickled the new Mustang dyno’s 1,500hp capacity. Two large fans pump 60-mph air into the intercooler and help the vehicle keep its cool. 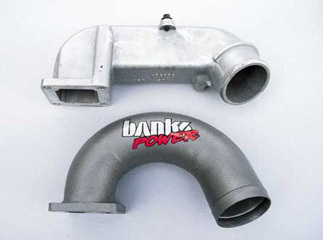 Good airflow is very important to engine efficiency, and Banks has made a much better-flowing intake pipe for the 24-valve motor. Interference with injector lines precluded using a Y-pipe design, as the TwinRam for the 12-valve motors uses, but it should be evident that the gently sweeping Banks piece flows better than the clunky factory design. 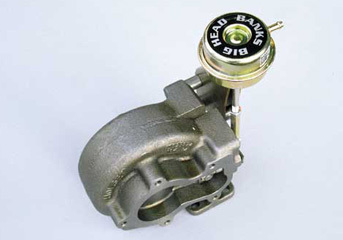 Size does matter. With a larger, lower-backpressure, quicker-reacting turbine and a better-suited wastegate actuator, boost comes on faster and stays longer. The Banks Quick-Turbo turbine housing is shown here with the BigHead actuator installed. Compared to the standard T3-style actuator, the Banks unit has twice the diaphragm area and a spring that’s twice as stiff. The result? Less wasted boost.

lso go out, and diesel engine exhaust is no exception. Good airflow is as important for the exit as for the intake tract, and much flow testing has preceded the making of parts shown here. 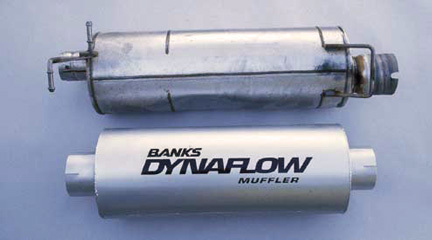 With the piping made from 4-inch mandrel-bent 409 stainless steel are the Banks turbine outlet pipe, the Dynaflow acoustically tuned muffler with ceramic packing good for 1,800 degrees, and the tailpipe.

Compared to the factory pieces above, you can see that the Banks exhaust makes a difference. Luckily, you can’t really hear it. 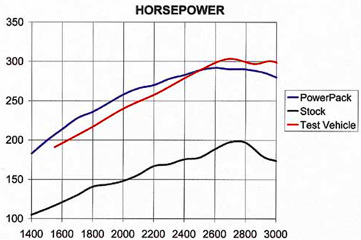 As this graph shows, no two vehicles are exactly alike, and the test vehicle (also equipped with experimental electronics) outdid the PowerPack baseline at the top end. On the other hand, there’s more usable power under the curve below 2,500 rpm with the baseline. Either way, about 100 extra horsepower are made across the scale compared to stock. 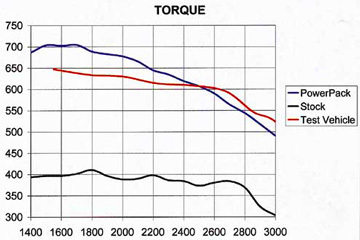 As with the horsepower curves, the experimental test vehicle exceeded the norm above 2,500 rpm but gave up valuable pulling power at lower engine speeds. Of course, if you have just some 400 lb-ft to start with, either 650 or 700 pounds of torque are a vast improvement. Since Banks favors usable torque over high-rpm numbers, the constantly upgraded engine management modules will be closer to, and made to improve on, the PowerPack’s curve.