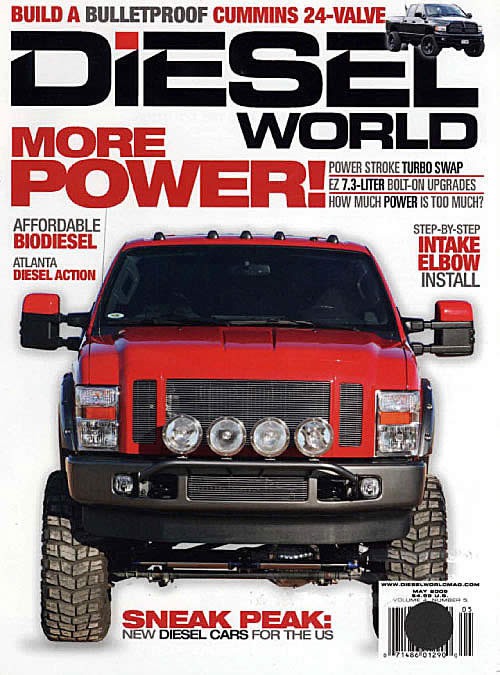 50 years of automotive and marine engineering innovation was put on display at the Wally Parks NHRA Motorsports Museum to honor Gale Banks and his achievements.

It’s called the Wally Parks NHRA Motorsports Museum. Inside this 28,500-square-foot building are some of the most important pieces in drag racing as well as motorsports history. From early sllngshot dragster to the first sport compact car to break the 200mph barrier, the evolution of drag racing is well documented in the museum through pieces of the past all brought together under one roof. Now, in the same building that pays honor to names like Don Garlits and John Force, a new name, Gale Banks, was added to the lineup.

On December 3, 2008, 50 years of automotive and marine engineering innovation was put on display at the Wally Parks NHRA Motorsports Museum, to honor Gale Banks and his achievements. The exhibit, aptly titled “Banks Power – The First 50 Years,” was kicked off with a reception hosted by Banks where some 150 guestshad a chance to preview the 3,400-square-foot exhibit.

From his admittedly humble beginnings in 1958 as a very young “engine entrepreneur” to his soon-to-be-bestowed Distinguished Service Citation from the Automotive Hall of Fame, the business life of the man whose last name is the first word on all those “Banks Power” decals, was put on public display using hundreds of photos, racing films, engineering drawings, machine shop artifacts, a 65-foot-long/200-item 1958-2008 timeline, and four actual record-breaking racing vehicles.

The four racing machines include three pickup trucks, a Chevrolet S-10, a Dodge Dakota, and a GMC Sierra. The first and second machines are literally the quickest (drag racing( and the fastest (Bonneville( diesel pickups. The Sierra has the distinction of being the first diesel road racing pickup truck. A final machine in the exhibit hall is Banks’ stock-bodied Pontiac Trans Am that sizzled over the salt at a record-busting 267.618 mph. Outside, parked prominently in front of the museum’s main entrance steps for the reception, was Banks Power’s very latest racing venture, the Sidewinder Top Diesel Dragster. 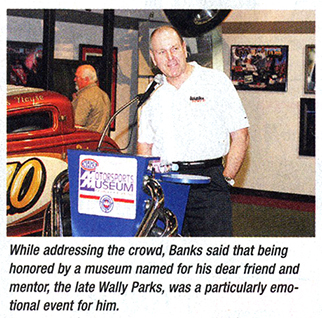 The exhibit – which opened officially to the public on December 4 – will continue through the end of September 2009. Many public events have been planned around the show’s run, and a number of other equally famous Banks racing machines will be rotated in and out of the exhibit as the months go by.

In his introduction to the media and guests, Banks thanked Museum Executive Director Tony Thacker and his staff for the great honor and indicated that he shared it with all the people who have worked with him in his company over the years. Banks then added that being honored by a museum named for his dear friend and mentor, the late Wally Parks, was a particularly emotional event for him. As previously mentioned, this very special exhibit will run through September 30, 2009, and visitors can rest assured that repeat visits will yield not only different facets of the Banks legacy, but constantly changing exhibits in the rest of the museum as well. The NHRA Wally Parks Motorsports Museum is a living, breathing tribute to all facets of motorsports and the people who’ve made racing their lives and livelihood for many decades now. 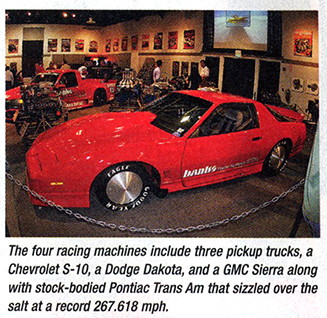