Diesel Army sits down with the mad scientist himself to find out what makes him tick.

Written By Ken Freund, Photography By Author and Banks Power

For more than half a century, Gale Banks has been making cars, trucks, and boats faster and more fuel efficient. Gale started his lifelong passion in 1956 at the young age of 14 when he modified his mother’s Model A Ford, approximately doubling the horsepower. By 1958, Gale started his first engine business in Lynwood, California, and later in San Gabriel. In the early ’60s, Gale attended Cal Poly taking mechanical and electrical engineering, emphasizing his interest as a heat power specialist.

Today, Banks Power is widely known in racing and the aftermarket speed-equipment industry, but obviously this reputation didn’t develop overnight. Over the years, Gale Banks has earned records and titles, starting in 1966 at El Mirage with a C Gas record of 184 mph in a 1953 Studebaker powered by a small-block Chevy.

In 1978 Bruce Geisler’s Banks Powered Studebaker set a world record at Bonneville averaging 217 mph. It was powered by a 955 horsepower twin-turbocharged small-block Chevy. In 1980; a Bank’s twin turbocharged ’68 Corvette upped the record to 240 mph.

Then, at Bonneville in 1986, another record was set at 260 mph in a Firebird. Again in 1987 Banks set a record at 267 mph, with a top speed of 283 mph. In the following years, Gale established or was involved in 11 world speed records. These included the Teague-Welch-Banks streamliner, world’s fastest wheel-driven automobile, with a one-way speed record of 432 mph powered by a blown Chrysler.

Starting in 1976 and for the next five years, Banks took world championships in marine racing, expanding to 12 new championships over the next 16 years. The Banks turbocharged marine engines were so successful they were actually banned in offshore racing.

In 2002 a street-legal Dodge Dakota pickup truck (pictured above) built by Banks and powered by a 735 horsepower, 1,300 lb-ft Cummins 5.9L diesel pulled its own trailer to Bonneville, getting 21 mpg and set the FIA record for “World’s Fastest Pickup Truck” with a two-way average of 217 mph and one-way top speed of 222 mph. This broke the 1990 204 mph GMC Syclone truck record previously held by Banks and GMC.

Then in 2007 the Banks “Sidewinder” S-10 pickup, driven by Wes Anderson and powered by a 1,250 horse Banks 866T V-8 diesel racing engine, became the “World’s Quickest and Fastest Diesel Drag Truck” with an NHRDA official 7.77 second ET and a top end of 180 mph in the quarter-mile (pictured below).

During his career, Banks has held the titles of World’s Fastest Passenger Car, Pickup, Diesel Drag Racing Truck and Motorhome.

Banks now has a research, development and manufacturing campus on a dozen acres in Azusa, California, with a staff of over 100. The grounds are well kept and inside the facilities look more like a hospital, thanks to Gale’s perfectionism. A major reason for his success is that he hires and nurtures the best people in their field and creates an environment that encourages innovation.

Gale showed us some of his recent developments, including viscous harmonic balancers that far outlive the stock two-piece units which fail due to rubber deterioration. Other significant product introductions include the Computer Controlled Brake in 2001, all-electronic SpeedBrake in 2009, Banks iQ in 2009, the Banks Super-Turbo marine diesel engine in 2010, in 2011, the Banks 866T V8 Turbo Diesel (2011), and in 2012 the new Banks iQ 2.0 and 630T V6 Turbo Diesel engine.

Although the truck ran better than ever, rain and sleet this year kept it from setting a record. Yet it still came within 10 seconds of the record. The Banks Racing equipment and upgrades should give Ryan has a good shot at setting a new world record in 2014.

One of the diesel projects Banks took on several years ago was requested by the U.S. military, to increase the power of combat Humvees, which have become extremely heavy due to the addition of heavy armor and weaponry, and as a result are underpowered. His task was to significantly boost power, braking, high-altitude capability and fuel economy.

What Trends Have Faded And which Ones Have Lasted?

Banks shared that he was involved in experiments with high temperature, extreme high pressure diesel fuel injection to improve atomization. Better atomization can potentially get more power out of the fuel and result in better fuel economy.

More complete combustion can also reduce the emission of particulates (soot particles) and other nasty exhaust pollutants. However, the results have not been as promising as expected and he found that high temperatures result in buildup of injector deposits. He has curtailed his research on this for now and has moved his research to ultra-high pressures in excess of 42,000 psi.

He also shared his thoughts on future fuels, such as hydrogen, and noted that for fuels to truly be successful, they need to be scaled to demand and competitively priced. Government subsidies are not sustainable and smart. Hydrogen, given current processes, requires a tremendous amount of electrical energy to separate the gas from water, and storage and transport is very costly and fraught with difficulties. 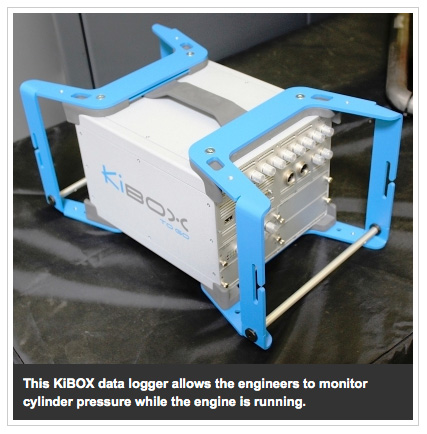 Gale Banks still has a head full of ideas and hopes to follow up on them. He showed off a brand new high tech KIBOX by Kistler in Germany. It’s a compact portable unit which measures cylinder pressures on every cylinder every ¼ of a degree of crankshaft revolution, even at maximum rpm.

It will allow Banks engineers to optimize engines for alternate fuels by watching the fuel burn rate in the cylinders, then create specific fuel and timing maps for each fuel, rather than just detuning the engines to run on the lowest grade as has been done before.

He’s looking at ways to recover some of the wasted heat energy given off by engines. This includes using thermoelectric generation and/or exhaust-driven turbine alternators, using this electrical power to drive accessories such as pumps for coolant, oil, power steering, etc. instead of belt, chain or gear-driven pumps.

Banks is also looking into removal of camshafts and using electronically controlled solenoids or other devices to open and close valves. This would greatly reduce mechanical friction, and allow almost infinite variability to valve timing at various speeds and loads, which could lead to more power, better fuel economy and lower emissions.

Gale Banks is studying the merits of various future fuels, and additives to diesel fuels. He has already introduced a water-methanol system for diesels which makes more power and reduces emissions. Banks also wants to develop hybrid vehicles using diesels, which can exploit the higher potential fuel economy of diesels relative to gasoline engines. Additionally, he’s interested in exploiting natural gas, which is now in plentiful supply at reasonable prices and can also be converted to other fuels.

One final project Gale shared with me was the conversion of over-the-road semi tractor trucks, replacing their massively heavy, slow-revving “stone-age” diesels with modern lightweight V-8 diesels that have been modified to produce equal power when needed. Banks has worked out reliability issues and designed and built a gear-reduction box that goes on the back of his V-8 engines to let them mate up with the existing transmissions and work with the gearing.

The Banks diesel V-8 has less internal friction and is more fuel efficient. Approximately a ton of weight is trimmed off the truck, which can be used instead for hauling paying freight. This engine conversion also has less heat rejection and can use a smaller radiator, which further reduces weight and allows for a smaller frontal area, opening up aerodynamic improvements as well. This, plus some innovative engine management electronics, promise sizable increases in fleet fuel economy.

Although Gale Banks, who is president of his company, recently hit 70, he still works hard and remains vigorously at the helm. He is a futurist and stays on top of technology as it advances, and as always, you can expect to see many more innovations in the coming years. 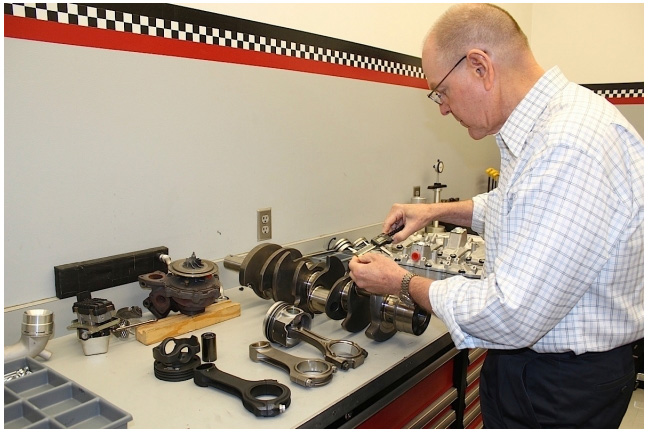