Gauges quantify temperatures, speeds and pressures to reveal what part of a powertrain may be in jeopardy, help tune for power, and get better mileage. Unfortunately, even the newest cars and trucks tend to have inadequate instrumentation, or gauges that function as idiot lights. 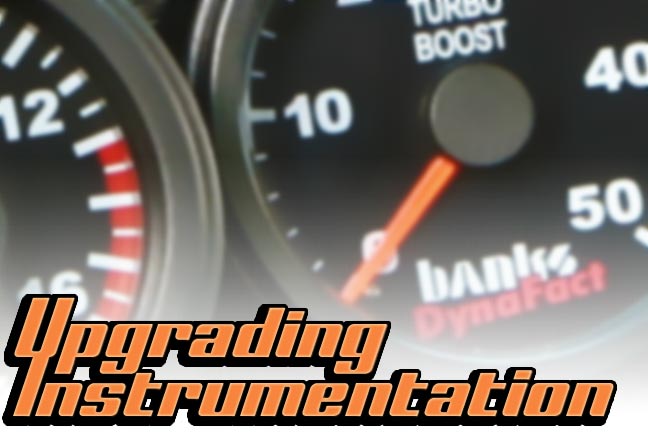 Gauges protect your investment. They quantify temperatures, speeds and pressures to reveal what part of a powertrain may be in jeopardy, help tune for power, and get better mileage.

Other than that, you don’t need them at all.

Unfortunately, even the newest cars and trucks tend to have inadequate instrumentation, or gauges that function as idiot lights. For that reason, many diesel owners, and especially diesel performance enthusiasts, are quick to upgrade. An ideal gauge package would include engine oil temp, transmission fluid temp, boost, and the all-important exhaust gas temperature (EGT). Each can tell you when something bad is about to happen, and can provide interesting insights that let a truck owner intelligently tune for power–or drive for better economy.  Here are summaries of the types of gauges commonly used, and what they can do for you. 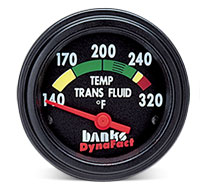 Why: It’s always possible to make more power, but once you have it, keeping the transmission alive can become the challenge, especially when your truck hauls or tows heavy loads. Overcooled ATF is sometimes a problem in cold climates, but for most of us, heat will be the killer. By adding an appropriate cooler, it’s usually possible to control heat and maintain fluid integrity. But before you do that, you need to know what kind of temperatures you are up against.

What You Want to See: For most automatic transmissions the ideal operating temperature will range between 175º and 225º F. At about 240º, additives in the ATF begin to cook out of the fluid and varnish the transmission. Internal transmission seals begin to harden at about 260º, creating leaks. At 295º F, the fluid has lost enough viscosity to allow clutch plates to slip, and at 315º F., the clutches burn out, fluid carbonizes, rendering the transmission useless.  It is said that a typical transmission will burn down within 2000 miles once fluid temps reach 300 degrees.

About the install: As with many gauges, it’s the location of the sender that determines the range of temperatures you will see. Transmission oil temperature is most appropriately observed at its hottest point. This is commonly found in the transmission fluid pan, so by installing the sender in the pan, you will get readings that are most meaningful and less subject to spikes. Stock transmission pans may not provide a location for installing a sensor, so it will be necessary to weld a bung into the pan to measure the temperature. That means dropping the pan and for most of us, sending it out to a welder. Alternate locations for the temperature sender, such as the fluid return line, are sometimes used but may end up sending temperatures that won’t reveal maximum temps the transmission fluid is being subjected to. 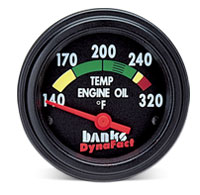 Why: In the case of engine oil, once again, heat destroys lubricating properties, touching off a cascade of failures. These might include head warpage and premature engine bearing wear. Vehicles that get heavy use should keep an eye on oil temperature, to monitor heat control when working hard. Perhaps equally important is lubricant warm-up in cold climates.

What You Want To See: Recommended oil temperatures vary somewhat according to the particular oil used. Synthetics can take more heat and still retain their lubricating properties, but the often-quoted rule of thumb is that 240º F is about the maximum temp before oil starts to varnish engine internals. If you’re seeing temperatures, measured from the oil pan, much over 220º or 230º F., that would indicate a need to check how it is being cooled. Too much cooling leads to oil that never warms up properly, which contributes to power losses and internal sludge buildup. Water boils at 212º F. (sea level) so if your oil never gets that hot, traces of water could more easily remain in solution to compromise engine oil lubrication. If you see that the oil never reaches that ideal operating temperature, you may be using the wrong oil for the season, or have too much cooling in place.

About the install: The recommended location for placing the sender will vary by engine. Usually there is a convenient location to mount the sender using a capped NTP plug in the block somewhere near the oil filter, or in some cases, simply by replacing the oil drain plug with a sender-equipped plug. 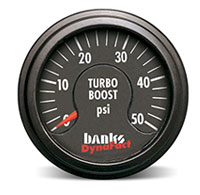 Why: Especially in the case of a modified turbocharger system, looking at boost becomes an extraordinarily helpful way to monitor the health of an engine. Most turbocharged trucks and cars (imports too) don’t have a factory boost gauge, and even if they do, that won’t cut it. The OE gauge is probably not going to be accurate to begin with, and will be even more inaccurate when you start making modifications, so replacing it with a real gauge that reads out in psi in the appropriate range is a smart move. With a real gauge, you can target ideal boost settings and tune appropriately.

What You Want To See:  Regardless of the amount of boost you are running, look for minimal or no boost at idle, positive boost in real time as throttle is opened, ending at the safe level controlled by your wastegate. The gauge should be telling you how boost develops across the rev range, which in turn will be a reflection of conditions at your intake system, your exhaust system, and the turbo itself. If you are not getting enough boost, overfueling could occur, which would show up as higher EGT and increased smoke. If you see a drop in boost, that might mean that there is a problem with the turbo, but before you replace it, check for simple causes.  Loss of boost might be due to an air leak somewhere in the intake, a missing or failed gasket, or a clogged or failed air filter.

Too much boost could indicate a malfunctioning wastegate and create lean air/fuel conditions and/or overstress the air filter, intake hoses, or other air-flow ducting.

The Install: A mechanical boost gauge usually draws input by tapping into the pressure chamber, or by T-ing a plastic line into a rubber line that connects the intake manifold to the factory pressure sensor. The line can then be routed through the firewall to the gauge. 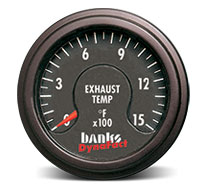 Why: EGT is an indication of how hot the combustion process is in the cylinders, and the amount of “afterburning” that is occurring in the exhaust manifold. EGT is also directly related to the air/fuel ratio. The richer the air/fuel ratio in a diesel, the higher the EGT will be. Two things can create a rich mixture under heavy loads or at full throttle: the first is too much fuel, and the second is not enough air.

The Install: The pyrometer sensing probe is usually mounted in the exhaust manifold or immediately after the turbine outlet of the turbocharger. The purpose is to measure and display EGT in degrees Fahrenheit (º F.). Where the probe is positioned before the turbine section of the turbocharger, the EGT may also be called the turbine inlet temperature. EGT measured after the turbo is called turbine outlet temperature. Both of these methods are accurate if done properly but will commonly differ by as much as 300º F on the same engine.   Some mechanics don’t like to install the thermocouple in the exhaust manifold for fear that drilling will generate metal chips that get into the turbocharger and damage the turbo compressor wheel.

Here at Banks, we prefer to locate the probe before the turbo, which reveals the higher, more accurate temperature. Risk of downstream damage can be avoided by stuffing a clean shop rag four or five inches into the exhaust manifold through the turbo mounting flange to block chips.  After drilling, remove the chips with a shop vac, small brush or fingertips, and then remove the rag using a coat hanger bent into a hook.

What You Want to See: The pyrometer should react quickly, building to a maximum when pulling a heavy load, sustaining high speeds, climbing long grades, etc. If everything is working properly, 1100º to 1300º F. can be a safe turbine inlet temperature, even for sustained running. Above 1300º F. things start to get edgy, even on a stout, EGT-tolerant engine like a Cummins.  Over 1400º F., it’s only a matter of time until damage begins to accumulate. The higher the EGT, the shorter that time will be. There are some exceptions to the above EGT limits if the driver is willing to trade off some risk of engine damage for brief spurts of maximum power or performance, such as for a quick burst of acceleration, a drag race, or even a truck pull event. And there are some engines that we are aware of that really don’t want to see anything over 1100 F. for very long.

Under sustained excessive EGT, turbo vane tips start to degrade, or even drive the turbocharger into an overspeed condition that may burst either the turbine wheel or compressor wheel. If the turbo doesn’t go first, excessive EGT, if sustained, will damage the pistons. Piston damage can take out a turbo as the hot aluminum goes through the turbo, coating the turbine wheel and housing. Such damage can include piston deformation, melting, burning, holes, cracking, etc. This damage is cumulative, so if you slightly burn a piston top, the engine may continue to run without problems, but the next time you run excessive EGT more damage may be done, and so on, until failure occurs.  Excessive EGT is so ruinous that at Banks, we were the first to engineer safeguards into our tuners to make sure that when EGT get out of hand, fuel is automatically adjusted accordingly before damage occurs. Longer term, high EGT should be considered an indication that you are wasting fuel by overfueling. That’s why an EGT gauge can be used as a mileage feedback indicator. When EGTs are low, you are getting better mileage.

To be useful, a gauge needs to be visible.  It should have clearly demarked scales and needles, be well lighted, and be mounted where it can be checked at a glance.  In addition, it should cover an appropriate range of temperatures or pressures. Digital displays have their advantages, as do classic round meters. In the end, whether you use round meters or more sophisticated digital displays is a matter of preference.  Banks Power offers both.

Our DynaFact line of gauges includes Boost (0- 50 psi or 0-15 psi), Trans Oil and Engine Oil Temperature (140 to 320º F.), and EGT, which is accurate to within 15º F., comes with a 2000-degree chromel-alumel thermocouple wire for superior conductivity. Gauges are offered singly and as assemblies. Dials are easy to read with red needles and white numerals against a black or color coded background. They come with a 2-year warranty. Some gauge assemblies can be electronically controlled, an advantage in certain applications. 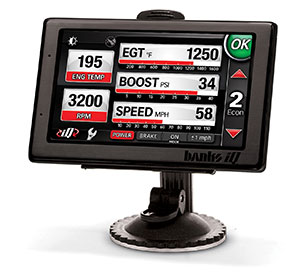 The Banks iQ is really a dash-mounted PC, something like an iPhone for your truck. With 64 MB of flash memory, it is a testing device and custom performance tuner that reads Microsoft documents, among other things. Used as a gauge, an advantage of a digital display like the iQ is that you can customize the view using a practically unlimited number of screen configurations. In short, the Banks iQ is the most advanced way to handle anything that can be computer controlled, or displayed on a screen.