Bad weather plagued the National Hot Rod Diesel Association’s World Finals last weekend in Topeka, Kansas, holding down attendance and limiting track time.  But in the end, spectators got to see a diesel pickup run at a world record pace. 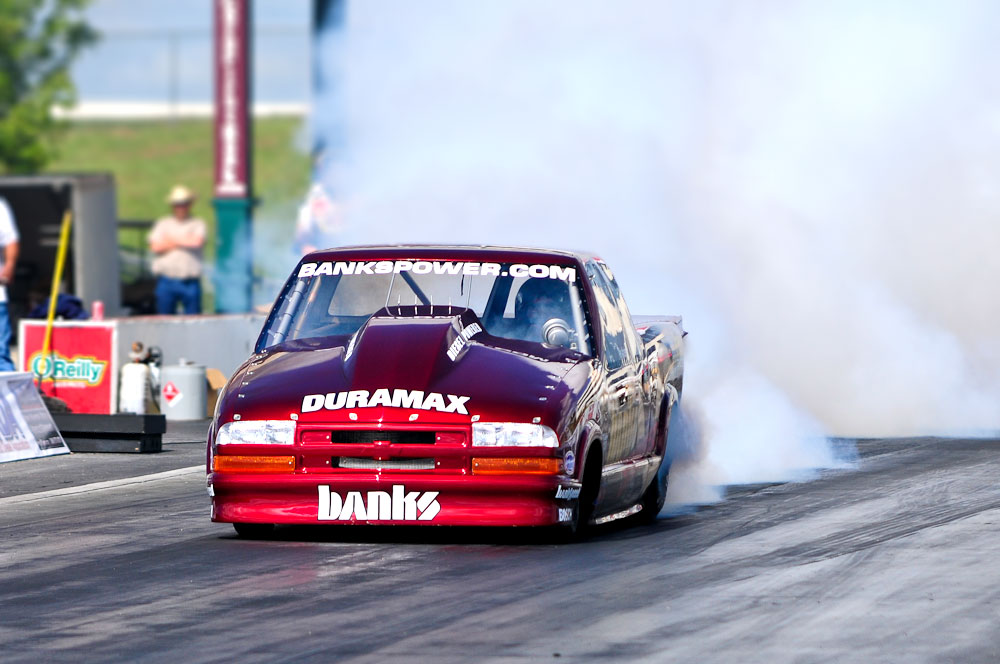 Gale Banks took his record-setting Sidewinder S-10 off the NHRA museum floor where it had been on display, dusted it off, and brought it out to Topeka with an eye to competing in the NHRDA’s finale event September 24.  At Topeka, the Banks Sidewinder S10 team planned to race in the Pro Stock Diesel class, but the team also entered the Top Diesel class thinking it might provide a chance to get in more runs. The concern was that multiple shakedown runs would be necessary, since the S-10 had been sitting for over a year. The truck had not run since March of 2009, when it set the NHRDA Pro Stock Diesel record time of 7.77 seconds, running 180.00 mph. The engine had been started up, idled, and revved a bit in the shop prior to loading it on the truck for Topeka, but that was about it.

On the track Saturday, the first single full pass revealed a transmission torque converter problem. The issue was promptly corrected, but by then, weather prevented a second pass at full power.  As a result, qualifying concluded without the Banks team having a chance to sort out much of anything.

The next opportunity for a pass came at 12:34 pm during first round of eliminations for Pro Stock diesel. This time the Banks team was disappointed when fuel delivery gremlins left the twin-turbo Duramax with irregular power delivery.  During his burnout, driver Wes Anderson sensed the S-10 was not right, but rather than disappoint the crowd the team elected to re-boot the ECU on the fly, and attempt a run. The fuel pumps never came back up, and the truck ran out of fuel shortly after passing the starting line, coasting the last 1000 feet.   It was a simple but costly mistake. The time of 11.6 at 84 mph eliminated the S-10 Sidewinder from Pro Stock diesel.

“We beat ourselves in Pro Stock Diesel,” Banks explained.  “That’s not what we had in mind…but then, that’s racing. So we went back to the pits and got the problem fixed. ”

The Sidewinder S-10 was designed to compete in Pro Stock class, rather than Top Diesel, although it is undeniably competitive in both classes.  For that reason, the team elected to take on the big boys in Top Diesel, where anything goes. 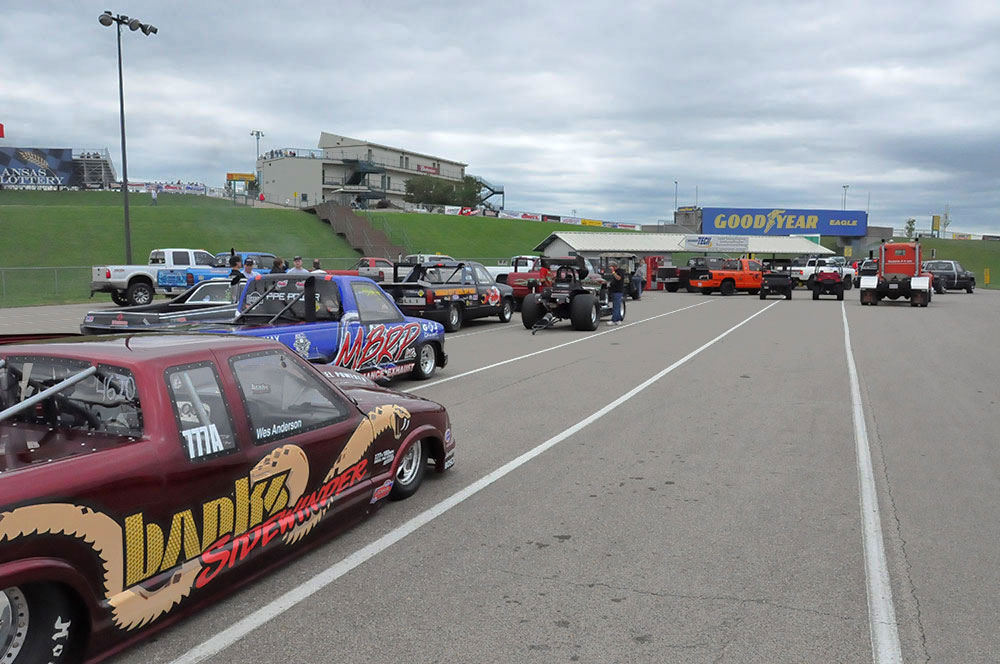 Just about any diesel-powered vehicle can run in the Top Diesel Class at NHRDA events.  We entered our Sidewinder S-10 and ended up running against a Cummins-powered Altered dragster, winning with a 7.77/177mph pass.

Most entrants in Top Diesel are dragsters and rails; the Sidewinder S-10 was the only entrant with doors.  At 1:37 pm, matched up against Ryan Tucker’s 12-valve Cummins altered dragster “Bone Shaker”, driver Wes Anderson clicked off a 7.77-second pass, launching smooth and running clean as a whistle, to win the Top Diesel prize money.  Coincidentally, the time was exactly identical to Banks own standing NHRDA Pro Stock record the truck set the last time the car ran, in March of 2009 at the NHRDA Desert Diesel nationals in Wittmann, AZ.  Top speed, at 177.6 mph, was under the prior best top speed, due primarily to shorter tires and relatively poor air density.  Even so, the S-10 was by far the quickest and fastest racer to compete that weekend. 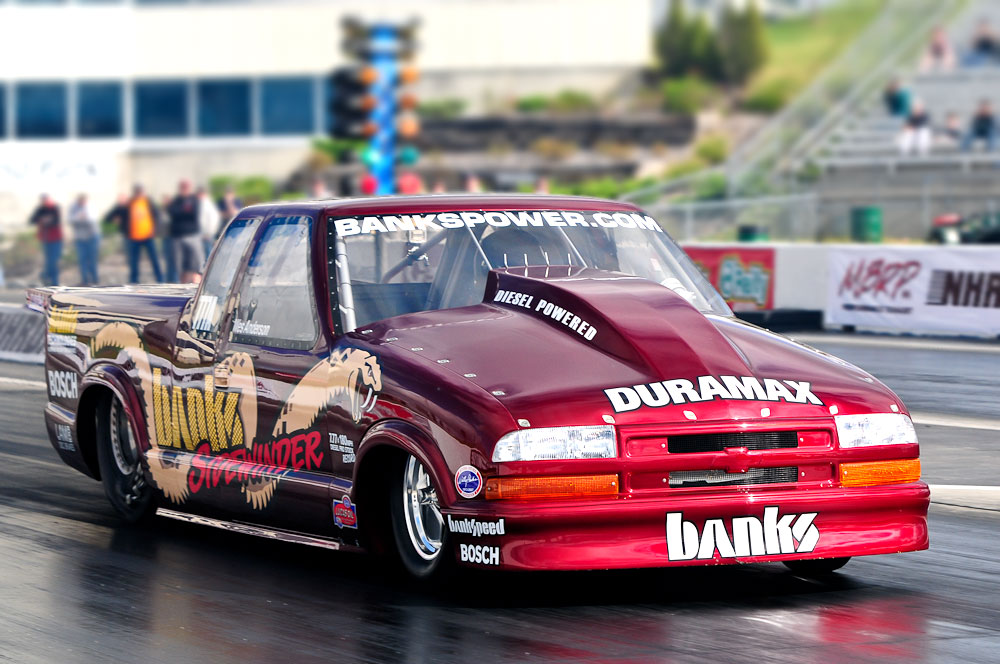 The Banks Sidewinder is powered by a twin-turbo Duramax that uses both nitrous oxide and water-methanol injection. The dry-sump engine features a stock Duramax block and stock crank, with Banks CNC-ported heads and Banks-spec cam, injectors, and manifolds. Engine management is via a Banks Motorsports ECU. With this equipment the engine turns 5800 rpm and makes over 1200 hp. Power flows to Hoosier slicks through a manually-shifted 5-speed Liberty Extreme Pro Stock-style transmission. Wheels are made by American Racing; suspension and brakes are from Lamb Components.

Although the weather did not cooperate, the consensus was that the NHRDA did a fine job organizing the World Finals.  The Banks Racing team hopes to be back next year, with both the S-10 and the Top Diesel Dragster running in their proper classes.