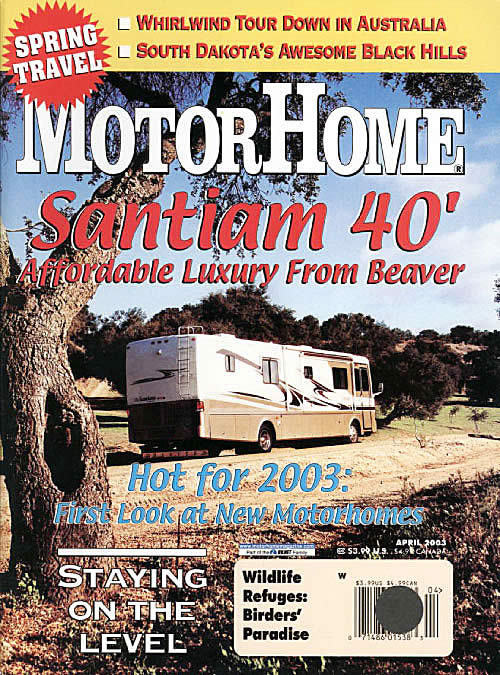 It would seem no matter how much horsepower and torque the diesel engine manufacturers provide for motorhome owners, it’s never quite enough to satisfy that all-American desire for more. The new Gale Banks Engineering PowerPack kit for the Cummins ISC 8.3-liter diesel engine can give your engine a boost to create more driving excitement and performance.

The Banks power systems for the Cummins ISC are offered in two stages. PowerPack ($2,995, plus installation) is Banks’ state-of-the-art system. It can increase the power in a stock 350 hp-rated 8.3-liter Cummins ISC diesel up to a calculated 431 hp measured at the flywheel or, in the real world, from 279 hp up to 345 hp at the drive wheels. The Stinger ($2,595, plus installation), Banks’ lower-cost alternative offering, can raise the deliverable horsepower to 405 at the flywheel, according to the company.

Both systems are designed to work with 1998 to 2000 coaches built on the Roadmaster and Spartan chassis powered by the reliable Cummins ISC. The systems include engine boost and exhaust-gas temperature instrumentation, a Banks OttoMind fuel controller and a BigHead wastegate actuator. Incorporated into the instrumentation and OttoMind software is built-in protection that monitors critical engine temperatures to preclude over fueling, a condition that can lead to catastrophic engine damage. The BigHead actuator assists in developing large boost numbers, which substantially enhance low end torque and higher peak boost without permitting an “overboost” condition in the engine. The PowerPack system adds the Banks Quick-Turbo turbine housing and offers an optional low-restriction exhaust system. The Quick-Turbo turbine housing is the key element to the elimination of the sluggish throttle response commonly associated with diesel-engine performance, according to Banks.

We’ve closely observed the development of the PowerPack kit at the Banks facility. For seven months, we participated in logging more than 700 miles on the dynamometer rollers, as well as 5,000 miles of road-testing. The process included trying many combinations of fuel-calibration programs and turbocharger-wastegate actuators, as well as turbocharger housings. Each time a part was changed, the entire test protocol was repeated and recorded.

We started with a 2001 Monaco Windsor equipped with a Cummins ISC 8.3 engine rated at 350 hp at 2,000 rpm and 1,050 lb-ft of torque at 1,500 rpm (at the flywheel). The test coach was fitted with 17 separate instruments and weighed on a certified scale. Baseline runs were made on a Mustang 750 chassis dynamometer.

The dyno runs performed at the Banks facility were not simple wide-open throttle runs to obtain maximum horsepower. Banks uses a step test as part of its established test protocol. Step-testing gives meaningful horsepower and torque figures at a given rpm. A step test is accomplished by locking the transmission in direct drive and bringing the engine to full throttle. Using the dyno’s computer control, the dyno places increased loads on the engine at preselected rpm levels. This worked much like driving your coach up a steadily increasing grade without downshifting to keep the engine in its “sweet spot”. The result provides power measurements throughout the rpm range, under a given load, providing a more accurate representation of how the engine performs in a real driving situation. However, like most dyno-testing, this does not take into account wind resistance, which increases exponentially, or rolling resistance from the front and tag axles.

Using the step-test method described above, we recorded 279 hp at 1,982 rpm and 867 lb-ft of torque at 1,378 rpm at the drive wheels. Assuming the engine is capable of the ratings advertised by the manufacturer and mentioned above, the chassis dynamometer’s data indicates that there is approximately a 20-percent parasitic loss in the driveline of this vehicle, which is not unusual. The baseline data also established peak manifold pressure (turbo boost) of 24 psi at 2,164 rpm.

Another critical element of data we recorded was the monitoring of exhaust-gas temperature (EGT), which is important when enhancing the fuel delivery of any diesel engine. It is entirely possible to cause a catastrophic event within the engine (read: melt a hole in the top of the piston) should this temperature not be kept within the manufacturer’s design limit. In the development of the Banks OttoMind, this temperature was carefully monitored and addressed to ensure against an excessive temperature condition. In addition, the transmission torque-converter clutch sensor was monitored to mitigate driveline stress.

The final baseline data to be established and recorded were road tests. Acceleration of 0-60 and 40-60 mph was tested in a controlled environment and averaged for times of 26.44 seconds and 13.60 seconds, respectively. While not the pulse-quickening times expected from late-model performance automobiles, that is respectable, considering the size, weight and aerodynamics of this vehicle.

Power Up the ISC

The installation of either Banks power system is best handled by a professional mechanic. That is not so much a result of the complexity of the Banks system itself, but rather the inconsistencies that exist in the chassis/engine placement and engine-control wiring that changes from manufacturer to manufacturer and from model year to model year. It is almost safe to say no two are exactly alike. Therefore, we would very strongly suggest you seek a professional installation directly from Banks or one of the company’s qualified dealers. They have the tools and experience to properly ensure your system’s installation and performance.

With testing, calibration and installation complete, the PowerPack-equipped Windsor developed 345 rear-wheel hp at 2,000 rpm and 1,037 lb-ft of torque at 1,400 rpm. Using the same parasitic loss figures when establishing the baseline, this equates to approximately 431 hp and 1,296 lb-ft of torque at the flywheel, a gain of approximately 24 percent more horsepower and 20 percent more torque!

During our 5,000 miles of road-testing, we have had the opportunity to drive in most conditions encountered when traveling cross-country with and without a dinghy in tow. We noticed the long 7 percent grades go by more quickly and bucking head winds is more manageable. We found driving the Windsor a pleasurable and relaxing activity as a result of the additional power available. Engine and transmission temperatures, which are monitored from three independent sources, have remained within safe operating limits, regardless of ambient temperatures and altitude.

In addition, we recorded small improvements in fuel economy. In controlled tests, we were able to see 9.8 mpg before the modifications were made; after the PowerPack was installed, the mileage went up to 10.6 mpg. However, individual driving habits vary in extremes and, as often is the case, drivers who take advantage of the increased power – and drive with a little more spirit – may not see mileage gains. Those who exert less pressure of the right foot should be able to improve fuel economy while enjoying better performance.

We take to the road to invoke a sense of freedom and to share those experiences with those we love. In our Banks-enhanced Monaco Windsor, we’ve just kicked it up a notch with the addition of the PowerPack engine performance kit. It’s a worthwhile option that pays off handsomely with that extra degree of performance you may have been wanting.