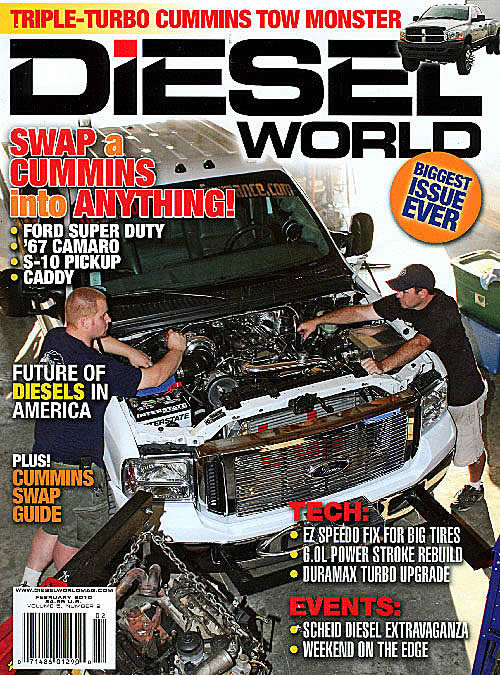 Our Story So Far:

This 6.0L V-8 came from an ‘03 F-350 that was running rough under all conditions. The owner brought it to Banks Power in Azusa, California, where the Banks Powerhouse shop performed a teardown and evaluation prior to making recommendations. A snapped No. 4 cylinder rocker arm accounted for the ugly miss in the engine, and after testing, six of eight injectors proved to be out of spec. The owner chose to rebuild the engine, and make upgrades in the process, since the truck’s cabin and chassis were in fine condition.

In prior episodes, we installed rebuilt, ported heads using AMP studs and a new gasket set, replacing valvetrain Components as necessary. After reassembly, the manifold, EGR cooler, turbo, oil and fuel filters, went on, and we began the long process of making connections to remate the body and the chassis. This month, we install equipment that will help the rebuilt engine to work better, last longer and make more power. We also get to see how it all works on the dyno.

The goal all along with this project was to repair a 6.0L Power Stroke with top-end damage so that it would become reliable, run clean and produce more power than stock. The techs at Banks replaced the head gaskets, ported the cylinder heads installed ARP studs to replace the factory bolts, did a three-angle valve job, installed new factory rocker arms and injectors, and cleaned up the turbo and EGR system before reinstalling the engine. Outside of the engine, the stock harmonic damper was replaced with a Fluidampr, the stock torque converter was replaced with a Banks Billet torque converter, and a Banks Big-Hoss Bundle was installed. 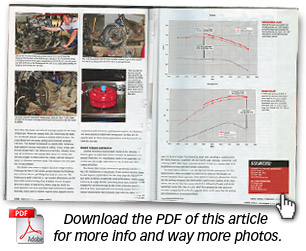 As far as we know, not a lot of 6.0 Power Stroke head work had been done prior to this project. Many mechanics consider the heads to be problematic, with a tendency to warp, and without a lot of performance headroom. Generally, when there was a problem, the heads were replaced rather than upgraded, because no one really knew how much improvement was to be had through porting. Let’s cut to the chase: It looks like the head work principally the porting we showed in Part 3 of this series – actually made a significant, measurable difference.

Our 6.0 Power Stroke, reinstalled in an ‘03 F-350, went on the chassis dyno and gained 154 hp over stock at 3,600 RPM, and 257 lb-ft over stock at 2,600 RPM. The addition of the Big-Hoss Bundle accounts for much of the horsepower gain, but these gains exceed what could be expected after installing the Bundle alone. This supports the conclusion that the porting resulted in about a 5-percent power gain over what could be expected in a truck with the same equipment, but without the head work.

We can’t prove it, but there may be more. Unfortunately, because the 6.0 was barely running when it came to Banks for repair, this particular F-350 Super Duty dually was too weak to dyno test. However, Banks has extensive baseline data on the vehicle, all compiled when developing parts, so that the 6.0. Power Stroke baseline data is used for comparison. Banks also has a long history of dyno-testing 6.0 Power Stroke powertrains with Big-Hoss Bundle upgrades, before and after, so they know what that combination of parts is capable of doing. They were encouraged to see that the ported heads contributed to power gains that exceeded the best results ever documented for a Big Hoss Bundle. It was not possible to accurately dyno the newly rebuilt engine in the lower RPM register because of the automatic transmission, but the dyno curves shown, if extended through the lower RPM levels, suggest that bigger gains would have been documented at lower RPM. In short, the new heads really do flow better, and that gain shows up at light throttle in lower RPM ranges, and sticks around all the way up to 3.750 RPM.

FLUIDAMPR
When the front of the engine was still accessible, the team at Banks Powerhouse replaced the stock harmonic damper with a Fluidampr. The harmonic damper attaches to the end of the crankshaft and balances out torque spikes created whenever a cylinder fires. It might seem that a damper would be an optional part considering the stout nature of a diesel crankshaft, but in fact, the crank, journal and bearings would not last long without one. When the engine fires, the connecting rod slams the crankshaft, actually twisting it slightly before it spins. The crank flexes and rebounds, setting up a torsional harmonic vibration. The damper is designed to absorb these vibrations. Most dampers contain some kind of rubber, which works well enough except that it can deteriorate over time. Visually, there may be no evidence, but usually after about 18 months, the vibrations begin to break down the rubber, and the damper’s ability to attenuate vibration fades. This damper was well past due for replacement. 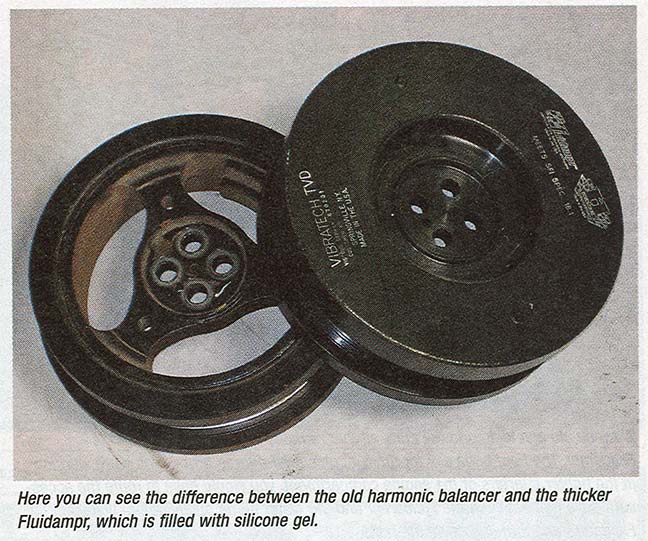 The Banks team chose to replace the stock damper with a Fluidampr for their F-350 owner, partly because the Fluidampr has a viscous silicone gel filling that does not wear out. The Fluidampr is made in the U.S.A. by Horschel Motorsports, an ISO 9001:2000 certified facility. Over 4 million viscous dampers conjunction with enhanced-performance engines, the Fluidampr has been shown to restore lost horsepower, so they are frequently used in diesel racing applications, and they are SF1 certified for that use.

BILLET TORQUE CONVERTER
Another necessary improvement relates to the driveline. It does no good to make more power if it can’t be delivered to the ground. Therefore, the transmission needs to be upgraded, and in this case, the Banks team relied on one of their own billet torque converters. 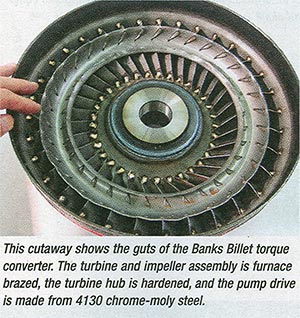 The Banks Billet torque converter is specifically matched to the 6.OL Powerstroke’s torque band. It will enhance towing ability and improve acceleration. but also help keep the transmission alive. In diesels modified for more performance, torque converters tend to slip, thereby generating more heat, wasting horsepower, and shortening the life of the protective transmission fluid. With more heat and more hunting around, the transmission works harder, and strains to cope with the added power.

In the end, the transmission burns down. The Banks design is based on a super-strong steel billet housing that does not flex. This enables the torque converter to maintain solid contact under greater torque loads, with a torque capacity of 1,100 lb-ft. compared to 740 lb-ft for the stock converter. Hunting, under load or driving up hills, is minimized. The lockup clutch is slip resistant, so the trans fluid stays within critical temperatures, maintaining its ability to protect and lubricate. Inside the Banks torque converter, the turbine and impeller assembly is furnace brazed, the turbine hub is hardened, and the pump drive is made from 4130 chrome-moly steel, hardened for durability. With these kinds of materials and heavy-duty design, the torque converter maintains structural integrity, allowing the rest of the transmission to do its job properly. 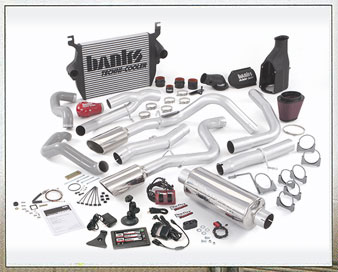 The Big-Hoss Bundle is a dyno-tested, matched set of components designed to add serious power to the Ford 6.0L diesel. It consists of a cold-air intake system, a hugely superior inter- cooler, plus a Six-Gun Diesel Tuner and stainless steel 4-inch exhaust. These components work together to bring in more air, which is notably cooler, so the engine can tolerate a richer fuel mix, making more power at any given EGT level.

The intercooler uses a thicker core area that improves volume by 21 percent and eliminates the plastic end tanks that are usually the source of failure on the stock intercoolers. The boost tubes are mandrel-bent, 3.5 inches in diameter and flow much better than stock. The intercooler flows cool air into an oversized High Ram intake manifold, for an absolute minimum in intake restriction. That eliminates a major bottleneck, because the stock intake will restrict the flow of air exiting the intercooler, resulting in considerable backpressure. By using the High Ram intake manifold, backpressure-induced losses can be reduced by up to 64 percent, so the engine becomes more efficient. Because the engine makes the same power under less throttle, better fuel economy is also a realistic possibility.

SIX-GUN TUNER
The Six-Gun tuner is named for the six power levels it offers, all of which can be changed on the fly. It allows for tuning pulse width, timing and fuel pressure, and is equipped with Banks- exclusive safety features. Those systems, called AutoRate and Active Safety, guard the engine and transmission from excessive temperatures. When combined with the PowerPDA – an interactive touch screen command unit – the Six-Gun can add a seventh power level, resulting in rear-wheel gains of up to 138 hp and 231 lb-ft of torque. The PowerPDA, aside from providing a control screen for tuning functions, is portable and can handle your calendar, contact list, hold a library of MP3 files, digital pictures and more. It rests in a custom dash docking station and uses infrared wireless connectivity.

We didn’t have a chance to see the Big-Hoss Bundle parts go on, but they were in place when our project 6.0 went on the dyno, so we thought we should document those upgrades. Their presence definitely affected the results, but the porting enhanced the overall effect significantly. Looking at the dyne charts, we can see that the newly rebuilt 6.0, with ported heads and rebuilt valvetrain, made 396.4 hp at 3,200 RPM. That exceeds the best gain ever recorded using a Big Hoss Bundle upgrade alone, so it’s clear that the porting job complemented the tuning package. 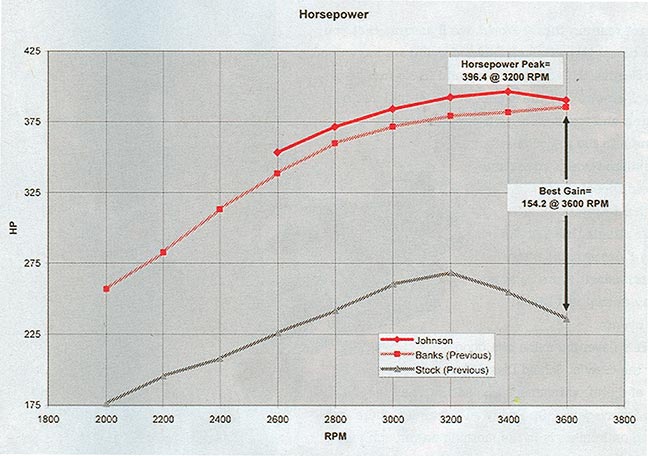 Note that the tuned and rebuilt F-350 not only exceeded the F-350 baseline, but that the final output exceeded the best numbers that the Banks team had ever seen on a F-350 with the same performance package.