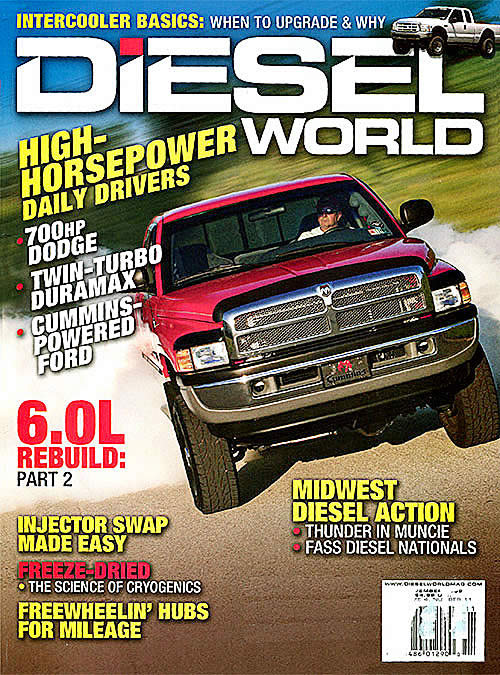 Part two of the 6.0L Power Stroke re-build project, were we find out what failed and what didn’t, and see the opportunities for upgrades.

For those of you who just joined us: We came across a 6.0L Power Stroke V-B from an ‘03 F-350 that was Obviously running poorly. The owner brought it to the campus of Banks Power in Azusa, California, where the Banks Powerhouse shop performed a teardown and evaluation prior to making recommendations. At that point, the owner chose to rebuild the engine, and make upgrades since the truck’s cabin and chassis were already in good condition.

Last month, we looked at the causes of engine failure, which included damage done by a snapped rocker arm. Aside from galling other nearby valve train components, the broken rocker allowed a deposit of soot to accumulate in one piston, and on the valves and heads. Gummy deposits on the valve guides and elsewhere also suggested that fuel or other contaminants may have gotten into the oil. This month, we’ll take a look at the injectors and the turbo to decide what can be saved, what can be rebuilt, and what must be replaced. 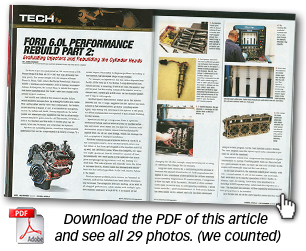 Injectors are incredibly precise, sometimes temperamental assemblies that can be compromised in a variety of ways. To a certain degree, it’s possible to diagnose problems by looking at the injectors, just like spark plugs on gas engines.

For example, an injector nut that has carbon deposits from the tip all the way up to the bottom 0-ring shows that combustion blowby is occurring. If that’s the case, the injector may still be good, but the sealing surface of the injector must be cleaned with solvent and a stiff brush for the chamber gasket and O-ring to seal properly.

Injectors can also go wrong when there is upstream mechanical failure, such as when a pump or snubber valve fails and sends metal flakes into the injectors. Another well-documented cause of failure comes from misaligning the injector with the oil rail inlet fittings, which can damage the seal – a symptom of improper installation.

Another common cause of injector failure in the 6.0L is fuel interruption and/or air in the fuel system, where the fuel filters or fuel lines get clogged so the injectors can’t fill up with fuel between cycles. When this happens, the injectors might operate at close to normal for a period of time, but eventually two small parts in the injectors – the check plate and plunger spring retainer – will fail, leading to a dead miss. The lack of power will typically cause the driver to increase throttle, which raises fuel demand and exacerbates the fuel delivery problem. In the end, injector failure is the result.

Another injector problem, static friction (or “stiction”) is common, and service bulletins have been issued documenting the cause. The symptoms are hard starting, or no start at all, sluggish performance, white smoke, with multiple cylinders missing, especially at high RPM. It is caused by not changing the oil often enough, using the wrong oil or using oil additives that change the oil’s viscosity.

Long idle times seem to be a contributing factor, because it increases the amount of soot in the oil. Cold temperatures also appear to be a contributor, if they prevent the oil from reaching proper operating temperatures. To combat stiction, it’s important to have the right oil for the season, changed as often as every 5,000 miles for severe duty. In cold operating conditions, a block heater would be a good countermeasure. (A Ford service bulletin has been issued on the subject, and a fix has been developed using a revised program for the Fuel Injection Control Module. The new program uses the injector spool valve solenoids to preheat the oil at the injectors).

Injectors are critical wear components that depend on regular maintenance to survive. If nothing gums them up, they can last for a good amount of time, but hard use and a lot of hours on the engine will eventually wear out the best of them.

In the case of our 6.0, the injectors looked good visually, with only a normal amount of soot on the nozzles. Just to be sure, they were sent out to injector specialists at BECS Pacific, in Whittier, Calif., for testing. There they were attached to a Hartridge HA230 injector tester, which tests four injectors at a time. The machine can indicate oil flow capability and allows the fuel spray pattern to be revealed.

As it turned out, six of the eight injectors were shot, too much out of spec to be rebuilt; the remaining two were within spec, but not by much. The advice from BECS was to replace them all. New injectors from Ford run about $290 apiece. Remanufactured injectors are available at about $205 each. The Banks team ended up ordering eight new injectors from Ford.

The turbo was inspected for bearing play and other signs of wear. Turbos spin at very high RPM, lubricated by a thin film of oil on a ring bearing. The bearing can wear, or it can build up deposits of carbon from oil burning onto the shaft immediately after shutdown.

Turbos also can get gummed up by unburned fuel and in variable-flow turbos, the vanes are prone to getting stuck. This can be caused – once again – by contaminated fuel, excessive idling in cold weather, or low engine-operating temperatures. Many turbo specialists think it is good for the turbo to be operated at full-throttle conditions periodically, just to keep the carbon deposits to a minimum. A standard turbo rebuild starts at around $350. As it turned out, this turbo was a little dirty, but otherwise perfectly good. The turbo was cleaned up and rebalanced, and set aside for reuse.

The cylinder heads were disassembled and inspected. Warpage was not a severe factor, so it was decided that the existing heads could be rebuilt and possibly improved in the process. The heads on the 6.0L are cast iron, and while there is not a lot of room for performance modifications, the castings are not especially smooth, and there was evidence of corrosion in some of the coolant passages and exhaust ports.

The Banks crew suspected they could improve airflow by cleaning up the ports, but that had to be done judiciously, without disturbing the swirl patterns or taking too much material.

The porting was followed by a three-angle valve job, which involved developing an “ideal” spec for the intake and exhaust valves, based on repeated cuts, trials, measurements and more cuts. This was extremely careful, painstaking work that took quite a bit of time, but the Banks crew includes a group that used to work at Cosworth Racing, so they are accustomed to working this way.

Since there was no plan to go to oversized valves, the benefit would be limited to what could be done while working with the OEM parts. After cleaning, the heads, valves and springs were carefully reassembled, using the same procedure Banks techs use on their own racing heads. They measured each valve and each spring, then matched them accordingly for the most consistent setup.

Normally, a simple valve job for a V-8 at a shop that is set up to handle the work in volume should run around $400, although it is unlikely the work would be handled with such care at that price. In the end, the Banks team arrived at what was described as a “mild, street porting,” but with expectations that their work would yield some measurable improvements in low-end torque, with better throttle response.

Next month, we’ll put the heads and valve train back on the engine using ARP studs instead of torque-to-limit head bolts.