Banks PowerPack on an Ford F-150. “The idea is to build a performance truck that can be used as a daily driver and as a weekend camping/exploring/desert running truck.”

We decided the vehicle of choice would be a Ford F-150. So, much like what a lot of our readers might own and be in a position to modify and upgrade. As such, we purchased a clean 2006 XLT Supercab with 6.5-foot bed. We went with the reliable three-valve 5.4L Triton V-8 backed with the 4R75E four -speed auto tranny. 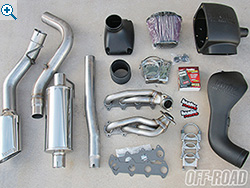 We’ve got some plans to turn this truck into a fun dirt romper but keep it practical as well. The idea is to build a performance truck that can be used as a daily driver and as a weekend camping/exploring/desert running truck. We’d like to leave the bed mostly intact to retain cargo area for hauling building materials, camping gear, and dirt bikes. The project emphasis will also be towards a good bit of DIY work using readily available vendor products. Most of the work could be done in an average home garage, but might require some fabrication tools. We also know that a lot of you can work on your trucks on the weekend, but can’t have the truck down for a long time. So, we’re looking to try to complete each build phase over a weekend or less so the truck is ready to drive to work again on Monday.

One of the first upgrades we wanted to tackle was engine performance. We were pretty pleased with our engine power, but know we’ll yearn for a little more power and torque as we upgrade to bigger tires later. We went in search of more power first.

Most truck enthusiasts are well aware of the prowess of Banks Power when it comes to making big diesel power. But not everyone knows that Banks also offers some kits for gasoline engines as well. We turned to them when we wanted to add some ponies and pulling power to our Triton V-8.

We opted to install the Banks PowerPack kit on our truck. It consists of their Ram-Air Intake System, TorqueTubes (headers), Monster Exhaust, and AutoMind Programmer to address the intake and exhaust sides, plus retune the factory engine control module to take advantage of the free-flowing components. Banks also offers their Stinger kit without the header option, if you so choose.

We installed all the components in about 10 hours. The instructions were pretty much spot-on accurate and easy to follow. Literally, everything we needed was included except for common hand tools. There was no running to the store to pick up any little installation items.

We were curious how much weight difference there was between the stock and Banks components. The intake weights were close. However, the new exhaust parts were quite a bit lighter, allowing us to shed about 21 pounds off our truck.

With all the components installed, we loaded up the Sport 87 octane engine tune program using the AutoMind Programmer and fired up the truck. The exhaust note was pleasantly deeper. Under medium to heavy throttle, there was more exhaust noise than stock, but at light throttle cruise the exhaust was fairly quiet, without any cabin drone.

We didn’t get the chance to run our truck on the dyno rollers, but the difference in performance is notable, just using the 87-octane tune. Throttle response was quicker and the modified shift points made transmission gear changes crisper. Banks testing shows gains up to 45hp and 47lb-ft of torque at 5,000 rpm. We’re quite pleased with the increase in power and are looking forward to trying out some of the more aggressive, higher octane tune.

Stay tuned as we build up this project in a number of following OFF-ROAD issues. We’ll take you along as we turn wrenches and then turn tires building this truck from a stocker to a fun dirt runner. OR