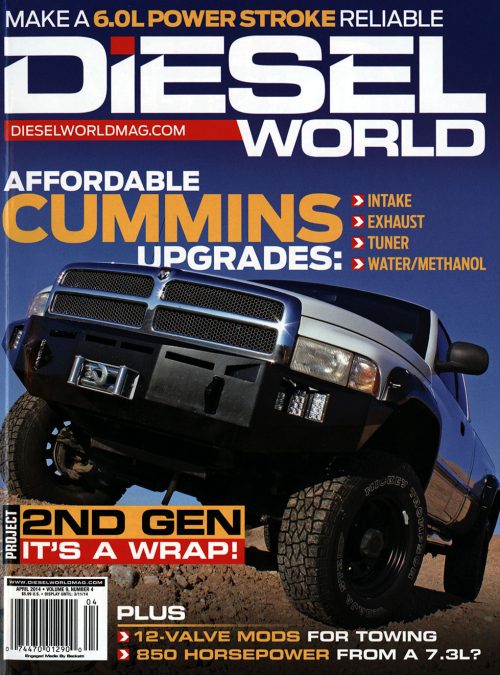 No surprise, then. that Gale Banks of Banks Power wanted to add more 12-valve options to the company’s extensive line of diesel power adders. “We had planned to do that for some time, but didn’t have access to an engine,” he admitted. After locating a semi-stock ’96 Dodge with the 12-valve, the Banks procedure was put in place: repeated testing and documentation so you can back up what you offer with solid documentation. The overall approach was fairly direct, but the specifics were far more involved, requiring several different combinations of components. Space doesn’t permit covering all the variations that were evaluated, so we’ll focus on simply the before/after results. Keep in mind that since this rig is used primarily for towing and hauling, the power upgrades were targeted for a work-truck configuration, not a dragster or double-throw-down hot rod. As part of the process, output at the rear wheels (measured on the Banks chassis dyno) was 160 hp at 2,400 rpm, and 380 lb/ft at 1,700 rpm. Note that the engine baseline number came from a pure stock 12-valve tested earlier by Banks. Our guinea pig is fitted with real-world mods that most 12-valve owners have done: #8 fuel plate, aftermarket intake along with an upgraded turbo and exhaust manifold. No changes to the fuel delivery system were done throughout the project.

The first step was bolting on a Banks PowerPack, consisting of a Ram-Air cold-air intake, a Twin-Ram intake manifold, a some-what larger prototype of the Sidewinder Turbo with a Big Head wastegate actuator, and a Banks Monster exhaust. The gains were immediate and significant: 94.4 hp at 2,200 rpm, hitting a peak of 249 hp. As for torque. the dyno recorded an increase of 227.6 lb/ft at 2,000 rpm, topping out at 608.4 lb/ft. Those numbers amount to a 60 percent or more increase in output, both ln horsepower and torque, with the modifications already done to the motor. Interestingly, by way of comparison, on a totally stock 5.9L Cummins, peak torque is typically at 1,750 rpm, so the powerband curve not only Increased, substantially with the addition of the Banks PowerPack, but also moved somewhat. Those power numbers proved out on the street, too: the 0-60 mph time, when unloaded, dropped from 12.75 to 9.69 seconds more than three seconds quicker for a 24-percent improvement. When towing, the 0-60 mph time dropped 34 percent, from 39.67 to 26.01 seconds. Adding the Banks Straight-Shot water/meth system on top of the PowerPack produced even bigger gains across the board. Peak output recorded on the dyno was 305.2 hp (more than 105 hp, or 97 percent), and 745.8 lb/ft (a gain in excess of 365 lb/ft, or 92 percent). Clearly, the addition of Banks Straight-Shot water/meth system makes some serious power on the dyne utilizing a 50/50 mix of water and methanol.

On the road, the truck flew through the mountain passes in the High Sierras between Reno and Sacramento. The throttle response was so much improved it felt like a completely different rig. When pulling onto the highway, its a real kick to have that much more power on tap when you need it. But there are other benefits, too. As noted in a previous article on the water/meth system in this truck, the EGT (exhaust gas temperature) was anywhere from 50 to 150 degrees lower on a steep climb up to Lake Tahoe, which we’ve run many times before. We also hooked up a 30-foot trailer for a trip over the hill” to evaluate. The towing performance, and what was once a slow. hot slog on previous trips, was now much faster, cooler and easier.

We should mention a few caveats here, however. While the addition of water-methanol injection increases power substantially, it can increase EGT to unsafe levels unless air density Is improved as well (such as with the Banks PowerPack). So when using water/meth as a power enhancer, be sure to increase your engine’s air density as well, or cut back on the ratio of methanol to water. Note, too, that while water-methanol will inevitably increase EGT, water injection alone can be used to decrease EGT. With the PowerPack components installed, Banks recorded a peak EGT with water injection of 1,295 degrees, 50 degrees cooler than with no injection, and 110 degrees cooler than the baseline configuration. Under normal driving conditions (not fully loaded at partial throttle) drivers may notice a decrease In EGT with water-methanol injection active. due to non heat-soaked conditions. (Which basically means that only under head loads at full throttle will the EGT typically increase with water/meth.) in addition, during the process of pulling more power out of 5.9L Cummins. Banks technicians noticed that the head was starting to lift off the block. The age of the engine might have been a factor here. because upon removal, a crack was discovered in one of the valve bowls as well. For an extra measure of insurance. a remanufactured cylinder head replaced the original unit, which was

secured with ARP studs. All told. while we really appreciate the dramatic improvements in performance provided by the Banks PowerPack and StraightShot water/meth systems, we actually put an even higher priority on one simple improvement: the EGT. Knowing how critical that heat level can be for long-term durability, especially on a truck that regularly tows and hauls up steep inclines, we were truly gratified to see how much lower the EGT now is when climbing through Donner Pass. This fundamental fact bodes well for the long-term life of a truck that well be counting on for many more miles of head use.

After thorough cleaning of the threads. the ARP studs are test fitted and checked for fitment.

The solenoid for the Banks Straight-Shot water/meth system doesn’t take up much space, and can be mounted right next to the battery. of wherever else is convenient.

After some issues were discovered with the head gasket and valve bowl, a remanufacture factory head, supplied by Valley Auto Parts, replaced the original unit.

The ARP studs are put in only finger tight, so when torque is applied to the nut, the stud will stretch only on the vertical axis. Be sure to apply a generous amount of thread sealer or Loctite to prevent air pockets that might result in leaks. Because the head gasket well compress upon Initial torqueing, re-torque the bolts after the engine has been run.

This pile of electronics is for data acquisition, along with an opacity meter and tachometer.

These high-accuracy pressure transducers evaluate air density and other variables.

The Banks Ram Air system replaces the factory filter with a cold-air induction system. This setup provides Increased air density, measured as a percentage of ambient at the turbocharger Inlet. In stock form, air density was 91.5 percent of ambient, but the Banks Ram Air system Increased that by 3.5 percent t0 94.0 percent. This might not sound like a huge gain In air. but every bit means a better burn.

For this particular project, a larger, experimental waste gated turbocharger was used to deliver greater air density and reduce EGT, In anticipation of the water-methanol injection. Peak boost more than doubled. going from 16.4 psi stock to 34.4 psi, a gain of 18 psi.

The Banks Monster exhaust, which includes both a downpipe and a 4-inch cat-back tube, reduces exhaust backpressure, dropping from 1.6 psi (stock) to 1.6 psi.

Any Cummins engine builder worth his salt knows the benefit of adding head studs to an engine with increased combustion chamber pressures which come from more boost or more bang. They’re especially needed when upgrading a turbo to keep the head gasket from expanding and possibly rupturing, due to the factory head bolts stretching. For extra strength and durability, ARP’s head studs are made from 8740 chromoly steel and have a 190,000-psi tensile-strength rating. They are precision centerless-ground and thread-rolled to Mil-S-8879 specs, with a black oxide finish for corrosion resistance. More importantly, they provide even clamping force. The kits come complete with hardened washers and high-strength hex nuts.