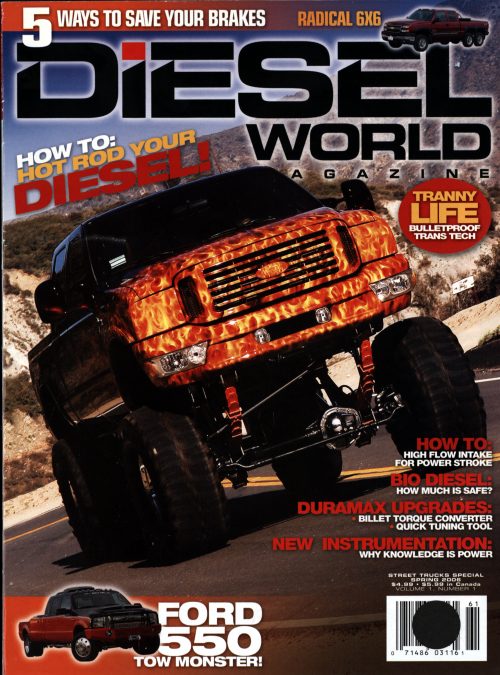 An Exhaust Brake Primer and Products

Those new to diesel engines quickly learn that the absence of an intake throttle plate and different valve timing relative to a gasoline engine results in no vacuum and little compression braking. The retarding difference is far greater between gas and diesel than between carbureted and fuel-injected gas engines, despite the diesels substantially higher compression ratio. However, an exhaust brake can resolve that issue, and bring other benefits.

Rather than limit inhalation, an exhaust brake limits the air that leaves the engine by effectively plugging the exhaust pipe, thereby using backpressure to create compression braking. The amount of brake horsepower depends on engine size and to a lesser extent engine speed, with the majority of diesel pickups easily capable of producing 150-200 braking horsepower. The primary benefits of an exhaust brake are safer truck operation, especially when towing heavier loads, and longer service brake life. It’s is not uncommon for an exhaust-brake equipped truck to be able to descend a typical six- or seven-percent grade at 55-65 mph in direct drive or overdrive even with a combined weight of more than 14,000 pounds, which keeps the service brakes cool and available for when you need to slow or stop more immediately. There have been instances of towing guides recommending exhaust brakes for towing at maximum loads with some diesel pickups, but as of this writing we can find no such requirement for 2006 model trucks.

Many diesel-powered motorhomes, especially pusher-chassis models, have an exhaust brake as standard or optional equipment, and some of the sources herein build exhaust brakes for Caterpillar, Cummins, international, and other engine brands. On many chassis, activating the exhaust brake automatically turns on the brake lights and you should be aware ii yours does this. Most people following too closely with your brake lights on will not avoid you If you actually have to slow urgently with service brakes because there is no visual clue behind. Fortunately, this feature has yet to be incorporated into any aftermarket pickup truck exhaust brake.

There are two lesser-known advantages of exhaust brakes as well, the first being potentially quicker warm-up. The first Power Stroke had a throttle butterfly in the exhaust system, and closing the exhaust builds more compression and therefore more heat in that front pump much faster. Virtually every brake on the market has a safety switch that turns the brake off when the throttle is pressed, but some enterprising owners set the system up so the brake will stay on at idle just for this reason and to minimize EGT fluctuations. The other advantage is in driving style. On the road in rear-wheel drive, the exhaust brake provides retarding action only through the rear wheels. This feature is more useful on older diesels without four-wheel ABS because you can slow without any chance of locking or skating the front wheels. In four-wheel drive low-range you can use the exhaust brake to help limit descent speed much like the Hill Descent Control pioneered by Land Rover and found on many new SUVs. Since the engine will keep idling, the wheels will never lock and lose steerage, but you’ll get a downhill creep smoother than half the driving population can do with brake pedal modulation, and it takes any ABS system out of the picture.

Although some exhaust brakes mount in the exhaust pipe underneath (remote mount), many either attach directbanks-brake1ly to the turbine housing or fit in right behind it (turbo mount). The turbo mount method puts pressure on the fewest number of joints and gaskets, maximum back pressure will vary by engine. (Most Power Stroke 7.3 engines run about 35 psi, the 6.0 runs about 40 psi; early Cummins were 35 psi but upgradeable to 60 psi by changing the exhaust valve springs, which later became standard; and Duramax runs 55 psi; on ’06 models the variable turbo vains aid braking) Brakes use a maximum pressure switch that cycles the brake off if the max back pressure limit exceeded. If your brake is set aggressively and you have a heavy load at high rpm, the cycling could get annoying so lcld be wise to slow on service brakes to a speed and gear your setup is comfortable with. Brake application (closing the valve) is done by vacuum, compressed al, or electric power. Many RVs already have compressed air but few pickups do, so make sure you get the appropriate system and all the required hardware. Some units have holes predrilled and tapped for back pressure gauges and pyrometers, although any pyrometer mounted behind the turbo will read significantly lower than If mounted ahead of it, the measure point engine builders use in specifying maximum EGT. Installation can be done by a competent do-it-yourselfer, although its best to apply the wonder mist” to those exhaust system fasteners the night before, and verify that no welding is required. Automatic transmissions presented the biggest obstacle to exhaust brakes, because unlocked torque converters did not transfer the engine’s braking ability to the wheels but did generate excessive heat. Various programmers were employed to lock-up converters during off-throttle and in, at minimum, the top two gears. Line pressure devices were also developed to maintain proper lockup operation, and in many cases owners changed the torque converter itself to a stronger unit. You have to check with your manufacturer to see if an exhaust brake can be used with your automatic transmission, and if not, what can be done to mitigate any concerns and how it will affect your warranty. Virtually every manual-gearbox pickup can handle an exhaust brake without problem, as can the majority of MH3000 and 4000-series Allison automatics found in most motorhomes.

Note that an exhaust brake is not the same as an engine, or Jake Brake, which alters valve timing to reach the same outcome. While the company that makes Jake Brakes also makes an exhaust brake for Cummins engines, the Jacobs exhaust brake is not an engine brake. This could be an important distinction if you run across a road sign instructing “no engine braking” or something similar, although most communities are learning that “unmuffled” is a key word that should be on those signs and that an SRT-10 pickup decelerating will make more noise.