Everyone knows Gale Banks is a hot rodder. He loves to make things go fast. Boats, cars, trucks; it doesn’t matter – hot-rodding is a pure joy only other car guys can fully understand. It’s hard to find an engine that doesn’t intrigue him and make him wonder how he can make it better, faster, and more reliable. This challenge is both an obsession and an art form, and has become Gale’s life’s work.

One of Gale’s pet engines is the Ford EcoBoost series, especially the 3.5L. A few folks (maybe even some of you) weren’t happy to see Ford replace the venerable F-150’s normally aspirated V-8 with a V-6 Turbocharged engine.

Not Gale. Instead, Gale got intrigued. It has not one but two turbos! He started looking at key features like the Fordfirst port fuel and direct injection (PFDI) with two injectors per cylinder (one in the air intake port and one inside the cylinder) looking to improve power and efficiency. First, there are the all-new twin scroll turbos that offered greater on-demand power. These and many other features are vital to the EcoBoost’s ability to surpass the naturally aspirated, small displacement, 6-cylinder engines and create nearly equal output to naturally aspirated V-8 engines. All this makes the 3.5L EcoBoost a solid horsepower alternative to the current V8 while using less fuel. Still, as we often hear around here, “Gale wants more.”

You can now buy an EcoBoost F-150 at the same price (or less than) a V8 F-150, getting nearly the same horsepower and even greater torque. The 3.5L EcoBoost is SAE certified at 375 hp and 470 lb.-ft.  of torque, compared the V-8’s 390hp but only 400 lb.-ft.  of torque. Pretty obvious why they are so popular. Both the 2.7L and 3.5L versions of the EcoBoost F-150 offer excellent power and acceleration right out of the factory, but that never stopped Gale from trying to improve overall performance. That’s when we started down the path to creating a budget Raptor engine, but better! The Raptor version of the 3.5L EcoBoost has 450 hp and 510 lb.-ft. of torque. Unfortunately, this engine also boosts your price tag — by as much as $15,000. We don’t have proof, but the rumor around here is this engine (plus Gale’s passion for 3.5L EcoBoost) is what inspired him to take our tuners to the next level; a level we now call the Derringer.

Our in-line Derringer tuner upgrades your EcoBoost F-150, offering “adaptive tuning” with power gains across the full operating rpm range, starting right off idle and marching to the shift point in each gear. The dyno-calibrated Derringer plugs into the OBD-II port and a small harness to grab multiple data inputs like throttle position, rpm, vehicle speed, and coolant temperature, just like your engine’s ECU. Its microprocessor-based electronics can actively and safely optimize calibrations in real time. Because the Banks Derringer is integrated with the vehicle’s ECU through its OBD CAN data stream, online, in real time and a closed loop, it is integrated “as one” with the vehicle and leaves no footprint. This integration is a huge advantage as it allows the Derringer to self-adjust, meaning it will optimize power yet maintain safe engine operating limits by monitoring current engine load conditions. These parameters include boost, knock sensor, coolant temperature, air/fuel ratios, EGT levels, and most importantly the “accelerator pedal position.” This last reading is vital as it tells the Derringer what the driver wants (via foot-on-throttle) and adjusts accordingly, again maximizing the system. Simply stated, it’s automatic: no turning a knob, as some competitors would have you do. No guessing at the correct setting and no selecting a setting while the engine is cool and when it warms up, now all your settings are off. Either way, knobs mean you are not optimizing power or are operating the engine outside the “safe” zone (most likely, both).

The Deringer has three switched settings: Stock, Plus, and Sport, and six settings if you control it with our iDash 1.8 Super Gauge. The Sport setting produces Best in Class performance and is the only setting to feature our Afterburner, a 10-second throttle actuated boosting feature, similar to the Combat Power settings on our military engines. Here’s the cool part: when running in Sport, the Derringer literally knocks you back in your seat. The Plus setting is for work use and has a tremendous mid-range feel. Running Plus with a loaded work truck or pulling a trailer improves your on-ramp merging speeds and passing times significantly.

But Gale wanted to make sure that in addition to protecting the engine we protected you, so we built in “Banks Active Safety,” letting the Derringer bypass itself if it loses its 12-volt power or fails in any other way. When Banks Active Safety engages, you get no codes and return to stock power. When our competitors’ units fail, they trigger trouble codes and force the unit into the factory “limp home” mode. Frustrating at any point, but if you’re in the middle of passing someone, and “brand x” drops into “limp home” mode—that’s downright dangerous.

What does this mean for you if you have or are looking to purchase an F-150 with an EcoBoost engine? How about any Ford with an EcoBoost engine, or a Ram/Jeep EcoDiesel, or very soon an L5P Equipped GM Pick-up? Well, the 3.5L EcoBoost modified with just the Derringer alone, in Sport mode, adds up to 90 hp and 116 lb.-ft.  of torque. Do the math. Now you are at 465 hp and 589 lb.-ft.  of torque. That’s 15 more horsepower and 79 lb.-ft. of torque better than the Raptor 3.5L EcoBoost. So, the question becomes do you want to pay an extra $15,000 for the Raptor Engine, or do you buy a Derringer for $389 and get more horsepower and torque than the Raptor?

P.S. Banks Power also has Cold Air Intakes and Exhaust Systems for early and the late model Ford F-150 3.5L EcoBoost – more on those another time. 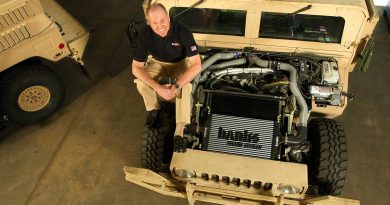 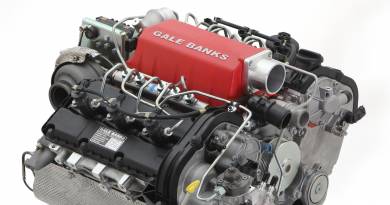 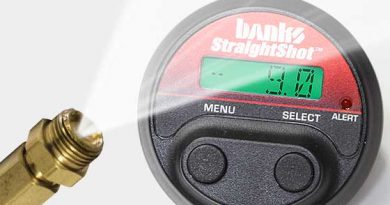