The JLTV program is providing our military with the world’s most capable light tactical vehicle.

But what is the JLTV (Joint Light Tactical Vehicle) and why is it so important?

Oshkosh, the manufacturers of the JLTV, put it this way: “The JLTV program remains a top priority for the Department of Defense, filling a critical capability gap for the U.S. Army and Marine Corps by replacing a large portion of the legacy uparmored HMMWV fleet with a modern light protected vehicle. The JLTV provides unprecedented protection and off-road mobility, as well as transportability via air, land and sea. The JLTV production contract calls for Oshkosh to deliver a total of nearly 17,000 vehicles, as well as kits and services over an eight-year period with first vehicle delivered in October 2016.”

Kris Osborn of nationalinterest.org put it this way: “When compared with earlier light tactical vehicle models such as the HMMWV, the JLTV is being engineered with a much stronger, 250 to 360 Horsepower engine (Banks 6.6 liter diesel engine) and a 570-amp alternator able to generate up to 10 kilowatts of exportable power. In fact, due to the increase in need for on-board power, the vehicle includes the integration of a suite of C4ISR kits and networking technologies.”

And here’s what I say about it: Our team, the best engineering team in the racing and performance aftermarket, has won the biggest military engine contract in the last 30 years!

This fact has been holding for 58 years: when we race we win! We gave the Banks JLTV military engine development project the same intensity and excellence we apply to everything we race and everything we manufacture. But this win was different; this race was against the most powerful defense contractors in the world, and it took 10 years to win it. I’m damn proud of that and I’m damn proud of the people I get to work with. After all…They are Banks!

About our customer, Oshkosh Defense, builder of the winning JLTV design… these guys have built the most convincing winner I’ve ever been associated with! They know what they are doing and they engineer to win. I’m honored to know Banks Power is part of that win.

From here, Banks Technologies (our engine production company) takes over as the exclusive engine supplier to the JLTV production program. Banks Power is now free to refocus our team on new products for the turbocharged engine aftermarket, both gas and diesel cars, trucks, hot rods, boats, and racers. Competitors, this is your notice… sleep with one eye open. Because it’s on! 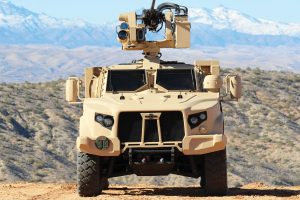