The 90th running of the famed “Race to the Clouds” will take place on August 12, 2012 with the Dallenbach Racing/Banks Power team ready to bring the Unlimited Class record back to the USA. 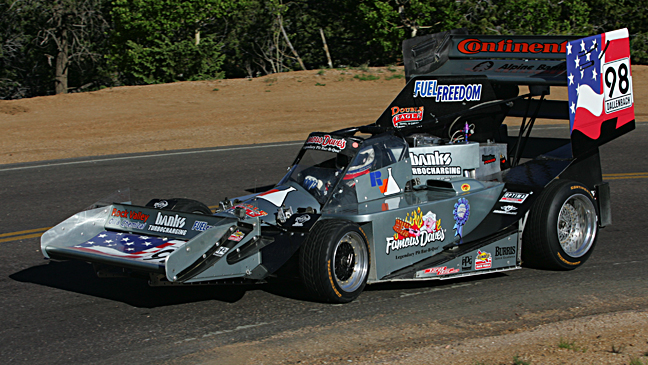 The 90th running of the famed “Race to the Clouds” will take place on August 12, 2012 with the Dallenbach Racing/Banks Power team ready to bring the Unlimited Class record back to the USA. Driver Paul Dallenbach and team owner Leonard Arnold have teamed with the engineers and techs at Banks Power to mount a serious challenge to the mountain and to the record book. Expectations are high for the group of self-described “old-school hot-rodders” as they mount their David vs. Goliath battle against the mega-funded super-teams with their grass-roots rear-wheel-drive V8 powered effort.

Team members are looking for redemption on the mountain after last year’s promising practice runs and bitter disappointment on race day where a half shaft broke during the race run. Not only did the race team prepare the Wells/Coyote chassis and Lola transaxle with larger diameter 300M half shafts they also set up the car with more down force to take advantage of the Pike’s Peak course that is now paved for the full 12.42-miles and 156 turns to the summit at 14,110-feet above sea level. In addition to the chassis set-up and drive train improvements the engineers at Banks Power were also able to increase the boost and further refine the Banks Twin-Turbo system on the 442 cubic inch Chevrolet small-block V8 to increase power output to an astounding 1,400-horsepower and 1,301 lbs/ft of torque (dynoed at altitude). Showing that hot-rodders can still get it done, with an OHV push rod V8 engine sporting a set of massaged SB1 NASCAR-style cylinder heads.

After running the car with a normally aspirated engine in the past,  Dallenbach Racing’s team principle, Leonard Arnold called on Gale Banks last year to turbo charge the V8 to be competitive on the high-altitude PPIHC race course that starts at 9,390 feet above sea level and finishes at an altitude of 14,110 feet. The turbo chargers, waste gates, intake air management and intake plenum are the same as used on production Banks Twin-Turbo V8 engines and turbo systems. The turbine housings are sized to work with the methanol fuel Dallenbach Racing feeds into the Chevy V8. Through refinement and testing the team has tuned the engine more aggressively than last year providing better throttle response and more horsepower. In fact at 1400hp and 1307 lb/ft Dallenbach has nearly 100 more horsepower and almost 100 more lb/ft of torque at his disposal under his right foot than he did last year, and nearly double the power of when the engine was normally aspirated!

The engine improvements utilize Banks altitude compensation technology that they developed originally for the US military. The electronic engine management is set-up to deliver constant air density to the intake manifold from the start of the run to the peak of the mountain where the air is much thinner. To compensate for the thinning air as the racecourse climbs the mountain the turbo speed increases to feed the engine with the same density as at lower altitudes. Banks engineers are demanding all the density they can get without overspeeding the turbos, which could result in a turbo failure. Knowing the performance map of the turbos at temperature, pressure and speed enables the Banks density management system to prevent turbo overspeed problems.

The combination has been providing excellent results in testing with Dallenbach behind the wheel. Before the race was postponed; their June test times were 26-MPH faster through the “Picnic Grounds” lower section of the racecourse coming through at 144 MPH this year compared to 118 MPH last year. Not only does the car have more top speed, Dallenbach is also carrying more speed through the turns and accelerating out of the turns faster than ever before. With more speed in the turns Dallenbach must make adjustments to his braking points, so the team refined the braking system as well with more aggressive pads and a new master cylinder to give the driver better braking feel.

Rather than run “slicks” the team chose to stick with treaded Continental race tires. While the engine can easily overpower the massive Continental’s and haze them even at speed in fifth gear as seen in our testing Go-Pro footage, the treaded tire is more resistant to punctures from a stray piece of gravel that could be thrown onto the course from a previous driver. The treaded tire also acts as a mechanical fuse of sorts, spinning under the full brunt of the 1,400-horsepower Chevy V8, rather than breaking something mechanical in the driveline or transaxle.

Testing has shown that Dallenbach has the potential to win this year’s running of the PPIHC. If all goes as planned we expect him to take home a new record in the process. The team is planning a test session at Pike Peak International Raceway’s road course to shake down the car once again and verify the performance enhancements on Tuesday August 7, 2012 before tackling practice sessions on the mountain Wednesday, Thursday and Friday culminating in the 90th running of the PPIHC on Sunday August 12, 2012 starting at 9:00 am.