We’ve talked about how an intercooler works and the importance in the ballance of airflow and density for real performance. But what is density, and why is it important? Find out why being dense… makes sense. 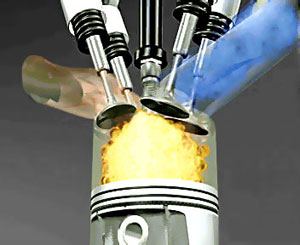 Unlike gasoline engines that throttle by air, a diesel engine throttles by fuel. Therefore, a diesel computer tuner will add more fuel to the engine, creating greater power. The misconception here is that a tuner is all you need, and that’s a huge mistake. This is because the tuner is only part of what makes power in diesel applications. “Air” is the other half of the power equation. Or, more specifically, “air density,” which is the weight of air in a given volume measured in pounds per cubic feet. In other words, the more a cubic foot of air weighs, the more oxygen there is in the air.

Adding additional fuel to a diesel engine without adding additional air has two dramatically negative effects. First, by dumping fuel into a diesel without the appropriate amount of air to go along with it, a considerable portion of the fuel does not completely combust. This uncombusted fuel is often seen coming out of a diesel’s tailpipe as black, sooty smoke. It’s wasted fuel. What I like to call, “horsepower you can see, but can’t use.” All this smoke contaminates the engine’s oil at a much faster rate than normal. Here’s what happens: Modern engine oils typically contain a chemical which gives the oil its extreme pressure capability. You might call this an “anti-wear agent.” When a massive amount of smoke is present, soot invariably gets past the rings and into the oil, where it binds with the chemical, disabling it. When oil loses its anti-wear agent, internal engine parts wear faster.

Now that you know the bad things that happen without providing enough air to a diesel, let’s talk about the good that providing enough air does. Air provides oxygen, which allows fuel to properly combust. With proper combustion comes more power, but without smoke and without the associated EGTs. A four-stroke diesel engine ingests its own displacement of air every two revolutions. In fact, an engine’s cubic inch or cubic liter displacement is calculated by this amount of air and the number is unchanging. In other words, a 6.0-liter (366 cu. in.) engine takes in exactly 6 liters (366 cubic inches) of air every two revolutions. The only way to increase this volume of air is to turn the engine faster. To get a diesel to rev higher and live a long life takes an enormous amount of work and is expensive.

There are some less difficult and less expensive ways to provide more density-packed oxygen to the engine. The trick is to make the air denser by increasing airflow. The big improver is an intercooler. A larger and more effective intercooler increases air density by substantially reducing the temperature of the pressurized air from the turbocharger to the intake manifold. By lowering boosted air temperature, the denser air is more oxygenated and allows complete fuel combustion. There is also an excellent byproduct of lower intake air temperatures; they produce lower EGTs. Lower EGTs also help to reduce the thermal load on the engine and its cooling system, which keeps them running cooler as well.

Our Banks Techni-Cooler® intercooler uses a well-engineered cooler core and cast end tanks designed for greater airflow with reduced pressure loss, which improves air density even further. Within most factory intercoolers and surprisingly aftermarket ones as well, the airflow inside is so poor that some cooling passages don’t even get used. In turbo-speak, intercooler effectiveness is measured by its percentage of increase of temperature recovery as compared to ambient air temperature. Gains from the better, larger Banks Techni-Cooler® is one of the best bang-for-the-buck performance available.

Of course, a vehicle’s airbox is where the outside air comes into the engine. Due to cost restraints, factory airboxes usually allow for a well-engineered aftermarket airbox to do a much more efficient job at directing the air into the engine. The best-engineered airboxes are sealed units that take the air in from the front of the vehicle and create the least-restrictive path to the turbocharger.

Aftermarket “filters-on-a-stick” don’t work very well, even if the air filter element has an enclosure around it. They still tend to take in the hot underhood air, which is far less dense than outside ambient air. Remember, just because an aftermarket airbox system or filter-on-a-stick makes more noise, doesn’t mean its making power or increasing air density. This is where our Banks Ram-Air® shines against therest of the competition. Dyno and density-tested cold-air intake actually makes power and increases air density instead of just making more noise.

Improving air density gives your rig the ability for more power at lower EGTs… period. You’ll get higher continuous, useable power-in other words, more of the power you paid for, more of the time. And isn’t that what it’s all about?