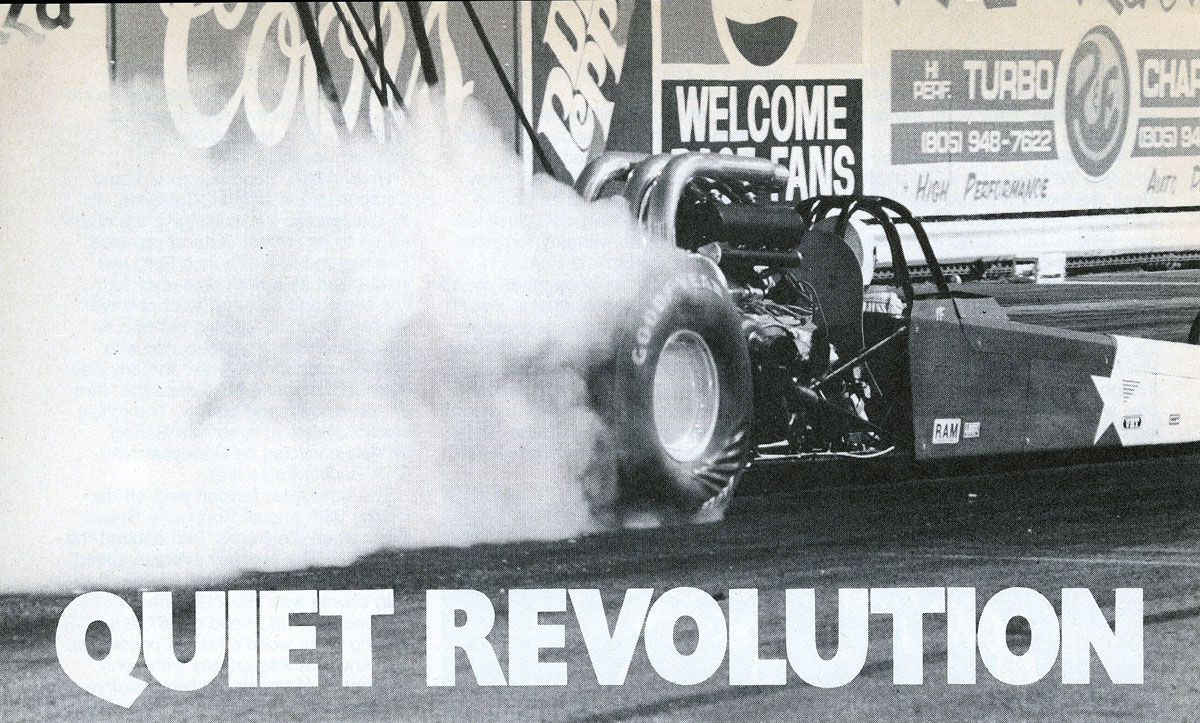 This “Quiet Revolution” ended when NHRA banned turbocharging in the Top Fuel and Funny Car categories, but the science and knowledge live on at Banks.

With the possible exception of Buddy Ingersoll and his amazing “tur-blowed” Buick Regal, the fine art of turbocharging at the digs has been about as successful as the NHRA’s ill-fated nitro ban or its equally unimpressive move toward 1000-foot drags. Throttle lag, lack of control, expense, fear of the unknown, “stand-patism,” and the sanctioning body’s own discriminatory indexing practices have combined to ensure that the exhaust-driven centrifugal superchargers continue to remain in a virtual no-win situation-which could well end in the near future if both Gale Banks and Ron Hodgson succeed in their quiet revolution.

Banks, our choice for the mayor of Irwindale, California, that famed garden spot located at the foot of the majestic San Gabriel mountains, has wanted to develop a turbocharged Top Fueler for years. In fact, he and Paul Candies (of Candies & Huges AA/FC fame) were actually exploring the possibility of fielding a turbocharged Fueler back in ’79. However, the project was shelved when Paul wanted an instant winner and Banks didn’t have the on-hand technology capable of producing one. Meanwhile, another rebel by the name of Rod Hodgson was quietly campaigning a turbocharged Funny Car throughout the great northwest. Gale remembers one day a couple of years ago when, “I got this call from Canada, and after talking for a while all I could think of was ‘oh no, not another one.’ But as the conversation went on I began to realize that I had been sending this guy parts for years, and he was serious about developing a viable turbocharged Top Fueler. We soon got together (December ’84) and started working (spring ’85) on the Banks/Pacemaker turbo-fuel project.”

The first step in this particular effort was, in Banks’ words, “To take today’s state-of-the-art TF technology and use it to baseline our initial experiments. Not only did we have to develop a reliable powerplant (crank, rods, pistons, cams, heads, valves, and ignitions), but we also had to take into consideration factors like port injectors and fuel delivery systems, clutches, gearing, and tires which weren’t ‘geared’ for the unknown, like a twin-turbocharged Top Fueler. There were a lot of balls in the air just to get our foot in the door.”

Unfortunately, turbos have never shown a “commanding advantage” at the drags (except with Ingersoll), so it’s been more like stubbing your toe… even though other racing endeavors like Indy-where turbocharged Offys made 1000-plus hp back in the early 70s — and Formula 1 road racing — where current turbo technology is so advanced that 91-inch fours and sixes are capable of producing 1000 hp on 104-octane gas in qualifying trim — have proven the worth of the little hair dryers. Therefore, it stands to reason that a concerted effort to turbocharge a Top Fuel motor could produce fantastic power gains over the conventional roots-blown engines.

So, testing at Palmdale began in October ’85 with mixed results. The powerplant has functioned as Banks had expected it would and has proven itself to be extremely reliable: one burned piston due to a plugged port nozzle and a couple of kissed pistons and some bent valves when the engine hit an incredible 14,600 rpm after it had twisted off the output shaft on the Lenco. Unfortunately, driveline component failures such as exploding clutches and unreal tire shake, have limited the team to making short launches and long repairs.

From a technological standpoint, the basic problem hasn’t been lag,. a term given to the flat spot during the transition from unblown to blown, because Banks, like Ingersoll, has found ways to make boost off idle. The trouble is that the engine makes boost too fast, like going from normally aspirated (unblown) to full boost (30 pounds) in just two-tenths of a second. Those instant “R’s” twist off shafts, explode slider clutches, and either boil or shake the hides to death. So the team is currently exploring ways to soften the bottom-end in addition to going to a direct-drive combination … and taking advantage of the engine’s extremely wide power range.

In the end, though, Banks, by developing the technology to make turbos work at the drags, is hoping to provide a viable alternative to those $3000-plus-per-run costs that Garlits, Amato,and Bernstein moan about. Banks figures that a complete, twin-turbo package could cost between eight to 10 grand more than a comparable 14-71 roots-blown system. However, the price differential can be made up in two areas: a quantum leap in performance at a much lower cost in fuel and broken parts. “With everything else being equal” says Gale, “a turbocharged engine should make between 30 to 40-percent more power than a roots-blown motor. I understand it takes four to five hundred horsepower to drive a 14- 71, as opposed to the 150 we lose due to ‘pumping loss’ from backpressure. And backpressure can be minimized by camming it right and building an efficient exhaust system.” Right now Banks is running a 50-percent nitro/50-percent alky mix, or about half as much pop as the Top Fuel gang is used to, and still making plenty of power without breaking parts. Also, think of what it must cost when a 14-71 lifts in the lights. Try five grand-plus for what broke inside the motor. Turbos don’t explode like Jimmys because there’s no fuel in the inlet tract. But turbos have been known to experience shaft and impeller blade failure as a byproduct of valvetrain problems, although when Banks’ motor hit that 14,600 nothing happened to the turbos. “What turbos do is to pump cooler, fresher, and dryer air into the engine, and there’s nothing inside the turbos to go bang, nor do turbos need as much spark lead or cam timing as the roots-blown engine.”

But raw power is still the name of the drag racing game. The turbocharged Formula I gas motors are reputed to develop around 11 horsepower-per-cubic-inch. In its present state of under-development, Banks claims his 488-inch KB is producing in the neighborhood of six ponies-per-inch (or 2928 hotpressure) on its conservative 50/50 fuel mix. With more boost (“40 pounds is about peak efficiency for these turbos,” says Banks), more lead (50 degrees), and bigger injectors (Banks has just taken delivery of a second-generation injector that he and Hilborn have collaborated on), plus dual-pattern cams and much-improved fuel delivery capabilities, Gale feels that nine-horses-per-inch (488 x 9 = 4392 hp) isn’t all that far away.

There is no question that the organized drag racing establishment is deathly afraid of turbos. We’ve heard that the newly formed Pro Stock Association is totally opposed to having Buddy Ingersoll join their happy little family, even though Buddy’s turbo Regal is light-years closer to reality than hemi T-Birds or Rat-motored IROC’s. While Banks and Hodgson still have a long way to go to find that elusive engine-clutch-gear-tire combination, think how neat it would be to see roots vs. turbos, noise vs. non-noise, 50-percent motors vs. 90-percent grenades … you know, “ideas in action.” On second thought, isn’t that what drag racing was supposed to be all about in the first place? 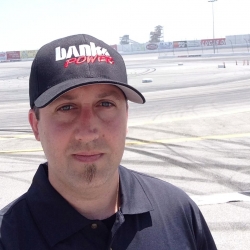