Over fifty years of engineering milestones for Banks Power president and founder Gale Banks began at age 14 with an engine teardown of his mother’s ’31 Ford Model A that resulted in an increase of 65 horsepower. Just two years later, in 1958, Gale was officially in the engine business, first in Lynwood, California, then in San Gabriel. He remains the hands-on president to the 100+ employee-strong manufacturing and engineering complex that today occupies 12 acres in the San Gabriel Valley town of Azusa.

Banks Power is known far and wide as the premier designer and manufacturer of power-enhancing products for diesel- and gas-powered light trucks, motorhomes, and sport-utility vehicles. Since the 1960s, Gale’s futuristic high-performance engines have broken new ground while shattering world records. His marine engines propelled racing boats to national and world championships, and in military mode, his marine engines were chosen to power U.S. Navy SEAL covert-action boats. After decades of racing, Banks Power is still the only company to have set records at Bonneville in both automobile and truck classes.

As a recognized authority, Gale has taught engine design to graduate students at General Motors Institute, covering many subjects: engine architecture, turbochargers (design and application), fuel systems,, Exhaust Manifold, Exhaust systems, marine turbocharging, ignitions and camshafts, intercooling, and more. He currently serves on the SEMA Board of Directors and is an advisor for the Automotive X PRIZE.

Just two years after Gale founded what for decades has been the industry leader in engine performance, he set his first speed record, 189 mph in 1960 at El Mirage dry lake, with a modified 1953 Studebaker. Since then, Gale has been in the winner’s circle countless times, setting a litany of marine and automotive performance marks and laying claim to such titles as World’s Fastest Passenger Car, World’s Fastest Pickup, World’s Fastest Motorhome, and, most recently, World’s Fastest Diesel Drag Racing Truck.

The Banks history is studded with technological achievements, including Gale’s pioneering work in turbocharging marine engines in 1969, the premiere of twin-turbo small-block Chevy engines in 1978, and the invention (and patent) of the Banks OttoMind electronic fuel-management module in 1997.

“I’m a futurist. My entire career has been about what’s next. Through the decades, we at Banks have opened new markets in marine engines, turbocharging, truck and motorhome power systems, turbocharged tuner cars, diesel power systems, electronic tuners, and exhaust brakes. Plus, I’m proud to have worked for many major car and engine manufacturers in defining their future products.” — Gale Banks 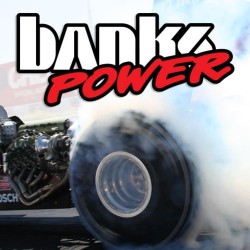